How to fix these errors in Redux-React app? 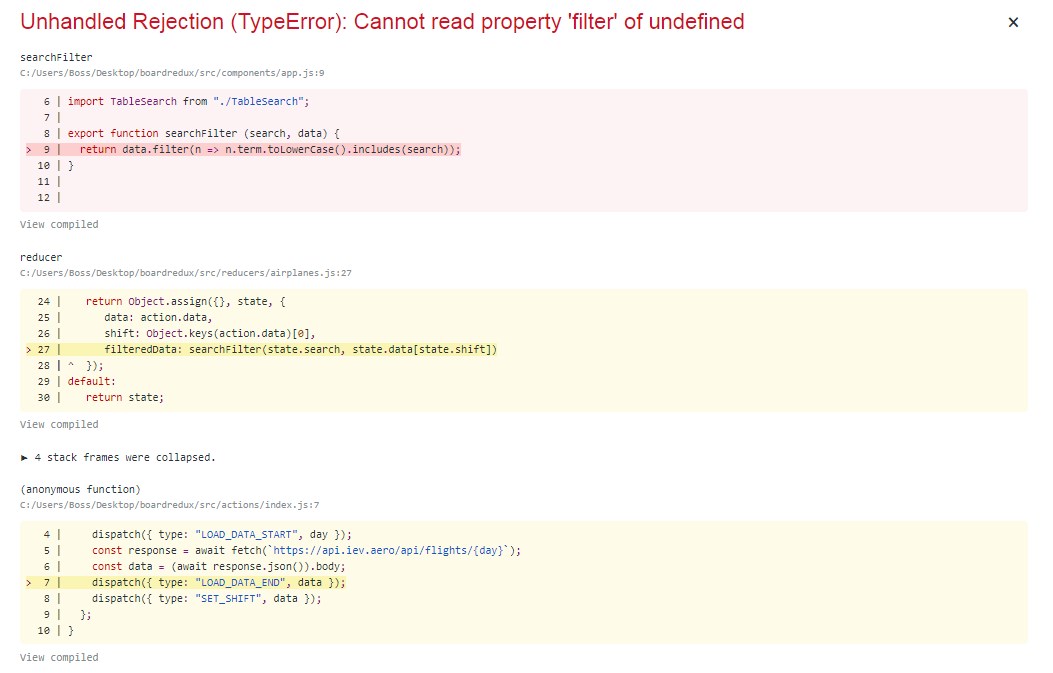 Here I will write only a few major project files

The issue is you're not getting anything back from the API (404). See the image below. 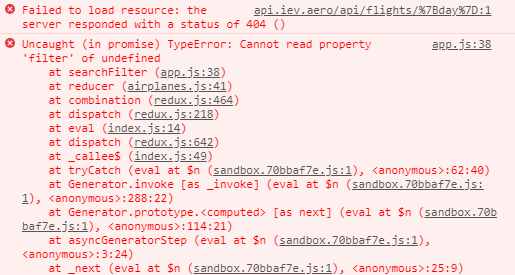 This is because your ${day} value when the component loads is undefined. So your full request URL is https://api.iev.aero/api/flights/undefined which is returning nothing.

Now you're dispatching LOAD_DATA_START so when you get to your reducer and hit the case "LOAD_DATA_START line, action.day is still undefined. So for action.data you're getting an empty array. This brings us to LOAD_DATA_END where you set the state value for shift equal to Object.keys(action.data)[0]. Since action.data is an empty, Object.keys(action.data)[0] is undefined and you're app can't filter with undefined. You need have a default value for this.state.day and use that on your initial fetch.

You need to pass a default value in the initial fetch. Try something like this in your componentDidMount:

There's no need to export the days array just declare it as a variable above of the component.

Next, you were dispatching SET_SHIFT immediately after LOAD_DATA_END and passing data as the payload. This was setting state.shift as the data returned from the initial fetch. So when you tried to filter data by state.shift any other time aside from when you first made the fetch in componentDidMount you were trying to separate the action.data at the key of the entire previously fetched data. I removed this and set it as a separate action entirely.

Now, in order to properly filter your data, I passed both the retrieved data and the passed day in fetchData as two values in the payload for LOAD_DATA_END See below.

And finally, in you reducer under the case for "LOAD_DATA_END", I wrote the below.

What happens here is first you separate the action.payload.data by the key of state.shift, which returns one array, either the arrivals or departures. Then I filter this array based on what flights have an actual (which I assumed was the actual date and time of arrival/departure) that includes the passed day. I have to reverse the date though because in actual the times looked like 2019-08-24T00:27:49Z whereas the day looked like 24-08-2019. This is also why I used includes and not === because actual contains more information than just the date, it also contains the time. Now your data has been properly filtered and can be passed to the final filtration, searchFilter which I will leave up to you to determine how best to filter based on user input (either by time, flight number, terminal, etc).

If you check the codepen, you should now be able to filter by the shift and the day.

Not the answer you're looking for? Browse other questions tagged javascript reactjs redux or ask your own question.