i was wondering how the while loop ever executes. since we set 'next' to be null when we first declare it, when does it get changed to not null? and also what does ' Node n = this; ' mean? Is that meaningful for this code? Whenever we declare a new instance of the object Node, does it make a copy of its own separate fields from the class? Thanks a bunch! I would definitely appreciate clear and easy to understand explanations. Thanks again = )

So you have a class called Node with two instance variables called next and data. They are called instance variables because they belong to the instances of this class rather than to the class itself. That is, your class is basically a template (or blueprint) for objects that each willhave their own data value and next value.

To call this constructor you use the new keyword (in Java I assume) like this;

On that object you can now call the method appendToTail(). Lets say we do this:

A new node named end is created and we set the value 20 to data (remember that d has the value 20 for now because that is the value we passed when we were calling the method). This is a completely independednt node from x with its own unique value for data.

this is a self reference to the current object. Since we called this method on x then this is the same object as x.

This while loop is going to start looking for the end of the list by going from the current node to the next node until the next node is null. Since the only node we created so far is x then n.next is actually null so the while loop does not execute this time.

Now we are setting the next value of n (which is x) to the node end that was created. You now have a list like this:

Suppose you were to make the following call:

Then a similar thing happens except when you get to the while loop the value n.next is not null so you go into the body of the loop and assign n to point to n.next which in our example is the node with 20. The next iteration of the loop would yield the null so the loop will quit and the new node with data 30 will be set to the next value of the last node in the list. So you will have :

To answer your questions:

Q: "since we set 'next' to be null when we first declare it, when does it get changed to not null?"

When you have only one item in the list, the 'next' value of that Node will be set to NULL.

Q: "Whenever we declare a new instance of the object Node, does it make a copy of its own separate fields from the class?"

Instance variables will be created for each individual class that you make an instance of. This means that every Node will have 'next' and 'data'.

Thus, in your creation process, you will probably have something like this: 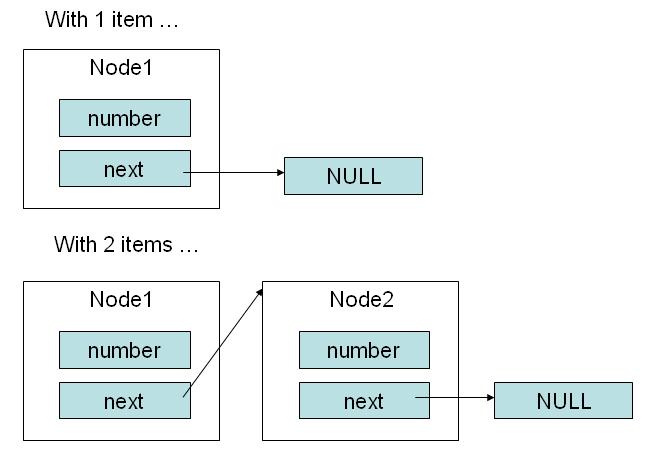 Also, the while loop iterates to the end of the list and appends the item after the last node in the list.

Hope it helps (: If you have any questions, do post back (:

No the node does not copy itself. The point of the linked list is to have a node refer to the next in line. So if you have 3 items in a linkedlist, the first node has a reference to the second, and the second to the third.

will result in node one, having created a new node, and put it in it's next field one.next.data will be equal to 2.

will result in node one referring to node 2, and node 2 will create node 3, and set it as it's next field.

The loop is basically to search the last node in line (because it has it's next set to null).

Not the answer you're looking for? Browse other questions tagged list linked-list initialization or ask your own question.

3231
How do I check if a list is empty?
3706
Finding the index of an item in a list
3113
What is the difference between Python's list methods append and extend?
2018
How to randomly select an item from a list?
2613
How do you split a list into evenly sized chunks?
1896
Why is it string.join(list) instead of list.join(string)?
2441
How to get the last element of a list?
4180
How to make a flat list out of a list of lists?
2091
How do I get the number of elements in a list?
2886
List changes unexpectedly after assignment. Why is this and how can I prevent it?