How can I make symlinks made from inside docker linux containers to be seen from a windows host (maybe involving samba, if needed)

How can I see symlinks of docker linux-containers from a windows host? (Even if I have to place an intermediate linux machine exposing the filesystem via NFS or Samba)

In a DEVEL environment, I have this structure in a certain remote filesystem in a Linux within the office:

both app-1 and app-2 use those libraries which are vendored and symlinked like this:

The developers need to be in Windows.

So the developers have their IDE pointing to some mounted unit, for example Z:\ where they see all the repos and projects.

This allows us the following:

This has been working like this for nearly a decade and works perfectly.

The developers need the connection to the server to develop and we wanted to mutate to local dockers so we can make the devels work from home.

We now decided that we are not going to use anymore the office-servers and we are going to setup all the development within docker containers.

What does actually work

We just installed docker desktop in Windows and shared C:\repos from the host into the dockers.

We now have some devel machines FROM ubuntu:xxx and run them mounting the volumes.

We made the symlinks within the app-1 and app-2 to lib-x and lib-y from inside the linux containers.

Problem with symlinks in linux container and windows host

The problem is now the IDE: While it reads the files in C:\repos\app-1, the symlink that has been created within the linux containers can't be seen from the host.

This makes the IDE to be unable to follow C:\repos\app-1\vendor\lib-x and all the code-completion helpers are broken.

I already know Windows does not support symlink compatible with linux symlinks.

This forces us to look for an alternate solution.

Solution we've though with Samba

Initially I thought that as well as in the old topology a linux server just shared the filesystem via samba and the windows could just read the symlinks contents as they were demapped at the serverside and not the clientside, I thought that I could run another docker machine with a samba server just to locally share the "things seen from the linux" into the Windows host again.

To do so, I setup this docker-compose:

But this conflicts as 445 is locally already used.

If I turn down the local SMB, then in the next reboot, docker is unable to share C:\ into docker (I was not consciuos it does this sharing via SMB, could it be turned into a NFS or so?)

If I map to another port, like 10445:445 then the client is unable to access it, as client samba ports in windows seem to be not configurable.

So I tried to map an IP:

But is seems that this still creates problems:

How could I make a windows host to see the "demapped contents of symlinks" to make the IDE see the vendored content that is linked from inside docker linux containers?

We'll walk thru these steps: 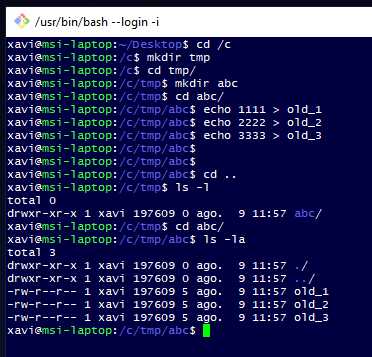 First let's try the "normal" way and see it fail.

Create new_bad in xyz and don't see it in abc. 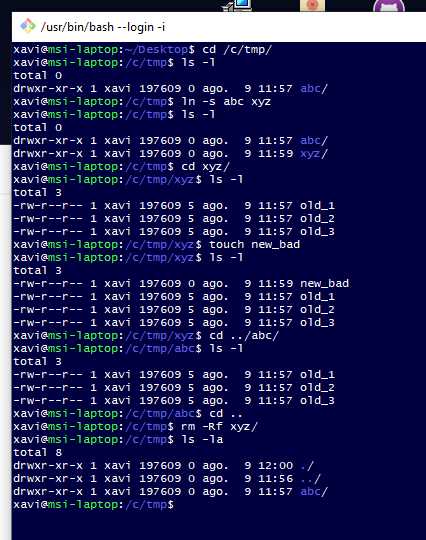 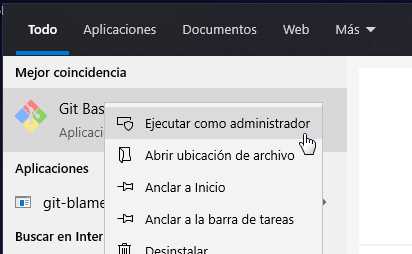 This will tell the runtime subsytem of git-bash to actually use the symlinks feature. As we are admins we'll succeed.

It works!!! Now next move is to test within docker!

NOTE: As per Sebastian's answer here https://stackoverflow.com/a/40914277/1315009 you DON'T need to be administrator to create symlinks in git-bash if you enabled the developer tools. In the search-bar write for developers and enable it: 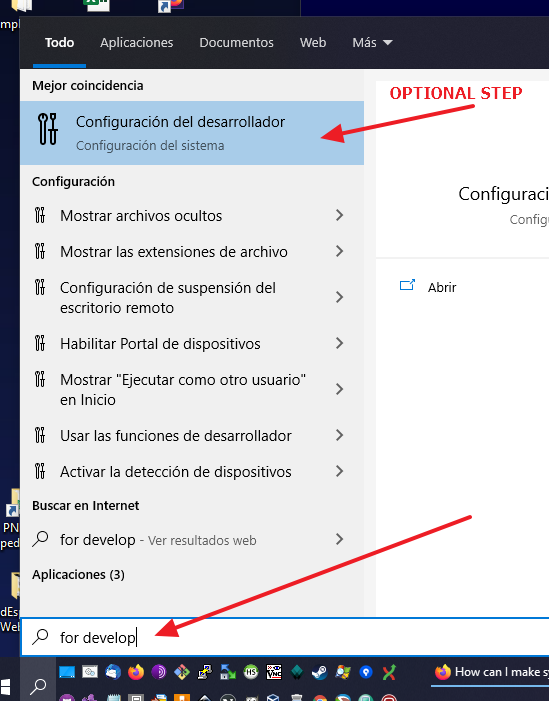 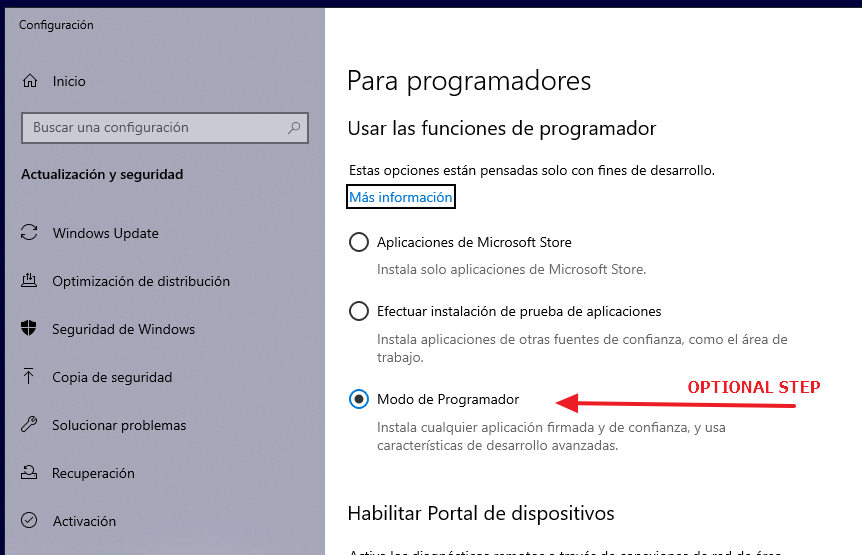 Check it's really a symlink by going to abc: 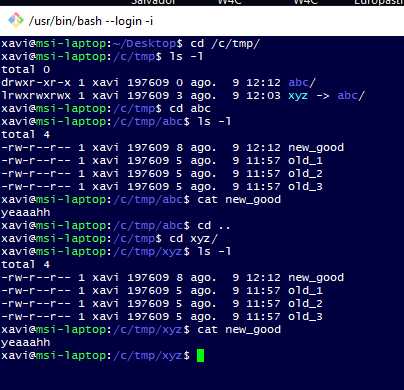 We can finally go to a classical CMD to see how it looks like. We can see it's clearly indicated that it's a symlink for a directory and we also see the target there: 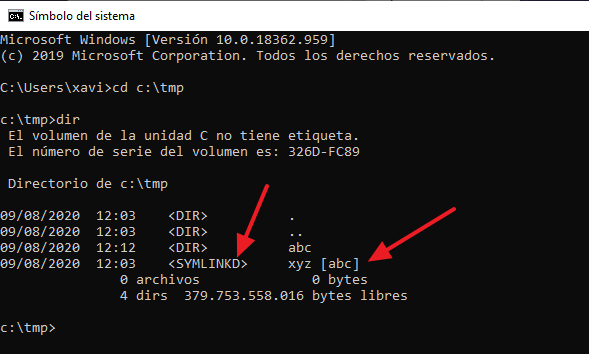 If you have the "developer tools" activates as stated above, the only missing thing is the ENV VAR.

We can set this by editing the .bashrc at your windows home:

By doing this we can just use git-bash completely normally and start creating the symlinks from windows without any overload.

The symlinks created this way work from windows and are seen from inside docker. But not the oposite. If you create symlinks inside the container they don't get created in windows.

It can be done fully from the linux flavour commands via git-bash. Only that you need to be admin to create the links and tell the git-bash runtime to use that feature. And that the link needs to be done from windows, instead from inside the ubuntu.

I encountered a similar problem with my setup: developing on Windows 10 (where both the IDE and Docker are running), and having the website running inside the container (Linux).

I used to work on a library that is required by the website, working on both projects in parallel. And to do so, the library directory was symlinked (in host/Windows) in the vendor path.

But with Docker, that setup doesn't work anymore. So the trick is to mount a volume in docker-compose like this:

So the files in vendor are 'seen' by the web server (inside the container), and we can keep the symlink (made in windows) between the my-package folders, so the IDE sees them as well.

Not the answer you're looking for? Browse other questions tagged windows docker filesystems symlink samba or ask your own question.

1038
How to deal with persistent storage (e.g. databases) in Docker
2062
How to copy files from host to Docker container?
462
How to get the IP address of the docker host from inside a docker container
191
Docker - how can I copy a file from an image to a host?
293
How to mount host volumes into docker containers in Dockerfile during build
697
How to include files outside of Docker's build context?
5
Can I mix linux-based and windows-based containers in same docker engine host?
331
Can Windows containers be hosted on Linux?
150
Settings to Windows Firewall to allow Docker for Windows to share drive