So I have a strange situation with IntelliJ that has me completely stumped. I setup a Maven project and add log4j as a dependency in the pom.xml file. The IDEA inspections run fine and my unit tests all compile and run.

I then added hunnysoft's jmime library to my local maven repository using the mvn install:install-file as follows.

I then went into IntelliJ's Settings => Maven => Repository Services and Updated my local repository (so that IntelliJ would reindex the repository contents).

Finally, I added the following dependency to my pom.xml file (just above the log4j dependency).

I now create a new class as follows:

Now for the weirdness. IntelliJ's intention mechanism picks up and recognizes the Logger import in the maven pom file just fine. However, for all of the hunnysoft imports it reports: "Cannot resolve symbol 'ByteString/Field/FieldBody'", BUT Build => Compile 'StackOverflowQuestion.java' compiles everything correctly and the unit test I created for this class runs fine (though the intentions mark the call to create() as a problem area too).

So somewhere, somehow IntelliJ is ignoring the jmime.jar file for the intention subsystem. I'm confused because the log4j dependency works fine and everything compiles and runs fine. F12 ("Go To Declaration") works on the Logger import, but breaks on all the jmime imports.

Oh, one other thing, if I go to the 'Packages' view in the "Projects" window the "com.hunnysoft.jmime" package appears and I can see ALL of the classes I imported in the code snippet above under "Libraries". Removing the above dependency from the pom.xml file causes this package to disappear and the compilation breaks.

It appears that the inspection's classpath is broken, but there does not seem to be a setting for this anywhere in the Settings => Intentions | Compiler areas (not that I expected any such settings, I believe the IDEA should already know the correct classpath based on the pom file and JDK).

As a final experiment I created a brand new standard J2SE application project (without using maven) and added the jmime.jar file directly to the project as one of its libraries. I run into exactly the same problems as described above in this new project.

I don't see anything unusual in this jar file.

My best guess is that perhaps the problem might be a missing dependency issue. But AFAIK jmime is supposed to be self contained (JarAnalyzer doesn't come up with anything, but I'm not sure it would if a dependency jar is missing).

So, anyone have any IDEAs?

First of all you should try File | Invalidate Caches and if it doesn't help, delete IDEA system directory. Then re-import the Maven project and see if it helps.

In some weird cases compiled classes may report wrong info and confuse IDEA. Verify that the classes from this jar report correct names using javap.

The following trick resolved this issue for me:

None of the solutions above worked for me. What did was removing the main.iml file manually and it suddenly worked.

You may need to synchronize your project with your build.gradle file.

You can right-click on your gradle file under the Project pane to do this, but that didn't seem to do anything for me (I suspect a bug in my version). You'll know if this happens because it wont' kick off any IntelliJ tasks that you will be waiting on. Instead, open up the Gradle Tool pane, then click the synchronize (refresh) button. This worked for me where invalidating the cache and restarting did not.

My own circumstance: I was using a Scala project with Gradle and had to do this.

This was mentioned in another answer to this same question here, but this alone fixes this for me. I do all my builds in a separate terminal, outside of IntelliJ. So the cache's need to have the proper permissions set for the IntelliJ app to read them.

Run it from the project's root folder.

One extra step, when I did File -> Invalidate Caches and restarted the IDE, open a project. It popped up a toastbox on the top-right asking me whether to enable auto-import and that solved the problem.

Inconsistent/duplicate module names in project structure was causing this issue for me.

This can happen when IntelliJ doesn't shut down properly and thus cannot properly save renamed module names.

Has a fixed been published? Appears issue originally affected v11/12 due to a "Compiler overhaul" back in 2013. With discussion on related issues in Jira up to end of 2014. http://youtrack.jetbrains.com/issue/IDEA-98425

Also on Jira IDEA-98425 was marked fixed but unverified (on v12.0.3). None of the following work-around helped resolve this "Unable to Resolve Symbol" issue with Version 13.1.1 on Windows

b. From Maven Projects window,

b.1 mvn -U idea:idea –〉Executing this maven goal suppose to reload the dependencies. This works prev, but since last FRI, executing this maven goal failed as it tried to recompile the project (Of course it fails as "Unable to resolve Symbols", that's what I am trying to fix by running this command in the first place) mvn -version — shows maven version referenced 3.2.5 and that it's working

Nothing works. What's happenning to IntelliJ support on Maven.

I'd assume v12 fixed (although unverified) would be incorporated in subsequent releases. Any one having similar problems with which IntelliJ version? Please share your experience. IntelliJ maven support seems broken.

None of the other answeres worked for me. My imports were not being resolved because IntelliJ pointed to wrong .m2 file.

My location for the .m2 directory was pointed to the wrong path. All I did to fix it was re-point IntelliJ to the right .m2 directory and update it.

I had to change the User settings file: and the Local repository: to the correct location of my .m2 directory.

I got this problem also when I used JDK7_07. I tried all answers here (except deleting IDEA System Directory). But, I still got the problem. So what I did it is:

Install newest JDK (it was JDK7_45), and set the Intellij's JDK to the new one, and it works.

I just had this issue and it would just not go away. I eventually wiped out the IntelliJ config directory in ~ and rebuilt my IntelliJ project from scratch. (This only took about 15 minutes in the end, compared to spending an hour trying to work out problems with cached files, etc.)

Note that my guess is that the initial problem was caused by something like javathings.blogspot.com/2009/11/too-many-open-files-in-intellij-idea.html (NB: as of 2018, that link is dead, but archive.org has a copy of the page from around when this answer was first written -ed.) or a disk space/memory issue causing Java to crash. IntelliJ seemed to just get corrupted.

If your maven project is a multi-module project, check if some of the modules are ignored by intellij. 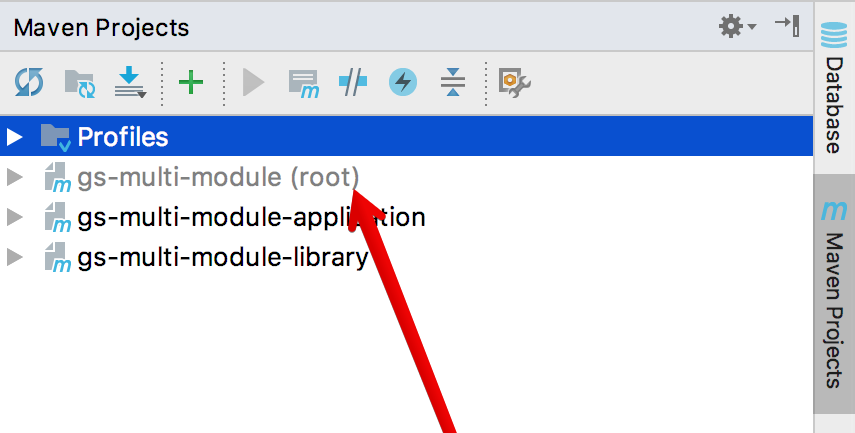 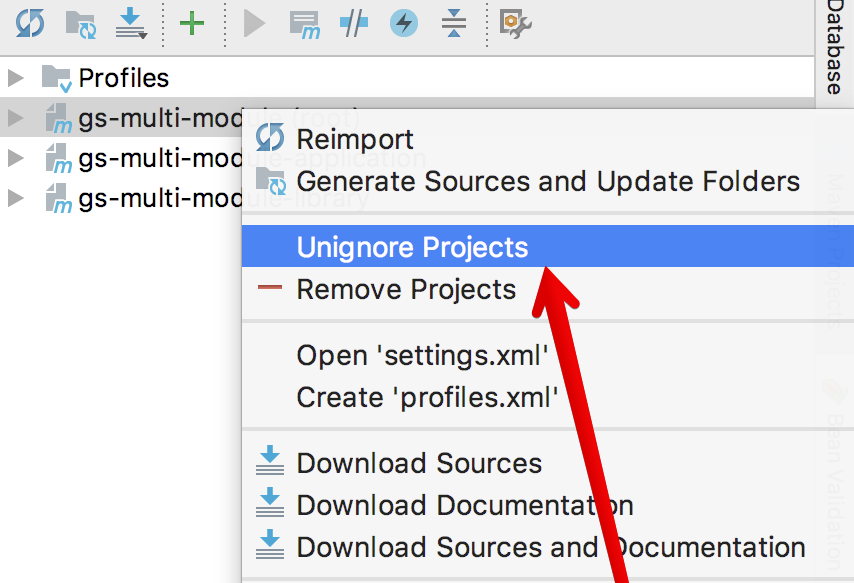 Then wait for intellij to finish indexing, after which it will work.

After invalidating my cache and restarting; and confirming my maven settings were okay, I was still seeing "Cannot resolve symbol" for a module that I definitely had set as a dependency. Turns out I had it set to the wrong scope.

You can check by right clicking on your module and selecting Open Module Settings. Click the dependency tab and verify that the scope for your un-resolvable dependency is set to Compile.

Re-importing the project worked for me. Right Click on Project -> Maven ->Reimport

when I did File -> Invalidate Caches and restarted the IDE,open a project. It showed a dialogue on the top-right "Maven changes detected" and gave an option to import and enable auto-import. Even after importing the project here, I had the same issue. The above step solved the problem.

In my case, I am trying to open a spring boot project from IntellijIdea got the same issue like unable to import all spring related files.

Now everything working fine as expected.

I have seen many answers here but I finally found this solution. It may use for someone like me.

Yes, sounds like you have to create libraries containing the JARs you need and add them as a dependency in your module.

In my case, only buildDir is removed. In this case, File | Invalidate Caches does not work.

When I do Build | Make Project before File | Invalidate Caches, everything works fine.

None of the above solutions solved it for me. I had the same issue where the code compiled fine but IntelliJ showed that it could not find the import. Even though IntelliJ suggested the import in the first place from code completion.

Suggested solutions did not work. I had to unignore several projects, by right clicking on the pom => maven => unignore project.

in the console, IntelliJ was happy again. No idea how the projects became ignored...

mvn idea:idea worked for me. Found it here. Spent more than an hour, hope it helps someone

Remove the :iml file found in java and test folders inside the project and invalidate and restart .

It will ask can I remove the projects . Put Yes. The error will goes off.

What worked for me was to "Mark as directory source root" the directory in which the red marked class was, after it the red mark disappeared. Seems that for some reason it was unmarked.

Invalidate Caches worked for me but after running the application had the same error.

So I tried (Intellij):

Hope this works for you.

Or maybe the file you import is too large.this is my case,when I change the Intellij property: iead.max.intellisen.filesize (path is ${idea dir}/bin/idea.properties) to a larger value,like 25000, and restart the IDE,the problem disappeared. Hope this helps.

Not the answer you're looking for? Browse other questions tagged java maven intellij-idea intellij-inspections or ask your own question.

733
Correct way to add external jars (lib/*.jar) to an IntelliJ IDEA project
518
How to build jars from IntelliJ properly?
230
Maven: add a dependency to a jar by relative path
411
Maven does not find JUnit tests to run
398
IntelliJ - Convert a Java project/module into a Maven project/module
207
Import Maven dependencies in IntelliJ IDEA
128
Intellij idea cannot resolve anything in maven
84
Maven package works but Intellij's build fails
215
How do I change the IntelliJ IDEA default JDK?
0
Intellij Maven Cannot Resolve Dependencies