Difference between nil, NIL and, null in Objective-C

I want to know the difference between nil, NIL and null. I've googled around and found this:

null -> null pointer to primitive type or absence of data

But I'm not able to understand the terms "Objective-C object" and "class" clearly.

Please explain this to me. Also, is there any word like NSNull or NSNil in Objective-C? If so, then please explain for what it is for.

nil is the literal null value for Objective-C objects, corresponding to the abstract type id or any Objective-C type declared via @interface. For instance:

Nil is the literal null value for Objective-C classes, corresponding to the type Class. Since most code doesn’t need variables to reference classes, its use is not common. One example is:

NULL is the literal null value for arbitrary C pointers. For instance,

NSNull is a class for objects that represent null. In fact, there’s only one object, namely the one returned by +[NSNull null]. It is different from nil because nil is a literal null value, i.e., it isn’t an object. The single instance of NSNull, on the other hand, is a proper object.

NSNull is often used in Foundation collections since they cannot store nil values. In the case of dictionaries, -objectForKey: returns nil to indicate that a given key has no corresponding object in the dictionary, i.e., the key hasn’t been added to the dictionary. If you want to make it explicit that you have a certain key but it doesn’t have a value yet, you can use [NSNull null].

For instance, the following throws an exception because dictionaries cannot store nil values:

On the other hand, the following code is valid since [NSNull null] is a non-nil object:

It’s worth mentioning that Foundation collections have initialisers that use nil as a marker for the end of a list of objects without having to specify the number of elements in the list. This can only happen because nil cannot be stored in a Foundation collection. For instance,

As for NIL or NSNil, there are no such things in Objective-C or Apple Foundation.

I am not sure but i think nil should only be used in place of an id, what Java and C++ programmers would think of as a pointer to an object. Use NULL for non-object pointers.

nil is usually used for an Objective-C object type, while NULL is used for c-style pointers

Nil,Null and nil are used with below

Suppose you have a class MyClass then by convention nil is used if you want to initialize its instance to null value (same as null in java) i.e.

It's just a convention otherwise Nil or nil have same meaning and perhaps NULL , nil or Nil all are same.

Here is the definition for these in objc.h file

And the definition of __DARWIN_NULL in _types.h

So there is no difference logically. The main idea here is to initialize a pointer whether C or Objective-C to 0. If you have knowledge of C then you can assign

In short they all are 0 and nothing else.

This will help you to understand the difference between nil,NIL and null.

All three of these values represent null, or zero pointer, values. The difference is that while NULL represents zero for any pointer, nil is specific to objects (e.g., id) and Nil is specific to class pointers. It should be considered a best practice of sorts to use the right null object in the right circumstance for documentation purposes, even though there is nothing stopping someone from mixing and matching as they go along.

The below link may help you in some way:

Here is some important part from the link: 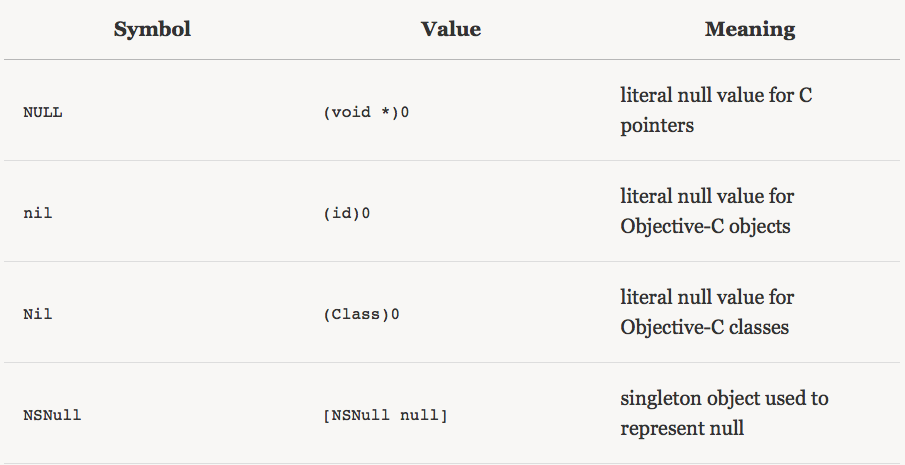 nil, NIL and null. is depended on your requirement.

collections like NSArray and NSDictionary not being able to contain nil values.

all pointers that object has to other objects begin as nil, so it's unnecessary to, for instance, set self.(association) = nil in init methods.

In other languages, like C++, this would crash your program, but in Objective-C, invoking a method on nil returns a zero value.

Not the answer you're looking for? Browse other questions tagged objective-c null nsnull or ask your own question.

0
Why do we need many types of “null” in objective-C?
170
When should I use nil and NULL in Objective-C?
9
Is nil and (NSString *)[NSNull null] equivalent in checking empty NSString object
11
iPhone : Difference between nil vs Nil and true vs TRUE
8
What are the differences between nil, NULL and [NSNULL nil]?
0
Retrieving values from NSUserDefault - error
0
Passing Null Values and a variable in to NSMutableArray/NSArray. Why is there a difference in output?
-1
Getting error like “Implicit declaration of function 'IS_NOT_NIL_OR_NULL' is invalid in C99”
1
Undeclared Identifier - Xcode 4
0
Exception datasource must return a cell in tableView with customCell
See more linked questions