I'm looking over the outcome of some simple C# code that just adds 10 mil elements to an ArrayList (efficiency is not the point, I just needed something that triggers GCs).

.NET Framework 4.7.2 is used. GC is running in the default Concurrent Workstation mode, on a Windows 10 x64 OS.

BenchmarkDotNet (BDN) is used to profile the code and PerfView runs at the same time to collect GC info. I simply mention BDN since the induced GCs seen before and after the code runs are actually coming from it; it plays no other role in the problem at hand.

Looking over PerfView's GCStats data, and focusing only on one single run of the code, we get this output: 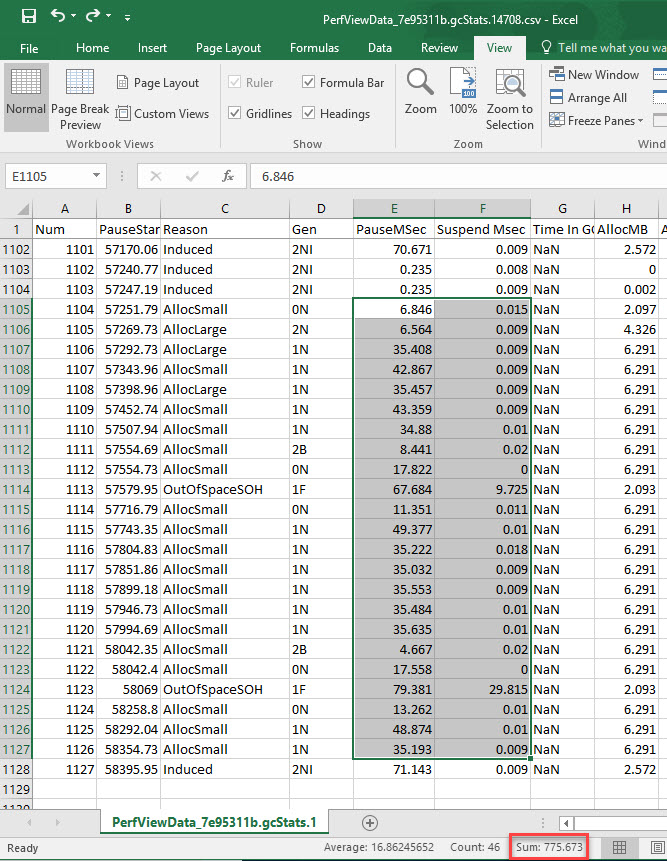 Let's take a closer look for what happens during the last background GC (2B), from within PerfView, by looking at the ETW events themselves:

In this context, why isn't the gen0 GC - reported as NonConcurrentGC - actually marked as ForegroundGC, just as the gen1 GC is ?

It's not a one-off thing either: the pattern of the BGC gen2 triggering one non-concurrent gen0 and a foreground gen1 GC is repeated.

Browse other questions tagged c# garbage-collection clr or ask your own question.

1
What exactly gc_heap::plan_phase does?
5
Missed Garbage Collection Notifications
2
'Implicit' Garbage Collection doesn't reduce memory footprint. GC.Collect() does
24
Gen2 collection not always collecting dead objects?
337
Why should I use IHttpActionResult instead of HttpResponseMessage?
4
Why doesn't my Task.ContinueWith execute in .NET 4.5?
12
Debugging a CLR hang
3
Condemned Generation is Not Garbage-Collected