Condemned Generation is Not Garbage-Collected

I'm analyzing the outcome of some simple C# code, in terms of GC performance. I've used PerfView with GC Collect Only ticked to gather meaningful info. 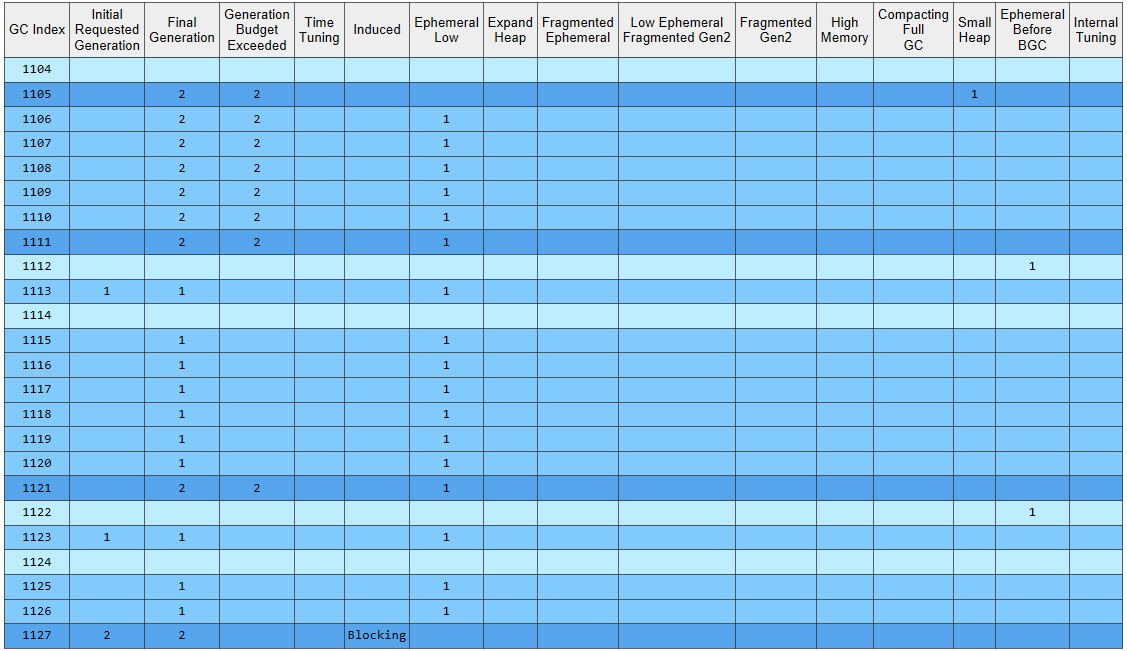 In a blogpost by Maoni Stephens, the owner for the .NET GC, we know that once a GC is started, it can act against a higher gen, as follows:

Now after the GC starts, we then decide what generation we would actually collect. It might stay as a gen0 GC, or get escalated to a gen1 or even a gen2 GC – this is something we decide as one of the very first things we do in a GC. And factors that would cause us to escalate to a high generation GC are what we called “condemned reasons” (so for a GC there’s only one trigger reason but can be multiple condemned reasons).

Based on the Condemned Reasons table, it turns out both #1106 and #1108 "elevate" themselves from gen0 GCs to gen2 GCs due to both breaking the threshold for allocations in gen2.

1) Both #1106 and #1108 start off as gen0 GCs, get eventually "escalated" to gen2, but show up in GCStats as gen1 GCs ? Please note that this is not some PerfView issue, as the detailed ETW events show the same exact data in terms of generations.

2) Both #1106 and #1108 get registered as gen1 GCs, but with a reason of AllocLarge ? AllocLarge refers to the large object allocation threshold exceeded, and the LOH can only be processed as part of gen2 collections.

The data above was captured on a .NET Framework 4.7.2 running on a Windows 10 x64. I'm assuming though that the concepts behind the GC decisions would be largely the same for other, relatively recent versions of .NET Framework, or even .NET Core, so this should make little difference to what's being asked here.

I've also not burdened the question with the actual code, since what's causing the GCs to occur in the form explained above is not triggered by any special instruction, but by the inner decisions the GC takes.

Update 1: I've provided more data to the initial question. I've also specifically looked at and couldn't find any other Microsoft-Windows-DotNETRuntime* ETW event around GCs #1106 and #1108 referenced that could shed more light on either question.

Update 2: I've changed the name of the question, since there are no gen2 GCs occurring after all. The CLR is performing only gen1 GCs for #1106 and #1108, as the column for the gen2 survival rate states NaN, which implies no gen2 GC has run.

Looking over the .NET Core CLR source code (for inspiration as what might happen in .NET Framework), the function that does the actual GC work gc_heap::gc1 reads early on the condemned generation info (below), and provided this is a non-concurrent GC (similar to our #1106 and #1108) it proceeds with the mark phase against the respective generation. 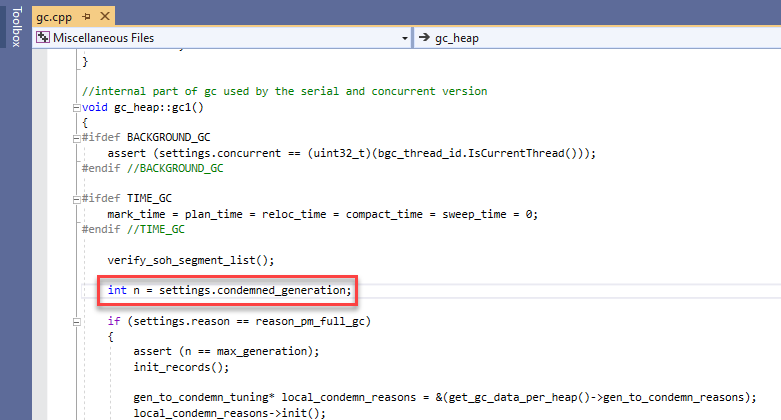 As for the chosen condemned generation, within gc_heap::generation_to_condemn the check for the highest gen budget allocations exceeded is done before the check for low ephemeral segment, and the latter doesn't overwrite the decision, but simply selects the max between whatever generation was deemed condemned before and its own selection. Nonetheless we know the final generation is chosen correctly, as the number of the condemned (final) generation is 2 in GCStats. But why isn't the GC acting on this decision ?

Thank you for reporting the issue to us. We have been working on the issue for a while now. The runtime support for recording the actual reasons in the runtime is already merged, and the tooling support for displaying the reasons is also mostly done, the remaining work is simply polishing the UI.

Once these changes are merged, it will be available in the next version of .NET Core and PerfView. This should make the data more accurately describe what is happen in the runtime.

For your question 1, the case for #1106 and #1108 is probably avoid_unproductive. My changes will reflect this information to the trace.

I've reached out to Maoni, and she was kind enough to point out that the behavior observed in this question is due to a tuning logic that prevents consecutive gen2 GCs from occurring, instead falling back to gen1 GCs.

There's work underway to get this backing-away-from-gen2-GCs behavior logged appropriately using ETW, at least using .NET Core, and Maoni opened an issue specifically for this here.

Not the answer you're looking for? Browse other questions tagged c# .net .net-core garbage-collection clr or ask your own question.

15
.NET generation 0 heap size
1741
How do I remedy “The breakpoint will not currently be hit. No symbols have been loaded for this document.” warning?
3
.NET object creation and generations
107
Why Large Object Heap and why do we care?
0
How to get the heap memory allocated to each generation (Gen0,Gen1,Gen2)?
2
Managed heap in CLR
1518
Why not inherit from List<T>?
2
Does CLR reuse object in LOH by default?
913
What is the difference between .NET Core and .NET Standard Class Library project types?