The diagram below depicts a network that involves the aggregation of three slow channel throughputs over a WAN. Each router attempts to reassemble the fragmented IP packets which leads to data loss because the fragments take random paths through the three routers and often one router cannot collect all of the packet fragments for successful reassembly.

The IP traffic from the fast host arrives fragmented and randomized at the three routers (but always from 54.239.98.8). I have no control over this fragmentation (corporate politics, go figure) - I suspect the fragmentation is done on purpose by the fast host.

I have modified the kernel module nf_defrag_ipv4 to disable the offending defragmentation in the PREROUTING hook as follows:

The complete source code of this module can be viewed here.

Is there a better solution? Especially a way to selectively disable IP defragmentation only for packets coming from the fast host on the WAN @ ip.src == 54.239.98.8. 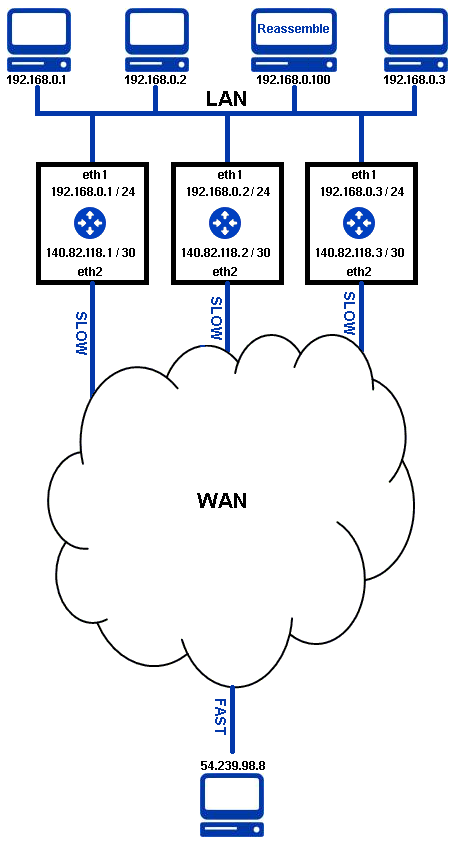 309
Why do you have to link the math library in C?
0
Disabling mysql access using firewall
0
Monitoring fragmented packets after reassembly
3
Retransmitting large packets with raw sockets
0
How to set the UDP packet reassembly timeout in Windows 10
1
which data structure to choose for ip datagram reassembly at receiver end?