When I type the create-react-app my-app command in my terminal, it appears to work - downloading all libraries successfully etc. At the end of that process however I get a message that a template was not provided.

I checked out the CRA changelog and it looks like support was added for custom templates - however it doesn't look like the command create-react-app my-app would have changed.

Any idea what is going on here?

Use either one of the below commands:

There seems to be a bug where create-react-app isn't properly uninstalled and using one of the new commands lead to:

A template was not provided. This is likely because you're using an outdated version of create-react-app.

Then one of these ways:

Though already lots of answer is here. I came up with 3 solutions which I applied step by step when I faced this situation.

You can use these commands below:

Sometimes it may keep caches.then you can use these commands given below.

NB: I succeed in the last step.

then in your project directory:

To add up more to the answers above:

With the new release of create-react-app, you can create a new app using custom templates. Two templates available so far:

More details of the latest changes in create-react-app:

I too had the same problem. When I trid the npm init react-app my-app command returned the same message

A template was not provided. This is likely because you're using an outdated version of create-react-app.

Clear your npm cache first then use yarn as follows:

...you might want to try the following after I have looked into this problem further:

If I wanted to then create a react app in a directory called client then I would type the following command into the terminal:

So I've gone through all the steps here, but non helped.

CRA was not installed globally - didn't find it in /usr/local/lib/node_modules or /usr/local/bin either.

Then I came across this comment on CRA's github issues. Running the command with the --ignore-existing flag helped.

These two steps worked for me

1) Uninstalled react-app globally with this command

2) Installed react-app in project folder with this command

work for me after trying all the answers hope that can help someone in the future.

This is reported at https://create-react-app.dev/docs/getting-started/. For me, this did not work. I had to re-install create-react-app globally instead.

My steps to fix this problem were to:

All of the option didn't work for me on MacOS. What did work was the following 3 steps:

For Linux this worked for me

If you want to continue using the create-react-app command, you'll need to update the global package using npm update -g create-react-app. Note that you'll want to do this periodically to keep it up to date. You'll notice that create-react-app does not recommend this (noted in the logs from your install).

A better approach would be to delete the global install entirely (npm uninstall -g create-react-app) and instead use npx so that it grabs the latest version of the package every time (more detail on npx below).

You should confirm that it was uninstalled globally by trying to use create-react-app to make sure the command is "not found".

You can debug where it was installed using which create-react-app. If you're having issues uninstalling it, you may have multiple versions of node/npm on your machine (from multiple installs, or because you use a node version manager such as nvm). This is a separate issue I won't address here, but there's some info in this answer.

A quick nuclear approach would be to forcefully remove it (rm -rf) at the path that which create-react-app returns.

$ NPM_PACKAGE_NAME will always use the globally installed version of the package, regardless of which directory you're in.

$ npx NPM_PACKAGE_NAME will use the first version of the package that it finds when searching up from the current directory to the root:

More info about npx can be found in this answer.

create-react-app has some special commands/aliases to create a react app (instead of npx) that are specific to that package (yarn create react-app, npm init react-app), but npx create-react-app will work the same as it does with other packages.

Yarn stores global installs in a different folder than npm, which is why yarn create react-app would work immediately without uninstalling the global npm package (as far as yarn is concerned, the package hasn't been installed).

This is just a temporary solution though, as you'll need to remember to always use yarn instead of npm when using Create React App.

This works for me!

this will automatically create the template for u .

This problem is not solved like this, the problem is in the different instances of node, try removing globally create-react-app and then delete the node_modules and package-lock.json from your root user

This work's for me :

After that in your project directory:

This may happens because of the cashes. So next run

Now its all clear. Now run

Now you will get what you expected!

I fix this issue on Mac by uninstalling create-react-app from global npm lib, that's basically what said, just try to do, you need also do sudo:

Now should be all good and get the folder structures as below: 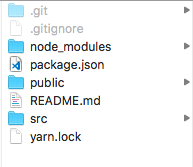 Such a weird problem because this worked for me yesterday and I came across the same error this morning. Based on the release notes, a new feature was added to support templates so it looks like a few parts have changed in the command line (for example, the --typescript was deprecated in favor of using --template typescript)

I did manage to get it all working by doing the following:

If it works, you should see multiple installs: one for react-scripts and one for the template. The error message should also no longer appear.

npm uninstall -g create-react-app could be an answer in some cases, but not in mine.

After that create-react-app will be working correctly.

This worked for me 1.First uninstall create-react-app globally by this command:

If there you still have the previous installation please delete the folder called my app completely.(Make sure no program is using that folder including your terminal or cmd promt)

2.then in your project directory:

For any Windows users still having this issue, this is what fixed it for me:

Step #4 will vary based on your configuration, but that's just what got me up and running.

One of the easiest way to do it is by using

This will remove the old cached version of create-react-app and then get the new version to create the project.

Note: Adding the name of the project is important as just ignoring the existing create-react-app version is stale and the changes in your machines global env is temporary and hence later just using npx create-react-app [project name] will not provide the desired result.

this seems to be the way to make it work.

After using this command:

Helen_CEEHelen_CEE
3933 bronze badges
Add a comment  |
1
2 Next
Highly active question. Earn 10 reputation (not counting the association bonus) in order to answer this question. The reputation requirement helps protect this question from spam and non-answer activity.