Currently, I start at the top-left most rectangle and see if I can expand it out right and down while keeping it a rectangle. I do that until it can't expand anymore, remove and split all intersecting rectangles, and add the expanded rectangle back in the list. Then I start the process again with the next top-left most rectangle, and so on. But in some cases, it doesn't work. For example:

With this set of three rectangles, the correct solution would end up with two rectangles, like this:

However, in this case, my algorithm starts by processing the blue rectangle. This expand downwards and splits the yellow rectangle (correctly). But then when the remainder of the yellow rectangle is processed, instead of expanding downwards, it expands right first and takes back the portion that was previously split off. Then the last rectangle is processed and it can't expand right or down, so the original set of rectangles is left. I could tweak the algorithm to expand down first and then right. That would fix this case, but it would cause the same problem in a similar scenario that was flipped.

Despite the title to your question, I think you’re actually looking for the minimum dissection into rectangles of a rectilinear polygon. (Jason’s links are about minimum covers by rectangles, which is quite a different problem.)

David Eppstein discusses this problem in section 3 of his 2010 survey article Graph-Theoretic Solutions to Computational Geometry Problems, and he gives a nice summary in this answer on mathoverflow.net:

Here’s my gloss on this admirably terse description, using figure 2 from Eppstein’s article. Suppose we have a rectilinear polygon, possibly with holes. 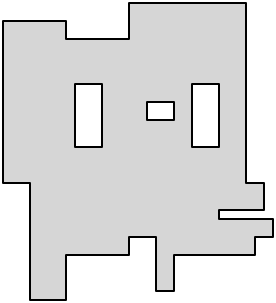 So let’s draw the axis-parallel diagonals between two concave vertices that are contained entirely within the polygon. (‘Axis-parallel’ means ‘horizontal or vertical’ here, and a diagonal of a polygon is a line connecting two non-adjacent vertices.) We want to use as many of these lines as possible in the dissection as long as they don’t intersect. 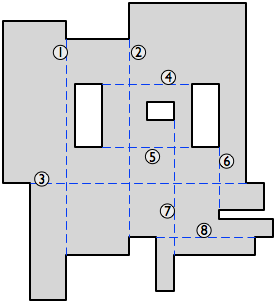 It’s bipartite with the vertical diagonals in one part, and the horizontal diagonals in the other part. Now, we want to pick as many of the diagonals as possible as long as they don’t intersect. This corresponds to finding the maximum independent set in the intersection graph.

Finding the maximum independent set in a general graph is an NP-hard problem, but in the special case of a bipartite graph, König’s theorem shows that it’s equivalent to the problem of finding a maximum matching, which can be solved in polynomial time, for example by the Hopcroft–Karp algorithm. A given graph can have several maximum matchings, but any of them will do, as they all have the same size. In the example, all the maximum matchings have three pairs of vertices, for example {(2, 4), (6, 3), (7, 8)}: 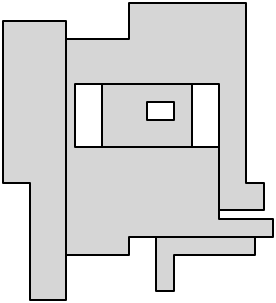 Finally, make a cut from each remaining concave vertex to complete the dissection: 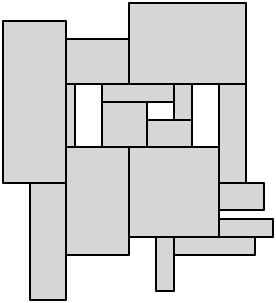 Today I found O(N^5) solution for this problem, and I will share it here.

For the first step, you need to find a way to get the sum of any rectangle in a matrix, with complexity O(1). It's pretty easy to do.

Now for the second step, you need to know dynamic programming. The idea is to store a rectangle and break it into smaller pieces. If the rectangle is empty, you can return 0. And if it's filled, return 1.

There are N^4 states to store the rectangle, plus the O(N) complexity for each state... So you will get an O(N^5) algorithm.

Here's my code. I think it will help.

The input is simple. N, M (size of matrix) After that, the following N lines will have 1s and 0s. Example:

Not the answer you're looking for? Browse other questions tagged algorithm language-agnostic geometry rectangles or ask your own question.