Can someone explain, step by step, what this function is doing

Imo, a the best way to wrap you head around any recursive function is to write down (like on paper, old-school style) what is happening in some form.

Why use paper? It's easier and faster to draw random stuff than on a computer. This one is fairly simple, but with more complicated recursion it may be impractical to write everything out explicitly. In those cases, I like to summarize stuff symbolically, draw diagrams etc.

Second best is to make it print stuff in a small example. To do that, let's modify your initial code a bit.

If you then compare this to this

Notice how your first call, not satisfying the base condition (n==0) continues to "drill down" into the recursion. Once the base case is reached, then the recursion unstacks the calls - you move out from the LAST recursive call (n==1, the first move disk). Then n==2 (the 2nd move disk) etc....

Perhaps not so ironically, the tower of Hanoi itself is a pretty good analogy for how recursion works: you essentially stack calls (e.g. what you're eventually going to do) into a big pile. Then once you're done stacking new calls (e.g. you've reached your base case, n==0 here) then you pick up whatever call was last put onto you callstack & execute that.

EDIT: I've removed the n==0 calls to Hanoi (since they don't do anything and just confuse stuff). I've added in parenthese the step in the image that corresponds to each call on the image (2), (3), etc.... Each # will be present twice - once when we execute it (e.g. "move disk from...") and once when we put onto our callstack ("Hanoi called....").

It helps to formulate the problem in pseudocode first:

This pseudocode can be immediately translated to Python code. Your base case with n = 0 is just another way to write this, because for n=1 both function calls in the else block won't do anything (the base case n=0 is just pass).

A recursive function has two important properties: 1. First, it defines a base case with a trivial solution, which is given directly. 2. Otherwise, it explains how the solution can be obtained from partial solutions; for this, any function can be used, including the recursive function itself. The only important thing is that it's called with reduced input data, so that at some point the base is hit.

Concerning your questions: "But it seems to me that {f} can only ever be "a" or "b"? ... But I don't understand what's happening with larger values for n."

No, {f} becomes the "origin", "destination" and "helper" rod dependent on the situation. It can help to write the function calls down for a small n, e.g. n = 3, and draw the recursion tree (a popular example is the recursive Fibonacci function). E.g., if n = 3, this is what happens:

In general, it's hard to really "think recursively". It helps to think about your function as a regular function, which can use any other function to achieve the desired result, including itself, but with a reduced data set. The base case makes sure that it doesn't run forever.

6: run hanoi with inputs switched around

8: Run hanoi with those steps

This is just explaining the code here to help you, not tell you what it does exactly.

This is relate to the Tower of Hanoi function as you mentioned and here is a more in depth detail. It is recursive because it runs the function within itself.

For your example of 3 disks hanoi(3,"a","b","c"), the best explanation IMHO is in the picture on this blog: 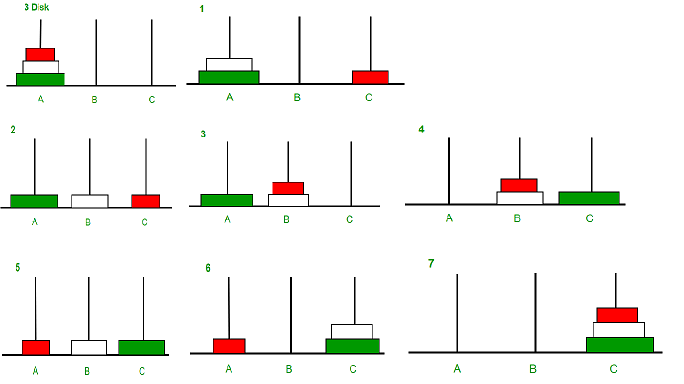 It explains all the steps (from 0 to 7) by picture.

For the case of an unknown n value, a possible situation when to use this function is when you have:

Not the answer you're looking for? Browse other questions tagged python recursion or ask your own question.