How to display a progress indicator overlay/HUD on iPhone?

I want to display a progress indicator in a semi-transparent box that floats over a table view. In other words, when the table contents are being downloaded, I want an "Updating" label to appear over it.

I have seen this in several apps in the store, notably Facebook (when you shake to reload) and Darkslide.

My first impulse is to create a semi-transparent UIView, place a UILabel and a UIProgressIndicatorView inside it, and add it to the view hierarchy... but where? A UIView may not overlap its siblings, so I can't make it a subview of the window. I also can't make it a subview of the table, because then it will scroll up and down with the table content.

I thought about creating a new UIWindow, but the documentation basically says don't.

Edit: The question was based on a faulty assumption. NSViews (on Mac OS X) may not overlap, but UIViews on the iPhone may.

You can definitely overlap views. Just add the transparent overlay as a subview in the tableView.

UIView objects are arranged within an UIWindow object, in a nested hierarchy of subviews. Parent objects in the view hierarchy are called superviews, and children are called subviews. A view object claims a rectangular region of its enclosing superview, is responsible for all drawing within that region, and is eligible to receive events occurring in it as well. Sibling views are able to overlap without any issues, allowing complex view placement.

I've just posted a HUD version of mine : https://github.com/y0n3l/LGViewHUD

you can get this result very easily : 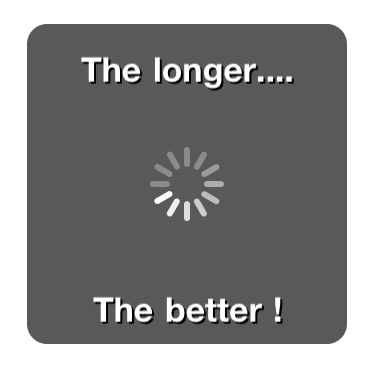 Once the task is ended, just invoke

MBProgressHUD seems now more popular (if we base on github stars)

Any object that lives in your MainWindow.xib can get access to the application window via an outlet. The application delegate in the standard projects already has it, but you'll probably want to add the outlet to your view controller that needs to show the progress overlay.

Since in UIKit the UIWindow is a UIView (unlike NSWindow vs. NSView in Cocoa), you can simply add your progress view as a subview of the window:

This example uses the technique to fade out the Default.png splash image:

With relation to the recent edit, as of MacOS X 10.5 Leopard NSView overlapping is deterministic (they always could overlap, you just got undetermined results), though it has a different front-to-back ordering depending on whether the containing view is layer backed or not. This is most likely a side effect of integrating CALayers into the OS X view system.

Currently I'm into over laying transparent views (at least on the back of a napkin at this point). You can use them to hold menu buttons, move them in 3D space, just get nuts.

I mean is this a religious tract of or what? Amazing stuff from the guys at NEXT:

UIView objects are arranged within an UIWindow object, in a nested hierarchy of subviews. Parent objects in the view hierarchy are called superviews, and children are called subviews. A view object claims a rectangular region of its enclosing superview, is responsible for all drawing within that region, and is eligible to receive events occurring in it as well. Sibling views are able to overlap without any issues, allowing complex view placement.

Not the answer you're looking for? Browse other questions tagged iphone cocoa-touch core-animation or ask your own question.

524
How to programmatically send SMS on the iPhone?
1179
How can I develop for iPhone using a Windows development machine?
0
iPhone Layer confusion
1
iPhone: how do I set up a clear window-size “blocker view”?
13
Adding a UINavigationController as a subview of UIView
28
Add UIView Above All Other Views, Including StatusBar
1
Hiding/Removing/Fading CALayer erasing NSView contents
7
Using CALayer as a background for other NSViews
0
UIView animation makes flashscrollindicators behave weirdly
1
Using an AVPlayerLayer as the backing layer for an NSView