The above code works as expected.

P.S. The reason I believe that the number of sectors per track is 63 is because simply setting cl = 64 also does not work

TL;DR: The size of a drive (or drive image in emulators or virtual machines) may impact the number of heads, cylinders and sectors per track (SPT) reported by the BIOS. The values you may get by querying the BIOS may differ depending on the size and may vary from computer to computer and the CHS translation scheme being used by the BIOS.

If you have a BIOS that reports a drive as having 16 heads and 63 SPT then a CHS(0, 1, 1) should be the 64th sector on the drive. If however the BIOS reports 16 heads and 36 SPT then the 64th sector is CHS(0, 1, 28). If using a hard drive with CHS addressing always query the BIOS for the number of heads and SPT and compute logical block addresses (LBA) when your bootloader runs. It is highly recommended to not hard code the number of cylinders, number of heads, and SPT value into a bootloader.

Rather than use 0x80 for a drive number, use the value in DL that the BIOS passes to your bootloader. Use that value rather than hard coding the boot drive number. I have some General Bootloader Tips that covers that and other things you may wish to consider in doing legacy bootloader development.

Cylinder, Head, Sector (CHS) addressing came about from media that used magnetic media on round platters (or floppy disk). Wikipedia has a good article on the subject of CHS. A diagram depicting CHS in a physical sense: 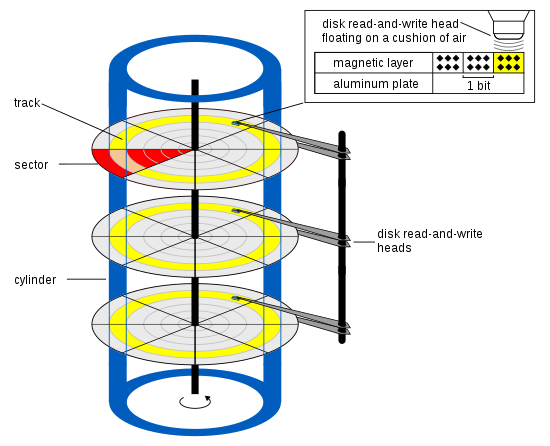 After time the concept of cylinders, sectors, and heads no longer matched the physical implementation however CHS addressing was still used to access data on a device for compatibility. Logical Block Addressing (LBA) eventually obsoleted CHS and is the preferred method on media that appears as a hard drive to the BIOS. CHS addressing is still used on devices that present themselves as floppy disk media to the BIOS. LBA access to floppy media is not supported by all BIOSes, and CHS addressing is still the preferred mechanism in that case.

Your previous question and comments are intent on using CHS addressing on a hard drive. As I previously mentioned it is preferred with hard drives to use Int 13h/AH=42H to avoid using CHS at all and using LBA instead. A logical block address starts at 0 and goes up to the total sector count on the drive minus 1. Dealing with an LBA is much easier.

You can convert an LBA using a formula I have previously described in a related answer:

You can do the calculation in the reverse direction (CHS to LBA) using:

In order to compute CHS for a given LBA on the disk you need to know the Sectors Per Track (SPT) and the number of heads. Int 13h/AH=8h can be used to retrieve these values from the BIOS at runtime in the bootloader. In a related answer I provide example code that uses Int 13h/AH=8h to get SPT and Heads and computes CHS from a 32-bit LBA and then use those values to read a sector with Int 13h/AH=2h

This program can be convenient if you want to compute CHS from an LBA. In your case you want to know the CHS values for the 64th sector on the disk. LBA's are 0 based so that is LBA 64-1=63. In your comments/chat the BIOS is reporting SPT=36 and Heads=16. If you compile and run the program above with:

The result should be:

For a drive that the BIOS reports with SPT 63 and 16 heads the results should look like this for LBA 63:

Not the answer you're looking for? Browse other questions tagged assembly x86 x86-16 bootloader osdev or ask your own question.

17
Boot loader doesn't jump to kernel code
5
Why isn't my root directory being loaded? (FAT12)
2
Is INT13H (non extended) capable of accessing drives with more than 16 heads per cylinder?
1
Why is my floppy disk reading code failing?