Flutter signature invalid when tried on an iOS device

I am trying to run a new Flutter app (the sample app created by flutter create) on an iOS device (an iPhone XS). Xcode manages to install it, but then it crashes with this message:

If I try flutter run, the app also opens and crashes. And the command keeps waiting forever:

In Xcode I configured a Team (Personal Team) and the Signing Certificate (Apple Development certificate) seems fine because I can install a Hello world Swift project on my device.

Note: I'm not paying an account of Apple Developer Program. Is that absolutely necessary to run Flutter apps on iOS devices?

I have followed the macOS instructions and flutter doctor says I have everything I need for iOS:

In the iOS simulator the app works fine too.

Recently I noticed that I don't have the file ios/Podfile. I found this post talking about that. I don't know whether this is important or not in my case, but I tried to manually add this Podfile. Anyway, I get the same signature error.

Frustrated by this, I switched to NativeScript for now.

This is an iOS 13.3.1 regression unrelated to Flutter. I was able to reproduce the crash without any Flutter or CocoaPods code by creating a new Xcode project, adding a framework target, and choosing a Personal Team provisioning profile.

The bug should not impact Developer Account team provisioning profiles or apps that are already signed and distributed on the App Store.

Unfortunately the only workaround may be to avoid upgrading development devices to 13.3.1 until this is resolved.

If this doesn't work, go to the ios folder in your flutter project and open Runner.xcworkspace by double-tapping on it. It should look like this: 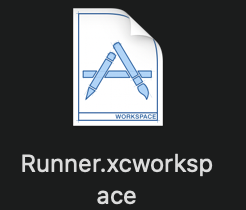 When xcode opens, click on Runner on the top left.

Then go to Signing and Capabilities and under the "Team" dropdown, select a field. If none exists, create an account.

Press the play button on top left to run the app on selected device.

All I want is to provide more details to OP and other members here. So I have everything as OP stated.

This is what I have tried:

So these steps produce: this error on Simulator. Same signature errors as without Pod on physical device

Again. I am sorry if I did something wrong posting this but I didn't want to duplicate this issue or suggest OP an edit as this post is pretty long.

Try to switch to stable channel via flutter channel stable, execute flutter upgrade and then navigate to app project and run flutter run

Just to run the app in Debug mode, doesn't need any apple paid account. 1) Open the xCode for that project and select the device and run in it.

Open the XCode of that project and check Build Settings as there is FLUTTER_ROOT path is correct, if not there create the flutter root and give the path.

Open up the Xcode and click on Product -> Clean or (CMD-Shift-K). If that did not work try following this: https://macpaw.com/how-to/clear-xcode-cache

If that also not working, please let me know.

Did you check this link which might give you the desired output https://github.com/flutter/flutter/issues/16507. let me know if it works may be its a signing issue, this post will give you the idea whats going wrong. Thanks

Ok, having a moment to create answer:

Basing on Subaharan Vel answer, question: Flutter Podfile and Pods folders not created in ios directory and answer suggesting that building for iOS simulator can create podfile in incorrect place (it should be created automatically directly in iOS directory. So it seems likely that your Podfile exists somewhere there. Try to find it or just remove whole ios directory, clean the project and recreate it. Also make sure that this is not the case Creating a Podfile to add iOS pods before adding any Flutter plugins never hooks up the plugin pods in the existing Podfile.

Good luck, I hope it will help you

Not an ideal solution but the following worked for me.

Although, you won't be able see anything on the debug window since the process terminates after throwing the error. It's not an ideal solution but definitely a workaround until we get the next Xcode update.

Not the answer you're looking for? Browse other questions tagged ios flutter or ask your own question.

19
Flutter Podfile and Pods folders not created in ios directory
3
dyld: Library not loaded: @rpath/App.framework/App
0
Where is podfile in flutter for phone firebase auth?