How to remove spaces from a string using JavaScript?

How to remove spaces in a string? For instance:

javascript text
Share
Improve this question
edited May 19 '19 at 3:40

Update: Based on this question, this:

is a better solution. It produces the same result, but it does it faster.

\s is the regex for "whitespace", and g is the "global" flag, meaning match ALL \s (whitespaces).

A great explanation for + can be found here.

As a side note, you could replace the content between the single quotes to anything you want, so you can replace whitespace with any other string.

Two ways of doing this! 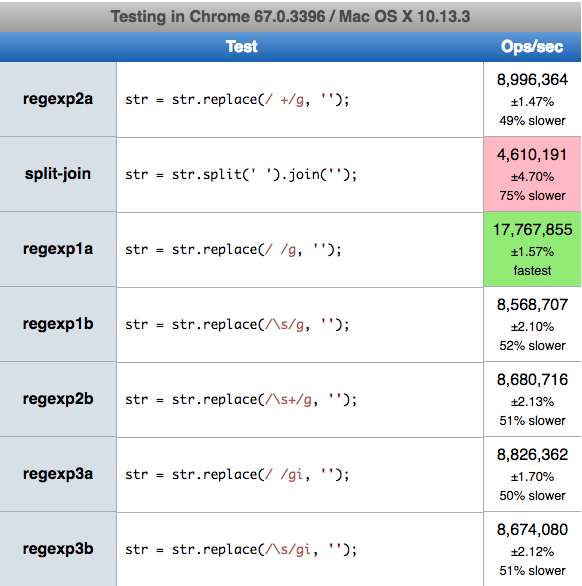 The fastest solution on all browsers is / /g (regexp1a) - Chrome 17.7M (operation/sec), Safari 10.1M, Firefox 8.8M. The slowest for all browsers was split-join solution. Change to \s or add + or i to regexp slows down processing.

For string about ~3 milion character results are:

You can run it on your machine: https://jsperf.com/remove-string-spaces/1

On small texts this is not relevant, but for cases when time is important, e.g. in text analisers, especially when interacting with users, that is important.

On the other hand, \s+ handles wider variety of space characters. Among with \n and \t, it also matches \u00a0 character, and that is what &nbsp; is turned in, when getting text using textDomNode.nodeValue.

So I think that conclusion in here can be made as follows: if you only need to replace spaces ' ', use split/join. If there can be different symbols of symbol class - use replace(/\s+/g, '')

Note: Though you use 'g' or 'gi' for removing spaces both behaves the same.

If we use 'g' in the replace function, it will check for the exact match. but if we use 'gi', it ignores the case sensitivity.

Although regex can be slower, in many use cases the developer is only manipulating a few strings at once so considering speed is irrelevant. Even though / / is faster than /\s/, having the '\s' explains what is going on to another developer perhaps more clearly.

Not the answer you're looking for? Browse other questions tagged javascript text or ask your own question.

1
Why isnt this string parsing function working?
-1
remove spaces between word in a sentence (Not a single input word)
-7
How to remove spaces using JavaScript?
92
Is there a difference between /\s/g and /\s+/g?
2
How to make a field that recognizes letters and numbers with Javascript?
-3
Remove space between words in string javascript js React
2
can't delete custom todo list item from todo list
1
JQuery Remove Text Before String
-1
Concatenate String with 'e' Jquery
0
How to remove spaces from an array?
See more linked questions