Python docs have misleading explanation of return in finally

In the doc it says

It also provides this example below:

Now looking at this example the above statement seems straight and fair enough, but if you modify that example a bit to make it look like this:

Now, if you run this you will see that foo will be printed and False will be returned. Now the doc says that finally clause's return will execute before, and instead of, try clause's return statement. If so, then why I can see the foo being printed?

1) Why does doc say finally clause's return statement is executed before?

I believe both the statements are the opposite of what happens in reality.

After reading @iBug's answer it is clear now that how the print("foo") is evaluated but None is not returned. Basically, the expression is evaluated first and then return happens. Later on return False in finally is executed. Which makes clear why we get the output that we did.

Still, I see that the return False in finally is executed after the return print("foo") of try.

Or as per @iBug's comment, 10 RETURN_VALUE is completely bypassed? 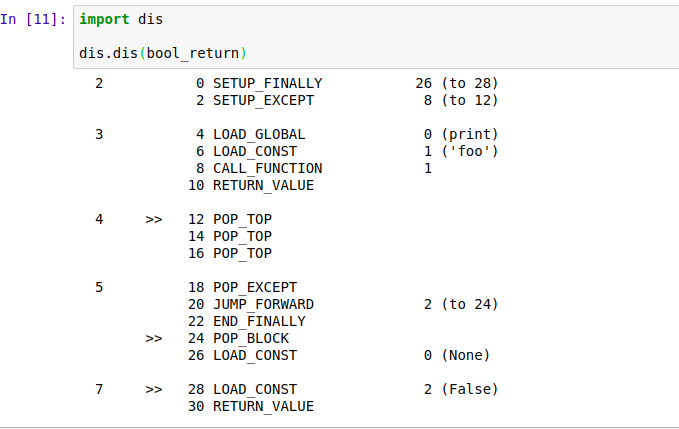 This is now resolved in the documentation and it is correct now on what will be returned. However, if you wish to know "how" then read all the comments and answer carefully.

As you can see above, return False does happen before the return statement in the try block, but after the to-be-returned value has been computed.

I think the docs probably meant "the very action of returning" by return statement, or in other words, it didn't take into account the computation of the return value, which of course happens before it's returned.

To observe whether 8 RETURN_VALUE is executed or not, you can compile CPython interpreter in debug mode and run it in GDB. A step-by-step guide would be too bloated for this answer, so I'll give an outline here (Linux).

Now that it's clear that only one return has been executed in the function, it must be 12 RETURN_VALUE, so the Python instruction 8 RETURN_VALUE isn't executed at all.

Not the answer you're looking for? Browse other questions tagged python python-3.x try-except finally or ask your own question.

7426
Does Python have a ternary conditional operator?
3175
"Least Astonishment" and the Mutable Default Argument
3588
Does Python have a string 'contains' substring method?
1174
How to return dictionary keys as a list in Python?
25
try-catch-finally with return after it
171
Does 'finally' always execute in Python?
1
finally block execute before the break,continue,return statement of try clause in python
22
Finally always runs just before the return in try block, then why update in finally block not affect value of variable returned by try block?