Edit the question to include desired behavior, a specific problem or error, and the shortest code necessary to reproduce the problem. This will help others answer the question.

I am being very late to the google foobar party. I am stuck at level 2, and only the last test case is pending. But I am completely clueless of what this question is expecting in this last test case.

I googled the question and looks like they've updated the test case and the constraint of lambs < 10 has been removed.

Being a henchman isn't all drudgery. Occasionally, when Commander Lambda is feeling generous, she'll hand out Lucky LAMBs (Lambda's All-purpose Money Bucks). Henchmen can use Lucky LAMBs to buy things like a second pair of socks, a pillow for their bunks, or even a third daily meal!

However, actually passing out LAMBs isn't easy. Each henchman squad has a strict seniority ranking which must be respected - or else the henchmen will revolt and you'll all get demoted back to minions again!

There are 4 key rules which you must follow in order to avoid a revolt: 1. The most junior henchman (with the least seniority) gets exactly 1 LAMB. (There will always be at least 1 henchman on a team.) 2. A henchman will revolt if the person who ranks immediately above them gets more than double the number of LAMBs they do. 3. A henchman will revolt if the amount of LAMBs given to their next two subordinates combined is more than the number of LAMBs they get. (Note that the two most junior henchmen won't have two subordinates, so this rule doesn't apply to them. The 2nd most junior henchman would require at least as many LAMBs as the most junior henchman.) 4. You can always find more henchmen to pay - the Commander has plenty of employees. If there are enough LAMBs left over such that another henchman could be added as the most senior while obeying the other rules, you must always add and pay that henchman.

Note that you may not be able to hand out all the LAMBs. A single LAMB cannot be subdivided. That is, all henchmen must get a positive integer number of LAMBs.

Write a function called solution(total_lambs), where total_lambs is the integer number of LAMBs in the handout you are trying to divide. It should return an integer which represents the difference between the minimum and maximum number of henchmen who can share the LAMBs (that is, being as generous as possible to those you pay and as stingy as possible, respectively) while still obeying all of the above rules to avoid a revolt. For instance, if you had 10 LAMBs and were as generous as possible, you could only pay 3 henchmen (1, 2, and 4 LAMBs, in order of ascending seniority), whereas if you were as stingy as possible, you could pay 4 henchmen (1, 1, 2, and 3 LAMBs). Therefore, solution(10) should return 4-3 = 1.

To keep things interesting, Commander Lambda varies the sizes of the Lucky LAMB payouts. You can expect total_lambs to always be a positive integer less than 1 billion (10 ^ 9). 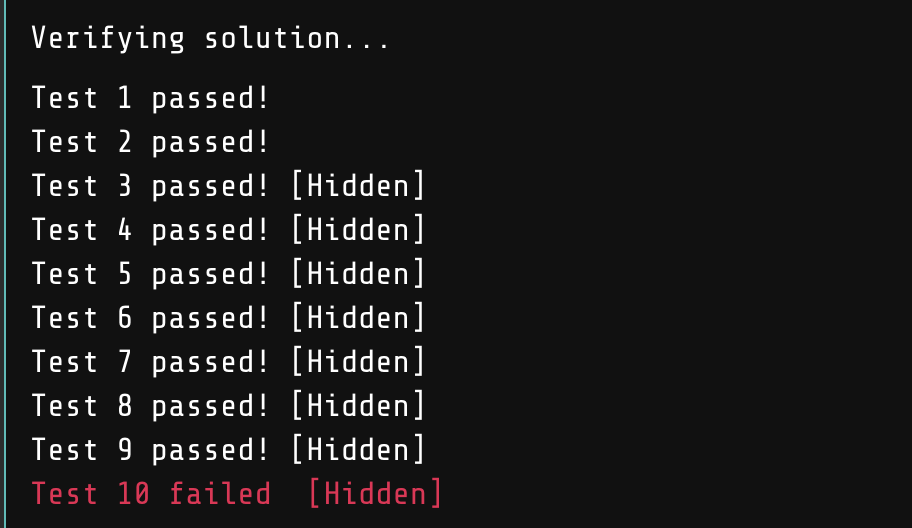 I haven't tested my code for Time limit exceeds. Is it possible that the error message for TLE is also FAILED ?

I have stuck on this problem too, I tried to solve this problem and got success on this. I am providing my code here which passed all test cases tested by myself. I am sure it will help.

Python solution this may work (untested):

Foobar has a max amount of lines of code that you can use but as far as im aware (not 100% sure) but i think you dont have a maximum time limit to run your code. Look at the constraints.txt file - that should be more accurate.