Shouldn't hoisting of const andlet be done in global, function, eval code units?
(It seems that hoisting doesn't seem to happen, but this is purely thanks to the help of TDZ. Internally both const and let hoisting.)

If engine meet block {/* code */} (rather than function) while creating Execution Context, are engine adding a new scope for the block to [[Scope]]?

When a block is first encountered (with the {), a new execution context is created, which creates a new empty Lexical Environment (which is basically a container mapping variable names in the current immediate scope to their values). The engine then iterates through all variables declared with const or let in the immediate block are initialized. (But, despite being initialized, they aren't referenceable until the engine actually comes across the const <variableName> or let <variableName> line - the TDZ)

So, plain blocks do create a new scope, which will get populated if any statements immediately inside that block declare a variable with const or let.

You can see this in action with a debugger: 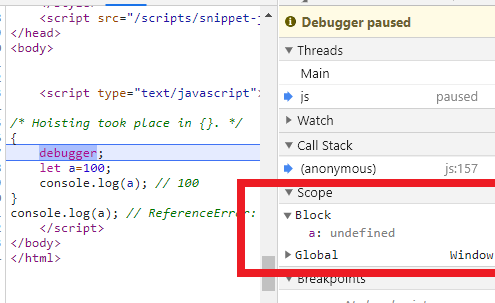 (though, that's a bit misleading - a doesn't actually contain undefined, it hasn't been fully created at that point)

The const and let variable names are hoisted in that the interpreter recognizes from the start of the block that it'll be illegal to reference them until they get fully created via the const or let line.

It's not just plain blocks - any level of code will result in the same sort of thing happening (like at the top level, or inside a for block, or inside a function).

Not the answer you're looking for? Browse other questions tagged javascript executioncontext or ask your own question.

4409
What's the difference between using “let” and “var”?
371
Explain the encapsulated anonymous function syntax
2
Eval bug in Rhino inside a try/catch
53
Indirect eval call in strict mode
2
Javascript: why do callback functions with global execution context have access to scoped variables?
1
Need a simple explanation of javascript execution context
0
Does hoisting takes place at once for the full code or by nested-function-levels
0
ECMAScript: Where can we find specification about accessibility of let/const variables
0
JavaScript Global Execution Context