How can you find and replace text in a file using the Windows command-line environment?

I am writing a batch file script using Windows command-line environment and want to change each occurrence of some text in a file (ex. "FOO") with another (ex. "BAR"). What is the simplest way to do that? Any built in functions?

A lot of the answers here helped point me in the right direction, however none were suitable for me, so I am posting my solution.

I have Windows 7, which comes with PowerShell built-in. Here is the script I used to find/replace all instances of text in a file:

Powershell.exe should be part of your PATH statement already, but if not you can add it. The location of it on my machine is C:\WINDOWS\system32\WindowsPowerShell\v1.0

If you are on Windows version that supports .Net 2.0, I would replace your shell. PowerShell gives you the full power of .Net from the command line. There are many commandlets built in as well. The example below will solve your question. I'm using the full names of the commands, there are shorter aliases, but this gives you something to Google for.

The setup files are on SourceForge.

will preview the replacements to do recursively in the files of this Perl distribution.

As noted by Joe Jobs in the comments (Dec. 2020), if you want to replace &A for instance, you would need to use quotes in order to make sure & is not interpreted by the shell:

To use this revised script (which we’ll call replace.vbs) just type a command similar to this from the command prompt:

BatchSubstitute.bat on dostips.com is an example of search and replace using a pure batch file.

It uses a combination of FOR, FIND and CALL SET.

Lines containing characters among "&<>]|^ may be treated incorrectly.

Note - Be sure to see the update at the end of this answer for a link to the superior JREPL.BAT that supersedes REPL.BAT
JREPL.BAT 7.0 and above natively supports unicode (UTF-16LE) via the /UTF option, as well as any other character set, including UTF-8, via ADO!!!!

I have written a small hybrid JScript/batch utility called REPL.BAT that is very convenient for modifying ASCII (or extended ASCII) files via the command line or a batch file. The purely native script does not require installation of any 3rd party executeable, and it works on any modern Windows version from XP onward. It is also very fast, especially when compared to pure batch solutions.

Here is a trivial example of how to replace foo with bar in test.txt, assuming REPL.BAT is in your current folder, or better yet, somewhere within your PATH:

The JScript regex capabilities make it very powerful, especially the ability of the replacement text to reference captured substrings from the search text.

I've included a number of options in the utility that make it quite powerful. For example, combining the M and X options enable modification of binary files! The M Multi-line option allows searches across multiple lines. The X eXtended substitution pattern option provides escape sequences that enable inclusion of any binary value in the replacement text.

The entire utility could have been written as pure JScript, but the hybrid batch file eliminates the need to explicitly specify CSCRIPT every time you want to use the utility.

Here is the REPL.BAT script. Full documentation is embedded within the script.

I have ceased development of REPL.BAT, and replaced it with JREPL.BAT. This newer utility has all the same functionality of REPL.BAT, plus much more:

As always, full documentation is embedded within the script.

The original trivial solution is now even simpler:

The current version of JREPL.BAT is available at DosTips. Read all of the subsequent posts in the thread to see examples of usage and a history of the development.

Use the fnr utility. It's got some advantages over fart:

I don't think there's a way to do it with any built-in commands. I would suggest you download something like Gnuwin32 or UnxUtils and use the sed command (or download only sed):

I know I am late to the party..

We also, use the Dedupe Function extensively to help us deliver approximately 500 e-mails daily via SMTP from: - https://groups.google.com/forum/#!topic/alt.msdos.batch.nt/sj8IUhMOq6o

and these both work natively with no extra tools or utilities needed.

DEDUPLICATOR (note the use of -9 for an ABA number):

When you work with Git on Windows then simply fire up git-bash and use sed. Or, when using Windows 10, start "Bash on Ubuntu on Windows" (from the Linux subsystem) and use sed.

Its a stream editor, but can edit files directly by using the following command:

If you want to replace a string in versioned files only of a Git repository, you may want to use:

I played around with some of the existing answers here and prefer my improved solution...

or if you want to save the output again to a file...

The benefit of this is that you can pipe in output from any program. Will look into using regular expressions with this too. Couldn't work out how to make it into a BAT file for easier use though... :-(

I have used perl, and that works marvelously.

.orig is the extension it would append to the original file

For a number of files matching such as *.html

1) With e? option that will evaluate special character sequences like \n\r and unicode sequences. In this case will replace quoted "Foo" and "Bar":

2) Straightforward replacing where the Foo and Bar are not quoted.

Here's a solution that I found worked on Win XP. In my running batch file, I included the following:

The replace.bat file is as below. I did not find a way to include that function within the same batch file, because the %%a variable always seems to give the last value in the for loop.

Take a look at Is there any sed like utility for cmd.exe which asked for a sed equivalent under Windows, should apply to this question as well. Executive summary:

They are both robust and very swift with large files compared to plain batch scripting, and also simpler to use for basic replacing of text. They both have Windows regular expression pattern matching.

Both become powerful system-wide utilities when placed in a folder that is on the path, or can be used in the same folder with a batch file, or from the cmd prompt.

They both have case-insensitive switches and also many other functions.

May be a little bit late, but I am frequently looking for similar stuff, since I don't want to get through the pain of getting software approved.

However, you usually use the FOR statement in various forms. Someone created a useful batch file that does a search and replace. Have a look here. It is important to understand the limitations of the batch file provided. For this reason I don't copy the source code in this answer.

I'm prefer to use sed from GNU utilities for Win32, the followings need to be noted

Just faced a similar problem - "Search and replace text within files", but with the exception that for both filenames and search/repalce I need to use regex. Because I'm not familiar with Powershell and want to save my searches for later use I need something more "user friendly" (preferable if it has GUI).

That little program has nice GUI and support regex for searching in filenames and within files. Only disadventage is that if you want to save your settings you have to run the program as an administrator (at least on Win7).

Use powershell in .bat - for Windows 7+

This is one thing that batch scripting just does not do well.

The script morechilli linked to will work for some files, but unfortunately it will choke on ones which contain characters such as pipes and ampersands.

VBScript is a better built-in tool for this task. See this article for an example: http://www.microsoft.com/technet/scriptcenter/resources/qanda/feb05/hey0208.mspx

@Rachel gave an excellent answer but here is a variation of it to read content to a powershell $data variable. You may then easily manipulate content multiple times before writing to a output file. Also see how multi-line values are given in a .bat batch files.

Download Cygwin (free) and use unix-like commands at the Windows command line.

Can also see the Replace and ReplaceFilter tools at https://zoomicon.github.io/tranXform/ (source included). The 2nd one is a filter.

Copying another file into the original one file

removing another one file

Notepad++ does this ALL for you with the "Find in files" command. 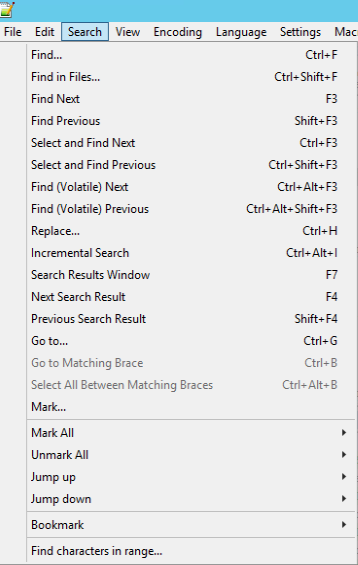 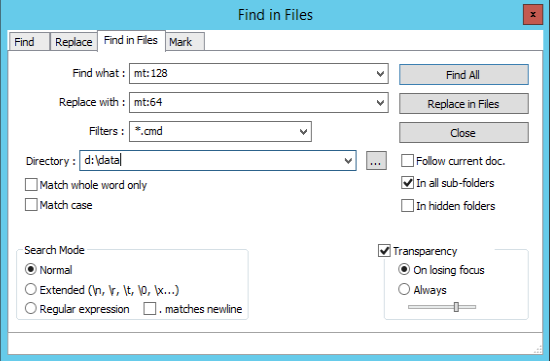 I have faced this problem several times while coding under Visual C++. If you have it, you can use Visual studio Find and Replace Utility. It allows you to select a folder and replace the contents of any file in that folder with any other text you want.

Under Visual Studio: Edit -> Find and Replace In the opened dialog, select your folder and fill in "Find What" and "Replace With" boxes. Hope this will be helpful.

NadjibNadjib
27
3
Add a comment  |
Highly active question. Earn 10 reputation (not counting the association bonus) in order to answer this question. The reputation requirement helps protect this question from spam and non-answer activity.

Not the answer you're looking for? Browse other questions tagged windows command-line scripting batch-file text-files or ask your own question.