How to run/debug a streamlit application from an IDE

I really like streamlit as an environment for research. Mixing a notebook/dashboard-like output I can design quickly with pure code for its definition (no cells etc.) as well as the ability to influence my code through widgets while it runs is a game changer.

For this purpose, I was looking for a way to run or even debug a streamlit application, since the tutorials only show it being started via the commandline:

Is there a way to do either running or debugging from an IDE? 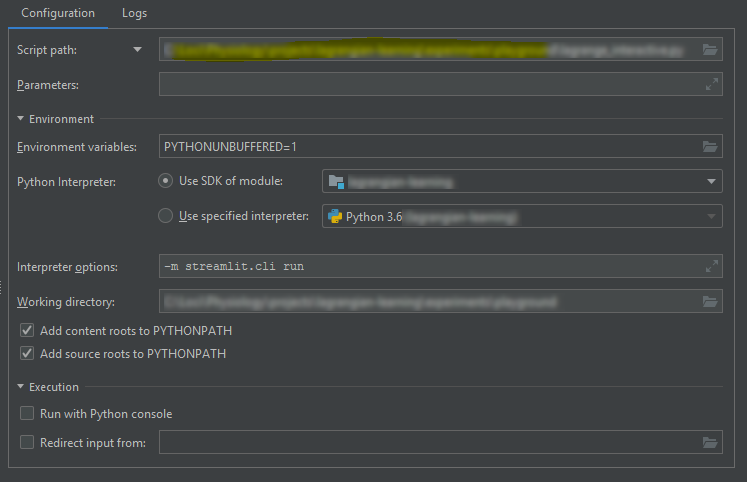 Unfortunately, debugging that way does not seem to work since the parameters appended by PyCharm are passed to streamlit instead of the pydev debugger.

Edit: Just found a way to debug your own scripts. Instead of debugging your script, you debug the streamlit.cli module which runs your script. To do so, you need to change from Script path: to Module name: in the top-most field (there is a slightly hidden dropdown box there...). Then you can insert streamlit.cli into the field. As the parameters, you now add run code.py into the Parameters: field of the Run/Debug Configuration. 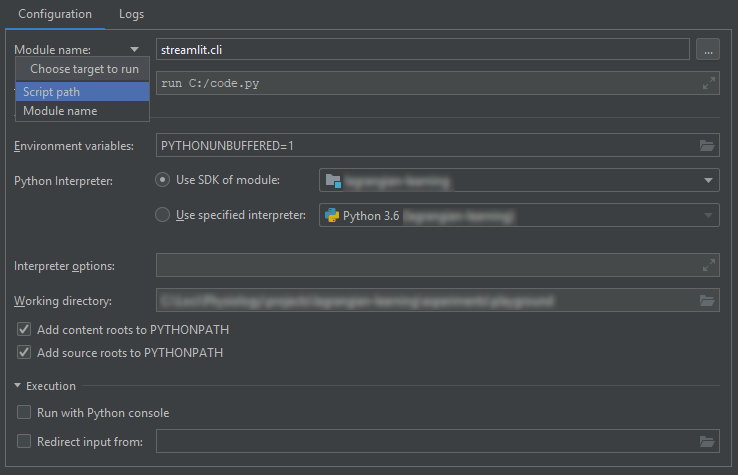 If you're a VS Code user, you can debug your Streamlit app by adding the following configuration to your launch.json file:

Specifying the port number allows you to launch the app on a fixed port number each time you run your debug script.

Once you've updated your launch.json file, you need to navigate to the Run tab on the left gutter of the VS code app and tell it which Python config it should use to debug the app:

Thanks to git-steb for pointing me to the solution!

I've come up with an alternative solution which allows you to use PyCharm debugging in a natural way. Simply set up a run script (which I call run.py which looks like this:

and set that up as a normal Python run configuration in PyCharm.

With some modification to @aiwa answer - This worked for me in the VS code version - 1.58

Cannot comment so I have to put this as an answer.

An addition to @Ben's answer (module debugging part): if your script needs to be run with some args you can easily add them as

Not the answer you're looking for? Browse other questions tagged debugging intellij-idea pycharm ide streamlit or ask your own question.

477
How do I print debug messages in the Google Chrome JavaScript Console?
632
How to build jars from IntelliJ properly?
1678
How do I debug Node.js applications?
755
What is a stack trace, and how can I use it to debug my application errors?
1242
Run/install/debug Android applications over Wi-Fi?
741
How to set a JavaScript breakpoint from code in Chrome?
3
Which Windows IDE to write, execute and debug single-file C# programs?
630
How can I remove the Flutter debug banner?