Why is R reading only the first nine files

I'm reading multiple .xls from a folder "test_dir" with this code

each time, only the first 9 dataset are read into r i.e Book1-Book9, do anyone know the reason why ? see the structure of my folder in the image below 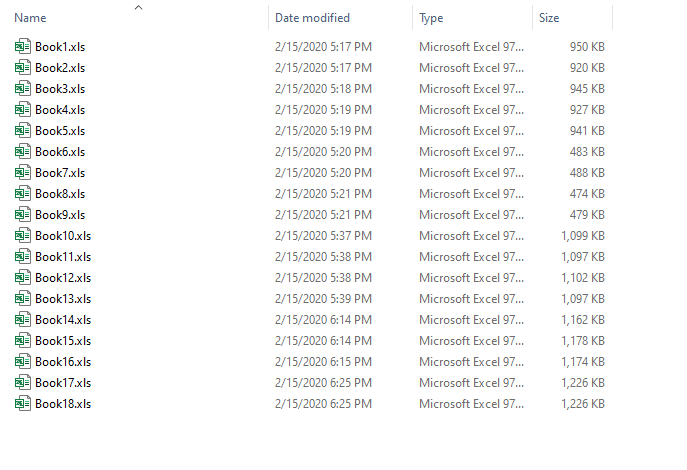 There's a lot of comments here. I'll try to synthesize them into one clear answer. The original poster (OP) is trying into read multiple Excel workbooks into R using the read_excel function from the excellent R package called readxl. OP says only the first 9 workbooks could be imported. After providing the files via DropBox, r2evans could only import workbooks 1, 9 and 10 while I could only import workbooks 1 and 9. On further interrogation, OP said that the files were "generated from a software".

I am quite certain that therein lies the problem. The Excel files were generated by software, presumably not by Excel. The OP didn't say what software generated the files. The fact that they said "software", and not Excel, would imply that Excel did not create the files.

I also believe that workbooks 1 and 9 were opened by the OP and then saved and then zipped along with the others. In fact, saving the files after opening them in Excel is not really necessary as Excel does a silent save for you even if the file is closed without saving. In any case, opening the file and then closing it (with or without saving) causes the file to be magically "importable" into R using readxl. I don't know why, but can only assume that allowing software (presumably not Excel) to create an Excel file is the cause of the problem. Note, there is no error nor is there any warning. The data is just empty (no rows, see below for an attempt to import "Book11.xls"). I don't have any answer except to open each file one by one and then close them (with or without saving).

Edit: Note that "Book11.xls" does actually contain data. The read_excel function successfully reads the file (no error), but unsuccessfully imports the data (again, no error). That is strange to me. All other files, except Book1.xls and Book9.xls give the same results. That is, an empty tibble. All files are not empty. They contain many rows and columns. See below...

"Book1.xls" was probably opened by the OP (or someone else) and is able to be imported:

I also tried using the XLConnect package and the results were the same. (Edit: I tell a lie. The results are not the same. This package gives an error while trying to import the file. Unlike the readxl package, which gives NO ERROR but fails to import the data.)

So, whether this is a bug in those two packages is debatable. I'd say not. The fact that a warning message appears when you try to open the files in Excel suggests that it's more likely a problem with the software that generated the files.

Not the answer you're looking for? Browse other questions tagged r regex readxl or ask your own question.

464
Regex: matching up to the first occurrence of a character
344
split string only on first instance of specified character
4
Error when using readxl: 'exdir' does not exist
9
Include pattern in list.dirs
2
copy csv file from multiple directories to a new one in R
0
Reading multiple excel files into R using the map function
0
R: right input directory loads empty input.files and count.table
0
How to get the path from input$.. or output$.. and use it to list.files and then copy/cut the files
0
R - Use Glob Pattern to Extract text files from multiple directories