When using the K-Means Clustering Algorithm, is it possible to have a set of data which results in an Infinite Loop?

This Question is more Theoretical, and not specifically trying to problem-solve.

I recently was introduced to the K-Means Clustering algorithm, and unsupervised machine learning algorithm, and I was intrigued by the though that one some sets of data, even if completely random, the average centroids drawn could keep changing through each iteration. 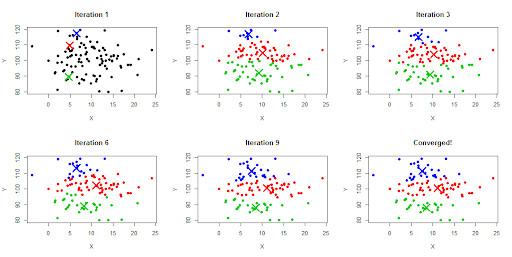 What I am trying to show here, is, imagine if the program flipped between iteration 6, to iteration 9, and kept doing this forever.

I have had my code randomly hang before using K-Means, so I don't believe this is impossible, but please let me know if this is a known occurrence, or if it is impossible due to the nature of the algorithm.

If you need more information just ask me in a comment. Using Python 3.7

tl;dr No, a K-means algorithm always has an end point if the algorithm is coded correctly.

The ideal way to think about this is not in the sense of what datapoints would cause issues, but rather about how kmeans is working in the broader sense of things. The k-means algorithm is always working in a finite space. For N data points, there are only N ^ k distinct arrangements for the data points. (This number can be pretty large, but is still finite)

Secondly, a k-means algorithm is always optimizing a loss function, based on the sum of squared distances between each data point and it's assigned cluster center. This means two very important things: Each of the N ^ k distinct arrangements can be arranged in an ascending/descending order of minimum loss to maximum loss. Also, the K-means algorithm will never go from a state of lower net loss to a higher net loss.

These two conditions guarantee that the algorithm will always tend towards the minimum loss arrangement in a finite space, thus ensuring that it has an end.

The last edge case: What if more than one minimum state has equal loss? This is a highly unlikely scenario, but can cause issues if and only if the algorithm is coded poorly for tie breakers. Essentially, the only way this can cause a cycle is if a data point has equal distance for two clusters, and is allowed to change clusters away from it's current cluster even on equal distance. Suffice to say, the algorithms are generally coded so that the data points never swap on a tie, or in some other deterministic manner, thus avoiding this scenario entirely.

Not the answer you're looking for? Browse other questions tagged python algorithm machine-learning k-means centroid or ask your own question.

7
Can k-means fall into an infinite loop ?

149
How do I determine k when using k-means clustering?
213
Is it possible to specify your own distance function using scikit-learn K-Means Clustering?
0
Finding the furthest distant centroids to cluster using kmeans
0
Logic error: Incorrect computation of mean centroid ,Infinite Execution of , 'entries ' function - K means clustering for a set of points, in C++
2
What does minimising the loss function mean in k-means clustering?
1
Retrieve 100 samples closest to the centroids of each cluster after K means clustering using R
2
How does K-Means work when initial centroid locations far away from the data are selected?