I use the new Command line tools of android because the old sdk-tools repository of android isn't available anymore. So I changed my gitlab-ci to load the commandlintools. But when I try to run it I get the following error:

I already tried executing those commandy by hand, but I get the same error. Also if i run sdkmanager --version, the same error occurs. My gitlab-ci looks like:

Instead of passing the argument --sdk_root for each single command execution, let's deep dive into the real cause.

Starting from Android SDK Command-line Tools 1.0.0 (6200805), in contrast to Android SDK 26.1.1 (4333796), the tools directory hierarchy has been changed. Previously it was placed right inside ANDROID_HOME (which is deprecated, we will use the term ANDROID_SDK_ROOT for the rest of the paragraph), now it's still named as tools (the only thing you'll get after unpacking the downloaded commandlinetools zip file), but differently, you have to place it inside a directory called cmdline-tools on your own. The name cmdline-tools comes from its package name, where you can get from listing packages command sdkmanager --list, whose outputs include cmdline-tools;1.0 | 1.0 | Android SDK Command-line Tools.

Well, that's all you have to change. Let me explain more.

Let me recap in a simple way:

The behavior has changed again since the build 6858069 (Android SDK Command-line Tools 3.0):

This appears to be a bug with the way sdkmanager locates the SDK installation folder.

A work-around is to set the flag --sdk_root. You can move ANDROID_HOME declaration higher, then use it with the subsequent commands.

Oddly enough if you run sdkmanager --sdk_root=${ANDROID_HOME} "tools" it will upgrade tools from 3.6.0 to 26.1.1 and sdkmanager no longer has this issue. This update takes time and bandwidth and isn't exactly necessary with the work-around.

For those who struggled with installing Android Command Line Tools for Appium on Windows 10/x64 just do as following:

The sdkmanager tries to figure out the android-sdk path based in where it's unpacked, without use the environment variables, like ANDROID_SDK_ROOT. But it's get worse, because it have a hard coded parent folder named cmdline-tools and if you unzip commandlinetools inside a folder with another name, it doesn't work, forcing us to use the parameter sdk_root to feed the inside variable correctly.

So, with that in mind we can use the following approach to solve this.

I will assume that we are using Ubuntu OS, so if you aren't, you should adapt some of that instructions.

You should see the version printed in your terminal.

Downloading the new cmdline-tools from Android Developer website requires the following directory structure to be respected. 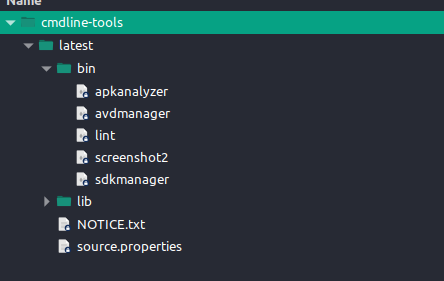 Mixing responses from Jing Li and caller9, this is my script:

Got the same issue, came here by Google. According to the AndroidStudio Archive, today was the release of 4.1. I suppose that's no coincidence.

This completely unrelated guide has a hardlink for an older version of the sdk-tools for linux. You can change the url to windows or mac for other OSs. I'll use that as a hotfix for now.

(that was supposed to be a comment not a solution)

I found the solution to use the latest command-line tools following those steps:

1 - Extracting the Command-line tools into a folder with this structure: e.g.: $HOME/Development/android/cmdline-tools/latest (this folder must contain lib, bin, notice.txt and source.properties)

2 - Defining ANDROID_HOME as an environment variable:

One may encounter another issue - Stuck at ".android/repositories.cfg could not be loaded."

To sum up the following recipe for development with Qt can be composed:

I got the same error. After doing all solutions, i could not fix it. I solved this problem by reading :https://forum.unity.com/threads/android-build-not-working.844969/

(Note: Adding --sdk_root=%ANDROID_HOME% at the end

This happened to me when downloading the standalone command line tools (commandlinetools-mac-6200805_latest) on a new Mac.

Based on all the answers here, I was able to make it work like this

The docs for the --sdk_root option say "Use the specified SDK root instead of the SDK containing this tool". This made me think that, despite being shipped standalone, the tool expects to be part of a bundle where the SDK is installed aswell.

Therefore to solve this problem in Windows (same can be replicated in other OS), do the following:

Similarly, place your Android SDK Platform Tools inside your android_sdk/platform-tools/ and add corresponding PATH to ENVIRONMENTAL VARIABLES under System Variables

This page from Unity 2018 documentation also has a good explanation of resolving this issue, including such points like:

answer by jing-li works for me Instead of passing the argument --sdk_root for each single command execution, let's deep dive into the real cause.

Starting from Android SDK Command-line Tools 1.0.0 (6200805), in contrast to Android SDK 26.1.1 (4333796), the tools directory hierarchy has been changed. Previously it was placed right inside ANDROID_HOME, now it's still named as tools (the only thing you'll get after unpacking the downloaded commandlinetools zip file), but differently, you have to place it inside a directory called cmdline-tools on your own. The name cmdline-tools comes from its package name, where you can get from listing packages command sdkmanager --list, whose outputs include cmdline-tools;1.0 | 1.0 | Android SDK Command-line Tools.

Summarizing several useful posts here, and for people wanting a quick snippet, for example to plug in a Dockerfile, the following script is working for me:

It just requires bsdtar to be installed (it's usually packaged in popular distributions). Android platform/build tools version 29 are installed, and Android sdk root will be then located in /opt/android. While this setup works for me without warnings as it is, I have an issue when reinstalling packages already installed, or possibly installing different version of the packages: it clashes with packages already present and create bogus directories in the sdk root, with -2, -3 suffixes. These directories are then ignored, and warnings like Observed package id 'emulator' in inconsistent location are printed, so this behavior is definitely not desirable. If you have a fix for that please write it in the comments or, if you are confident enough, just edit the script with the exact fix.

The first requirement of installing SDK (Any method) is to install Java & setting JAVA_HOME path.

Then, SDK command-line tools need installation path without which it throws NullPointerException.
To overcome this just pass the path where you want to install SDK with argument "--sdk_root"
Eg. sdkmanager.bat "platform-tools" "platforms;android-" --sdk_root=

If you are using Linux and at the same time, you don't want to mess your hands with complex workarounds, I recommend you to download and use the Snap version of sdkmanager.

Remember to use androidsdk instead of sdkmanager in the terminal.

Android Studio is necessary when installing the command line tools even if it's not the editor you use to develop apps with. Unchecking the obsolete packages tab and downloading the tools should do it; that should clear the license issue and you can go back to your favorite IDE (such as VS Code).

Not the answer you're looking for? Browse other questions tagged android gitlab-ci android-build android-sdk-manager android-studio-3.6 or ask your own question.

307
How to install Android SDK Build Tools on the command line?
208
How do I download the Android SDK without downloading Android Studio?
143
Build Android Studio app via command line
107
How to install Android SDK on Ubuntu?
73
Stuck at “.android/repositories.cfg could not be loaded.”
43
Qt Creator Android error “Platform SDK installed”
21
“Could not find or load main class java.se.ee” while running sdkmanager --licences
20
Android Studio installs without sdkmanager
29
“sdkmanager: command not found” after installing Android SDK
12
SDKmanager : Warning: Could not create setting. java.lang.IllegalArgumentException
See more linked questions