Where is the right place in Ruby on Rails 3.1 to put the jQuery UI theme?

According to Autocomplete fields in Ruby on Rails 3.1 with jQuery UI I should put a jQuery UI theme in vendor/assets/stylesheets folder. That sounds like a smart place to have it, but I don't get it to work :-(.

I could of course be using the old way with just putting the theme in the public/stylesheets/ folder, and using:

in application.html.erb, but trying to be a modern man, I would rather use the new way of doing tings :-).

This directly includes the jQuery UI provided by the jquery-rails gem. But the gem does not provide the theme files. For these, I added a theme directory under vendor/assets/stylesheets, containing:

Be sure to keep the theme's images directory with the CSS file! Do not put the image files under vendor/assets/images, or they won't be found by jQuery (which search them under /assets/images).

Finally, changed the app/assets/stylesheets/application.css file to:

Example of a working setup:

I've fallen down to doing it the old way:

I put the jQuery folder, containing the theme (unchanged with both CSS and images folder) in the assets/stylesheets folder, and putting in: <%= stylesheet_link_tag "jquery/ui-lightness/jquery-ui-1.8.13.custom" %> in app/views/layouts/application.html.erb file. This solution is the one with less hazel when I will update jQuery later.

(Thanks for all suggestions on the solution. It is time to conclude.)

I like to selectively download jQuery UI JavaScript code so that I can easily upgrade to any future versions and have a light-weight jQuery UI (include needed files only, here progressbar.js).

I have the following setup for the "Dot Luv" jQuery UI theme.

The images are from jquery-ui-1.8.16.custom/development-bundle/themes/dot-luv/images. 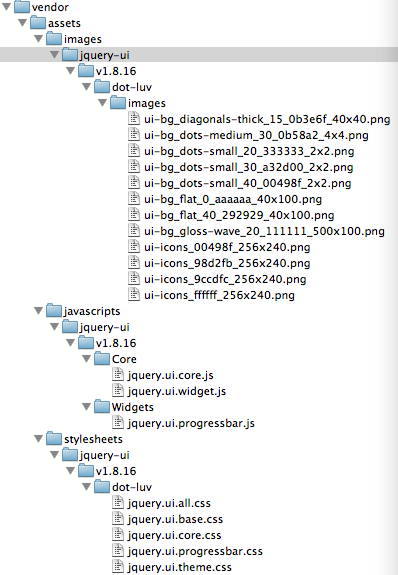 I know this thread already has a lot of answers but I'm going to throw in what worked best for me.

There is a gem called jquery-ui-themes that includes the default jQuery UI themes already converted to sass using the image-path helper. So you can include the gem and get any of the default themes out of the box just by adding them to your application.css file

If you want to use your own custom theme (as I did) there is a rake task that will automatically convert the CSS file to SCSS and use the image-path helper to find the right path.

For the CSS files, I like to do @import instead to have more control over the load order of CSS files. To do this, I have to add the .scss extension to the app/assets/stylesheets/application.css file, and also to all CSS files I want to import, like the jQuery UI CSS file.

Then I put everything jQuery UI related in vendor/assets like this:

Note that you can create additional folder in the stylesheets path like I did here with "jquery-ui/ui-lightness" path. That way you can keep multiple jQuery themes nicely separated in their own folders.

** Restart your server to load any newly created load paths **

Ryan Bates has some excellent screencasts about the asset pipeline and Sass in Ruby on Rails 3.1, where he shows how to use the @import function in Sass. Watch it here:

Edit: I forgot to mention that this works both locally and on Heroku on the Cedar stack.

There is now a jquery-ui-rails gem (see announcement). It packages the images as assets (and correctly references them from the CSS files) so things Just Work. :-)

So, here's one way to do it that lacks the downsides of some of the others mentioned here -- it doesn't require you to take apart the theme and put parts of it in different places, it doesn't require symbolic links, and it still allows you to compile the theme css into the one main css as part of the asset pipeline. It does not require a monkey patch like Nash Bridges' suggestion.

However, it does require an additional kind of hacky configuration line. (a one-liner though, basically).

Okay, put your theme in vendor/assets/jquery/ui-lightness/, like you wanted to. (will also work in lib/assets or app/assets, same way).

in your application.css. So far so good. Now to get the images to show up right, just add this to config/application.rb:

For me, it now works in dev, production, and other non-standard asset configs I could think of (like dev with debug=false, which trips up some of the other attempted solutions).

Building on a number of other suggestions here, I found a solution that works in my dev environment and in production on Heroku.

I added jquery-ui-1.8.16.custom.css and the associated images folder to vendor/assets/stylesheets (I found that unless the images folder was in the same folder as vendor.css it didn't work).

No other changes were necessary for this to work in the Heroku production environment.

Thanks to @denysonique, @softRli and @Paul Cook for their previous answers which helped me.

To get this to work on both my local dev environment and on Heroku, I did almost the same thing as denysonique suggested, but with a couple of differences at the end:

And second, my symbolic link was:

This is what finally worked for me.

There's a proposed fix in Ruby on Rails that makes precompilation of jQuery UI's images work.

(As of 3.1.0rc6, the asset precompiler uses the regular expression /\w+\.(?!js|css).+/ to find things to compile. This misses all the jQuery UI images because their names include dashes and underscores.)

Combining suggestions here is what got things working for me:

In production.rb I added this:

That is what it took to get the images to get precompiled and resolve without editing the jQuery UI theme CSS file or moving the images out of the theme CSS folder.

I think you can put ui styles in app/assets/stylesheets. Do something like this:

What I did to get everything to work properly is as follows.

1.) Added the CSS to the assets/stylesheets folder

2.) Added the images to the assets/images folder

3.) Removed the paths to all the images in the CSS using find "url(images/" and replace with "" leaving just the image file name.

Bingo! Everything should work correctly.

Using Ruby on Rails 3.1.1, I simply placed the files as follows. No other changes were required.

Get the CDN hosted theme from Google:

For that moment, I found not a perfect but working a solution.

Assuming you have jQuery UI theme in the /vendor/assets/stylesheets/ folder. Then you have to modify application.css:

index.css in every /vendor/assets/stylesheets/ subfolder guarantees that stylesheets like jquery-ui-1.8.11.custom.css will be compiled (if you require that subfolder).

config.assets.paths ensures that folders like /vendor/assets/stylesheets/ui-lightness/images are visible at the application root scope.

Not the answer you're looking for? Browse other questions tagged jquery-ui ruby-on-rails-3.1 or ask your own question.

0
Rails 3.1 Stylesheets giving trouble, get Routing Error
12
Where to put Galleria (jQuery image gallery framework) in Rails 3.1 Asset Pipeline?
4
Where should JavaScript with embedded Ruby code go in a Rails 3.1 app?
9
Rails 3.1 newbie : where should I put javascript code?
0
link_to confirm, no matter the answer will always execute the action
0
rails 3.1 asset pipeline routing error
1
Asset Pipeline and Rails 3.1 JS library specific to only one page in one controller
0
Rails 3.1 JQuery Icons
0
Rails 3.1 and functionless jQuery-ui images
3
Error: File to import not found or unreadable: compass. in rails 3.1