In Netbeans and Eclipse you can hit CTRL + Shift + Down (i think thats netbeans) and it will duplicate a line of code. Is that possible in SQL Server Management Studio? This is running with SQL Server 2008

I think that you can hit CTRL + C without any text selected and in clipboard you got full line after that hit enter and paste line.

If you don't use the shortcut for Results to Grid (which currently occupies CTRL+D), then you can update the key bindings in the Options menu. 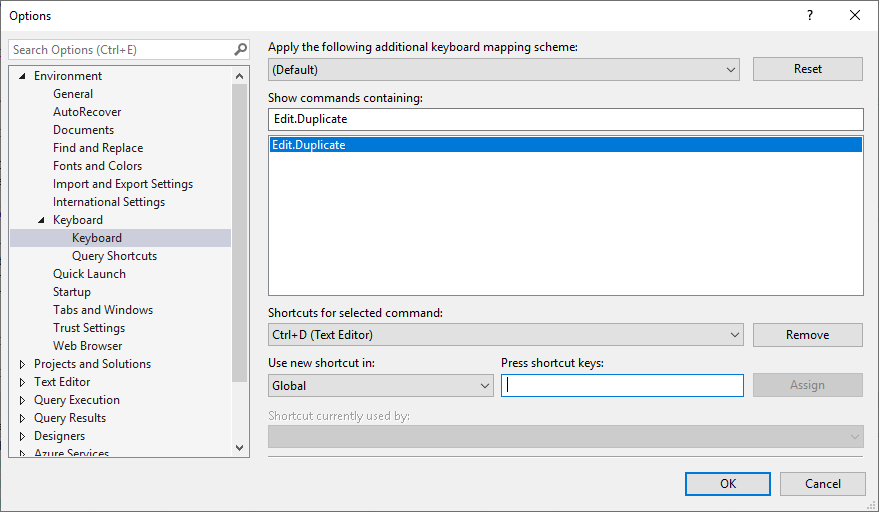 When you click "OK" to leave Options, you should find that you can use the key binding straight away.

I use this AutoHotKey script to replicate the CTRL + D "duplicate line" functionality I'm used to from Visual Studio:

I like @Matt Kemp's AutoHotKey script solution, but I used this script instead:

Here's my version of an Autohotkey script to allow CTRL+D to duplicate the current line without altering the clipboard. My first exposure to this hotkey was in Notepad++ and it grew on me. A common use case is wanting to alter a line of text with a value in my clipboard, but I first want to make a copy of the line as a backup I can comment out.

This answer is similar to the one by @Matt Kemp, but as noted in the comments, there is some flakiness in what appears to be a simple script.

My answer has these differences:

There are two flaky issues that I am trying to overcome by adding sleep statements. On occasion, when it saves the current clipboard into a variable, it actually saves the current line into the variable, resulting in never restoring the original clipboard contents. On some other occasions, the value in the clipboard gets pasted on the screen instead of duplicating the current line. I have hacked the script to add some delays that typically give me the result I'm looking for. It's not as snappy as I'd like, but I'll take a little delay over inconsistent results.

SetTitleMatchMode, 2 ; A window's title can contain WinTitle anywhere inside it to be a match.

I feel like I need to tweak this code every so often because I'm noticing it acting flaky in some application. Please chime in if you have a tested improvement that can be made.

In SSMS 18.2 [edit.Duplicate] associated with [CTRL+E, V] and with [CTRL+D]. The easiest way is just remove association [CTRL+D] with [Query.ResultstoGrid]. Then this will state only for [edit.Duplicate]. After that you can use [CTRL+D] for duplicating rows. I think it is not often case when you change saving result into grid or into file. 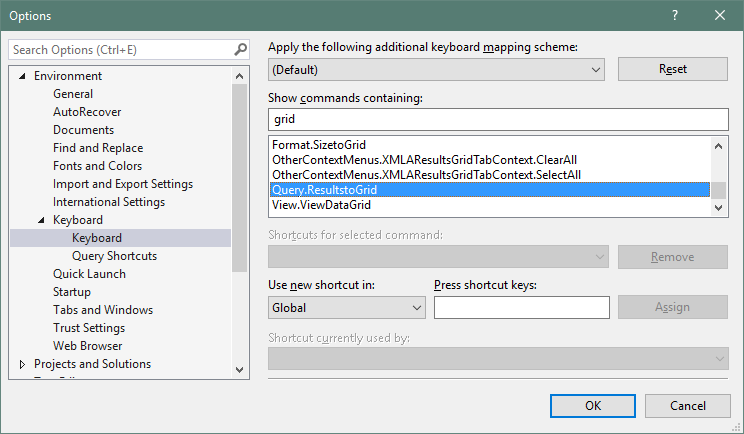 Not the answer you're looking for? Browse other questions tagged sql-server-2008 ssms or ask your own question.