How can I improve the performance of my custom OpenGL ES 2.0 depth texture generation?

I have an open source iOS application that uses custom OpenGL ES 2.0 shaders to display 3-D representations of molecular structures. It does this by using procedurally generated sphere and cylinder impostors drawn over rectangles, instead of these same shapes built using lots of vertices. The downside to this approach is that the depth values for each fragment of these impostor objects needs to be calculated in a fragment shader, to be used when objects overlap.

Unfortunately, OpenGL ES 2.0 does not let you write to gl_FragDepth, so I've needed to output these values to a custom depth texture. I do a pass over my scene using a framebuffer object (FBO), only rendering out a color that corresponds to a depth value, with the results being stored into a texture. This texture is then loaded into the second half of my rendering process, where the actual screen image is generated. If a fragment at that stage is at the depth level stored in the depth texture for that point on the screen, it is displayed. If not, it is tossed. More about the process, including diagrams, can be found in my post here.

The generation of this depth texture is a bottleneck in my rendering process and I'm looking for a way to make it faster. It seems slower than it should be, but I can't figure out why. In order to achieve the proper generation of this depth texture, GL_DEPTH_TEST is disabled, GL_BLEND is enabled with glBlendFunc(GL_ONE, GL_ONE), and glBlendEquation() is set to GL_MIN_EXT. I know that a scene output in this manner isn't the fastest on a tile-based deferred renderer like the PowerVR series in iOS devices, but I can't think of a better way to do this.

My depth fragment shader for spheres (the most common display element) looks to be at the heart of this bottleneck (Renderer Utilization in Instruments is pegged at 99%, indicating that I'm limited by fragment processing). It currently looks like the following:

On an iPad 1, this takes 35 - 68 ms to render a frame of a DNA spacefilling model using a passthrough shader for display (18 to 35 ms on iPhone 4). According to the PowerVR PVRUniSCo compiler (part of their SDK), this shader uses 11 GPU cycles at best, 16 cycles at worst. I'm aware that you're advised not to use branching in a shader, but in this case that led to better performance than otherwise.

When I simplify it to

Finally, if I just output a constant color:

The nonlinear scaling in rendering time and sudden change between iPad and iPhone 4 for the second shader makes me think that there's something I'm missing here. A full source project containing these three shader variants (look in the SphereDepth.fsh file and comment out the appropriate sections) and a test model can be downloaded from here, if you wish to try this out yourself.

If you've read this far, my question is: based on this profiling information, how can I improve the rendering performance of my custom depth shader on iOS devices?

Based on the recommendations by Tommy, Pivot, and rotoglup, I've implemented some optimizations which have led to a doubling of the rendering speed for the both the depth texture generation and the overall rendering pipeline in the application.

First, I re-enabled the precalculated sphere depth and lighting texture that I'd used before with little effect, only now I use proper lowp precision values when handling the colors and other values from that texture. This combination, along with proper mipmapping for the texture, seems to yield a ~10% performance boost.

More importantly, I now do a pass before rendering both my depth texture and the final raytraced impostors where I lay down some opaque geometry to block pixels that would never be rendered. To do this, I enable depth testing and then draw out the squares that make up the objects in my scene, shrunken by sqrt(2) / 2, with a simple opaque shader. This will create inset squares covering area known to be opaque in a represented sphere.

I then disable depth writes using glDepthMask(GL_FALSE) and render the square sphere impostor at a location closer to the user by one radius. This allows the tile-based deferred rendering hardware in the iOS devices to efficiently strip out fragments that would never appear onscreen under any conditions, yet still give smooth intersections between the visible sphere impostors based on per-pixel depth values. This is depicted in my crude illustration below: 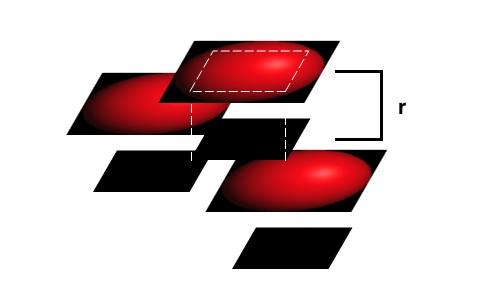 In this example, the opaque blocking squares for the top two impostors do not prevent any of the fragments from those visible objects from being rendered, yet they block a chunk of the fragments from the lowest impostor. The frontmost impostors can then use per-pixel tests to generate a smooth intersection, while many of the pixels from the rear impostor don't waste GPU cycles by being rendered.

I hadn't thought to disable depth writes, yet leave on depth testing when doing the last rendering stage. This is the key to preventing the impostors from simply stacking on one another, yet still using some of the hardware optimizations within the PowerVR GPUs.

In my benchmarks, rendering the test model I used above yields times of 18 - 35 ms per frame, as compared to the 35 - 68 ms I was getting previously, a near doubling in rendering speed. Applying this same opaque geometry pre-rendering to the raytracing pass yields a doubling in overall rendering performance.

Oddly, when I tried to refine this further by using inset and circumscribed octagons, which should cover ~17% fewer pixels when drawn, and be more efficient with blocking fragments, performance was actually worse than when using simple squares for this. Tiler utilization was still less than 60% in the worst case, so maybe the larger geometry was resulting in more cache misses.

Based on Pivot's suggestion, I created inscribed and circumscribed octagons to use instead of my rectangles, only I followed the recommendations here for optimizing triangles for rasterization. In previous testing, octagons yielded worse performance than squares, despite removing many unnecessary fragments and letting you block covered fragments more efficiently. By adjusting the triangle drawing as follows:

I was able to reduce overall rendering time by an average of 14% on top of the above-described optimizations by switching to octagons from squares. The depth texture is now generated in 19 ms, with occasional dips to 2 ms and spikes to 35 ms.

I've revisited Tommy's idea of using the step function, now that I have fewer fragments to discard due to the octagons. This, combined with a depth lookup texture for the sphere, now leads to a 2 ms average rendering time on the iPad 1 for the depth texture generation for my test model. I consider that to be about as good as I could hope for in this rendering case, and a giant improvement from where I started. For posterity, here is the depth shader I'm now using:

I've updated the testing sample here, if you wish to see this new approach in action as compared to what I was doing initially.

I'm still open to other suggestions, but this is a huge step forward for this application.

On the desktop, it was the case on many early programmable devices that while they could process 8 or 16 or whatever fragments simultaneously, they effectively had only one program counter for the lot of them (since that also implies only one fetch/decode unit and one of everything else, as long as they work in units of 8 or 16 pixels). Hence the initial prohibition on conditionals and, for a while after that, the situation where if the conditional evaluations for pixels that would be processed together returned different values, those pixels would be processed in smaller groups in some arrangement.

Although PowerVR aren't explicit, their application development recommendations have a section on flow control and make a lot of recommendations about dynamic branches usually being a good idea only where the result is reasonably predictable, which makes me think they're getting at the same sort of thing. I'd therefore suggest that the speed disparity may be because you've included a conditional.

As a first test, what happens if you try the following?

Many of these points have been covered by others who have posted answers, but the overarching theme here is that your rendering does a lot of work that will be thrown away:

Note that 2) and 3) apply to your raytracing shaders as well.

I'm no mobile platform expert at all, but I think that what bites you is that:

Wouldn't an additional pass, drawn before the depth test be helpful ?

This pass could do a GL_DEPTH prefill, for example by drawing each sphere represented as quad facing camera (or a cube, that may be easier to setup), and contained in the associated sphere. This pass could be drawn without color mask or fragment shader, just with GL_DEPTH_TEST and glDepthMask enabled. On desktop platforms, these kind of passes get drawn faster than color + depth passes.

Then in you depth computation pass, you could enable GL_DEPTH_TEST and disable glDepthMask, this way your shader would not be executed on pixels that are hidden by nearer geometry.

This solution would involve issuing another set of draw calls, so this may not be beneficial.

Not the answer you're looking for? Browse other questions tagged iphone ios ipad opengl-es glsl or ask your own question.

4
How do I draw a filled circle with OpenGL ES on iPhone?
5
Shader optimization for retina screen on iOS
6
Writing texture data onto depth buffer
4
optimizing openGL ES 2.0 2D texture output and framerate
1
Is there a maximum number of OpenGL ES calls you can make on iPad?
2
How many pixel shader cycles is to heavy for iPad2
1
Low shader performance on iPad 1st gen

1236
How can I disable the UITableView selection?
1754
How can I make a UITextField move up when the keyboard is present - on starting to edit?
15
OpenGL ES 2.0 Rendering with a Texture
1
glTexGen in OpenGL ES 2.0
12
In OpenGL ES 2.0, How to read neighboring texels from a Sampler?
5
OpenGL ES 2.0 Derivative Texture
4
OpenGL ES 2.0 Failing to correctly assign the color attribute
0
WebGL - Vertices don't render when assigning varying variable
1
In OpenGL ES 2.0 depth texture buffer is not working when using FBO with texture depth buffer