I'm trying to understand the logic of using JSON web tokens with private/public keys (RS512) when signing a payload of data sent from a client (in this case, a React Native App) to my server.

I thought the whole point of private/public keys was to keep the private key private (on my server) and hand the public key to the person who's successfully logged into the app.

I thought, with each API request to my server, the authenticated user of the app would use the public key to create the JWT (on the client side) and the server would use the private key to verify the signature/payload from the API request.

It seems I have it backwards because everywhere I read, you're supposed to sign a JWT with the private key -- but that goes against my understanding of who's in possession of the keys.

Depending on how the keys are created, some private keys can have a passcode which is supposed to be secret! So if the private key and the secret is out in the open (in client-side code) how secure can that be?

And where does the encryption come in? If the user of the app is sending sensitive data in the API, am I supposed to encrypt the payload and sign it with the JWT on the client side and then let the server verify the JWT signature and decrypt the data?

This tutorial was helpful https://medium.com/@siddharthac6/json-web-token-jwt-the-right-way-of-implementing-with-node-js-65b8915d550e but it seems backwards.

Any explanation would definitely help because all of the on-line tutorials aren't making sense.

With JWT, the possession and the use of the key materials are exactly the same as any other contexts where cypher operations occur.

The encryption is rarely used with JWT. Most of the time the HTTPS layer is sufficient and the token itself only contain a few information that are not sensitive (datatime, IDs...).

The issuer of the token (the authentication server) has a private key to generate signed tokens (JWS). These tokens are sent to the clients (an API server, a web/native application...). The clients can verify the token with the public key. The key is usually fetched using a public URI.

If you have sensitive data that shall not be disclosed to a third party (phone numbers, personnal address...), then the encrypted tokens (JWE) is highly recommended. In this case, each client (i.e. recipient of a token) shall have a private key and the issuer of the token must encrypt the token using the public key of each recipient. This means that the issuer of the token can select the appropriate key for a given client.

Solution for JWE in React Native and Node Backend

The hardest part was finding a method that works in both RN and Node because I can't just use any Node library in RN.

I'm transmitting all of the API calls over HTTPS.

Create a JWE to encrypt the token and payload simultaneously.

Hope this figure adds some clarity. 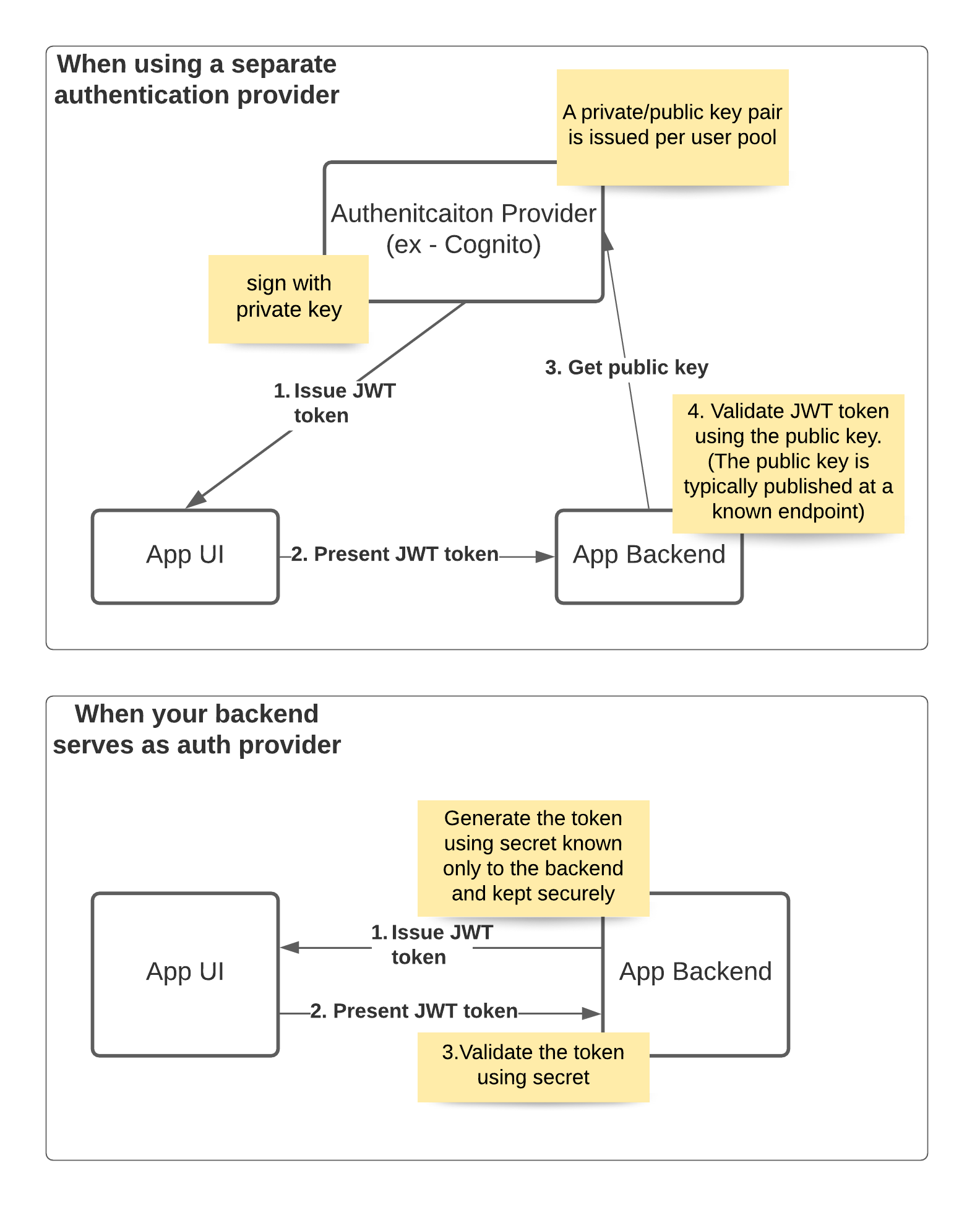 jwt.io does a great job of explaining that there is more than one way to sign the JWT. Users may sign and verify with a single secret, or use a public/private key pair for verifying/signing respectively.

JSON Web Token (JWT) is an open standard (RFC 7519) that defines a compact and self-contained way for securely transmitting information between parties as a JSON object. This information can be verified and trusted because it is digitally signed. JWTs can be signed using a secret (with the HMAC algorithm) or a public/private key pair using RSA or ECDSA.

Although JWTs can be encrypted to also provide secrecy between parties, we will focus on signed tokens. Signed tokens can verify the integrity of the claims contained within it, while encrypted tokens hide those claims from other parties. When tokens are signed using public/private key pairs, the signature also certifies that only the party holding the private key is the one that signed it.