Ionic 4: You need to use a different package name because "io.ionic.starter" already exists in Google Play

I am trying to deploy my ionic app to Google Play. However, when I upload the app apk file, I get this error message You need to use a different package name because "io.ionic.starter" already exists in Google Play. According to this thread: Error while uploading apk built on Ionic to the google playstore I need to change my config.xml file, I only see config file in the path app/res/xml/config.xml which has this

How do I solve this issue? note that I have this in capacitor.config.json

Take a look at the build.gradle file in android->app folder and double-check that the applicationId is not "io.ionic.starter". The build.gradle will probably look something like this:

If you update the applicationId in the build.gradle file and rebuild the project in Android Studio I think you will be good to go.

I fixed this problem by replacing all occurrences of io.ionic.starter by io.ionic.stackie in /android directory. This might not be the best way to solve this issue but it worked with me.

I was able to fix this issue the following way (macOS Monterey):

In Android Studio, go to File > Project Structure. There you can change the Application ID.

Of course you need to rebuild your project: Build > Generate Signed Bundle / APK…

If this does not work, read on for all of the steps I did before, even though I think that they could be skipped.

first in Android Studio I replaced all occurrences of "io.ionic.starter" by going to Edit > Find > Replace in Files …

Then in Android Studio I searched for files with 'config' in them and looked for "io.ionic.starter" and replaced it there manually. Even though the first step should have replaced it, it still was there.

As all of this did not help, I got inspired by @x7R5fQ and did a double click on the android folder in the Project tab of Android Studio. Suddenly a Window called 'Project Structure' opened and I was able to change the Application ID there.

not this config file. there is another config file is located in project root folder.you have to change the id. 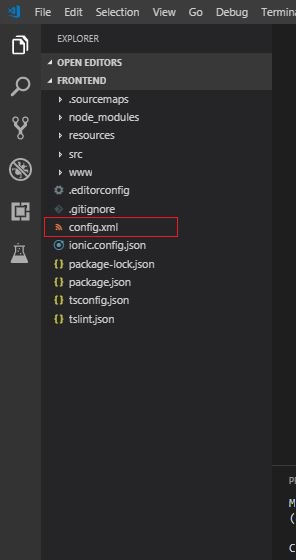 Not the answer you're looking for? Browse other questions tagged android android-studio ionic-framework ionic4 or ask your own question.

315
This version of the application is not configured for billing through Google Play
1152
You need to use a Theme.AppCompat theme (or descendant) with this activity
216
How to change Android version and code version number?
1
Reupload the apk with a different package name after publishing the app on google play - Ionic
548
No matching client found for package name (Google Analytics) - multiple productFlavors & buildTypes
2
Upload failed: You need to use a different version code for your APK because you already have one with version code
6
Error while uploading apk built on Ionic to the google playstore
1
Ionic - Uploading new version to Google Play Dev results in error
0
Google Play downloaded Ionic application $http not working
1
Automatically detect new versions of Ionic 3 app in PlayStore