I have been following this document on how to update the settings in .json files. From what I could understand, I had to create a variable in the pipeline which matches the key I need to update. Let's say I have the following Json structure in my appsettings.json -

Suppose I have to update key1 to somenewvalue1 and key2.key3 to someothervalue3 and so on. So I created new variables by hitting the Variables button on the pipeline and added Key1 and key2.key3 as variables with appropriate values (as a side note, the value is a constant string, but I want this to be a dynamic value which will be provided by another task in the pipeline). Also, I provided the path for the appsetting file as shown in the image below - 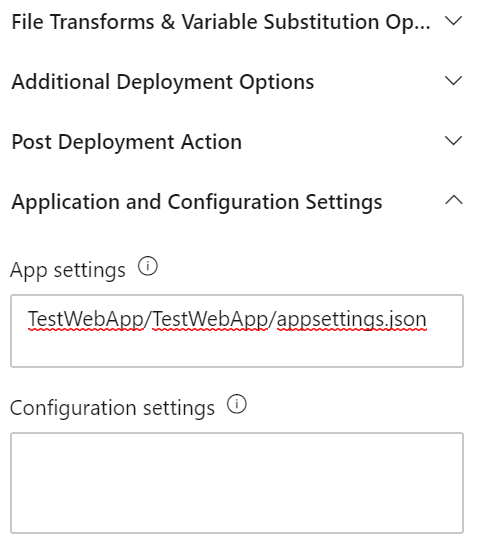 But, when I run the pipeline, I get the following error-

I came across this SO question and also created the app setting on azure portal, but this also didn't work

What am I doing wrong here.

As a side question, As seen in the first image, what is the difference between File Transformation & Variable Substitution Options and Application and Configuration Settings and when to use what.

Based on the comment, I was able to resolve the issue, so no more errors and I was able to verify the updated setting in the azure portal.

However, when I see the appsetting.json from Kudu inside the Site wwwroot folder under Browse Directory, I couldn't see it updated. Why are these valuees different, and if so, which value is actually considered.

So it seems that one expects JSON containing the settings, and not a file path.

Not the answer you're looking for? Browse other questions tagged azure azure-devops azure-web-app-service appsettings or ask your own question.