Stitching 2 routes together to make the quickest combined route

I have an issue. We are using Googles mapping API to route waypoints on a map. It works well but there is a 25 route limit that Google enforces and any after that cost an arm and a leg. We are trying to stitch routes together using 25 waypoint blocks. Here is the issue. How would you order the routes prior to splitting them into 25 blocks and then routing them. The first waypoint in a block is the destination of the last block.

Here is a map where the order is basically an expanding square that, when it touches a waypoint, adds it to the block of 25. You can see that is not the fastest route. The squares indicate an issue that is present where a waypoint for group 2 (purple) cross over the first group and are nowhere near each other.

Here is that code (react native but not looking for code):

Another options is maybe sweep left to right or top to bottom?

When the origin can be placed anywhere within a clump of waypoints I'm not sure the best way to initially order them so the map will flow smoothly from one group of 25 to the next. 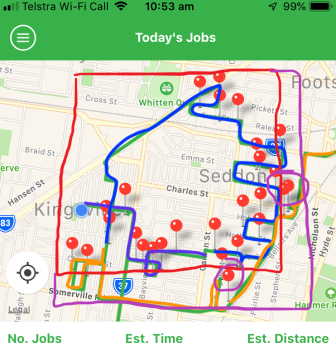 Browse other questions tagged google-maps routes maps or ask your own question.