What are Covering Indexes and Covered Queries in SQL Server?

Can you explain the concepts of, and relationship between, Covering Indexes and Covered Queries in Microsoft's SQL Server?

A covering index is one which can satisfy all requested columns in a query without performing a further lookup into the clustered index.

There is no such thing as a covering query.

Have a look at this Simple-Talk article: Using Covering Indexes to Improve Query Performance.

A clustered index can always cover a query, if the columns in the select list are from the same table.

The following links can be helpful, if you are new to index concepts:

Example: I have a table with three columns: ID, Fname and Lname. 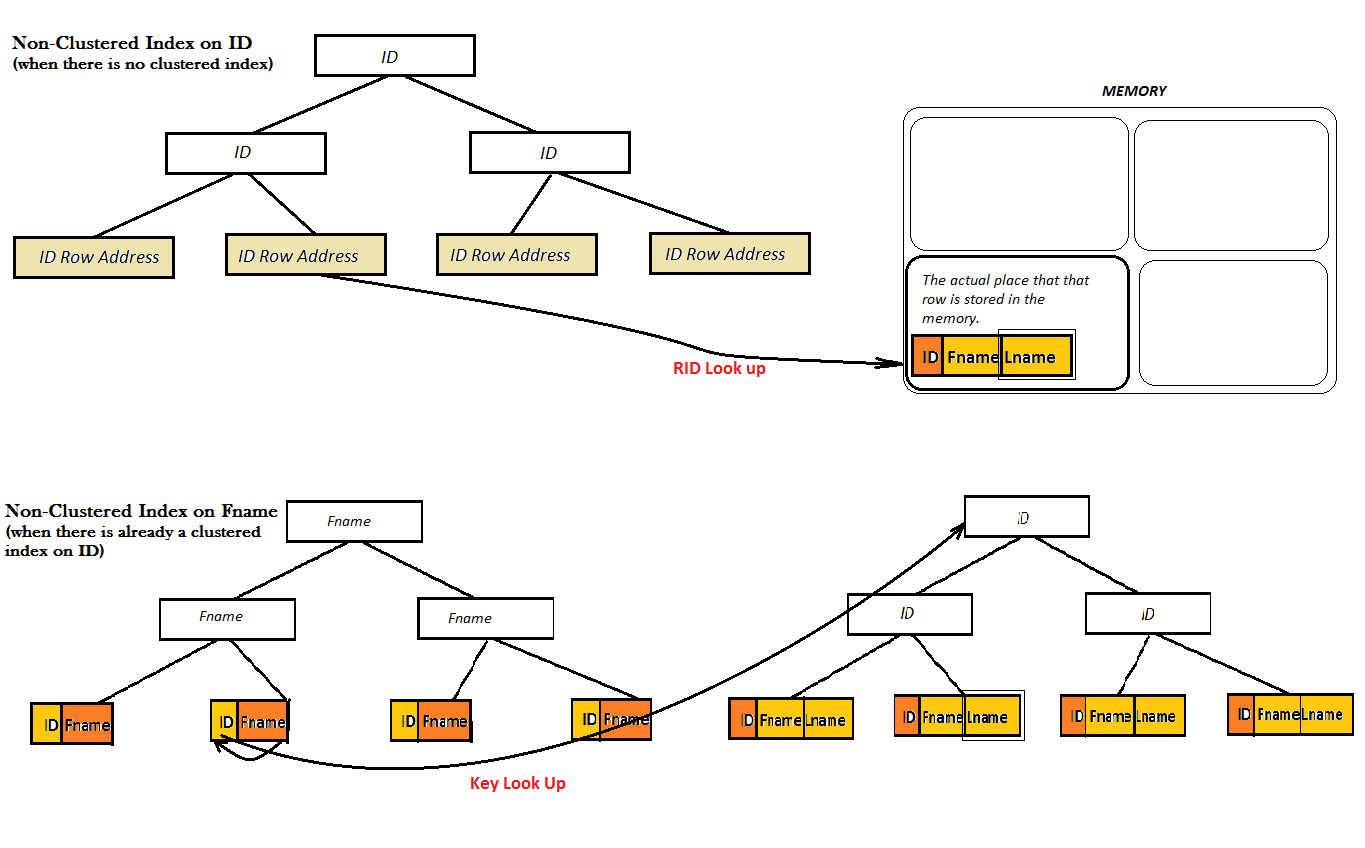 As the two diagrams show, such Non-Clustered indexes do not provide a good performance, because they cannot find the favorite value (i.e. Lname) solely from the B-Tree. Instead they have to do an extra Look Up step (either Key or RID look up) to find the value of Lname. And, this is where covered index comes to the screen. Here, the Non-Clustered index on ID coveres the value of Lname right next to it in the leaves of the B-Tree and there is no need for any type of look up anymore.

A covered query is a query where all the columns in the query's result set are pulled from non-clustered indexes.

A query is made into a covered query by the judicious arrangement of indexes.

Here's an article in devx.com that says:

Creating a non-clustered index that contains all the columns used in a SQL query, a technique called index covering

I can only suppose that a covered query is a query that has an index that covers all the columns in its returned recordset. One caveat - the index and query would have to be built as to allow the SQL server to actually infer from the query that the index is useful.

For example, a join of a table on itself might not benefit from such an index (depending on the intelligence of the SQL query execution planner):

Let's assume there's an index on PersonID,ParentID,Name - this would be a covering index for a query like:

Probably wouldn't benifit so much, even though all of the columns are in the index. Why? Because you're not really telling it that you want to use the triple index of PersonID,ParentID,Name.

Instead, you're building a condition based on two columns - PersonID and ParentID (which leaves out Name) and then you're asking for all the records, with the columns PersonID, Name. Actually, depending on implementation, the index might help the latter part. But for the first part, you're better off having other indexes.

A covering query is on where all the predicates can be matched using the indices on the underlying tables.

This is the first step towards improving the performance of the sql under consideration.

a covering index is the one which gives every required column and in which SQL server don't have hop back to the clustered index to find any column. This is achieved using non-clustered index and using INCLUDE option to cover columns. Non-key columns can be included only in non-clustered indexes. Columns can’t be defined in both the key column and the INCLUDE list. Column names can’t be repeated in the INCLUDE list. Non-key columns can be dropped from a table only after the non-key index is dropped first. Please see details here

So, one solution is to create a non-clustered index that has the column containing the requested value inside the index. In this way, there is no need to reference the Clustered Index, and the Optimizer should be able to hook that index in the Execution Plan with no hint. If, however, there is a Predicate naming the single column clustering key and an argument to a scalar value on the clustering key, the Clustered Index Seek Operator will still be used, even if there is already a covering index on a second column in the table without an index.

An index that contains (or "covers") all the data needed to satisfy a query is called a covering index.

When you issue a query that is covered by an index (an indexed-covered query), you'll see "Using Index" in the Extra column in EXPLAIN.

Not the answer you're looking for? Browse other questions tagged sql sql-server indexing or ask your own question.

5067
What is the difference between "INNER JOIN" and "OUTER JOIN"?
1302
SQL Server - Best way to get identity of inserted row?
2773
How can I prevent SQL injection in PHP?
3085
Add a column with a default value to an existing table in SQL Server
2039
How to return only the Date from a SQL Server DateTime datatype
2053
How to check if a column exists in a SQL Server table
1325
Check if table exists in SQL Server
2232
How to concatenate text from multiple rows into a single text string in SQL Server
1236
What do Clustered and Non-Clustered index actually mean?
4068
How do I UPDATE from a SELECT in SQL Server?