What is the native keyword in Java for?

While playing this puzzle (It's a Java keyword trivia game), I came across the native keyword.

What is the native keyword in Java used for?

The native keyword is applied to a method to indicate that the method is implemented in native code using JNI (Java Native Interface).

Example on GitHub for you to play with.

Underscores in Java package / file names must be escaped with _1 in the C function name as mentioned at: Invoking JNI functions in Android package name containing underscore

native allows you to:

This could be used to:

with the tradeoff of lower portability.

Analogous native extension APIs are also present in many other "VM languages" for the same reasons, e.g. Python, Node.js, Ruby.

The concept is exact the same in this context, except that you have to use Android boilerplate to set it up.

The official NDK repository contains "canonical" examples such as the hello-jni app:

In you unzip an .apk with NDK on Android O, you can see the pre-compiled .so that corresponds to the native code under lib/arm64-v8a/libnative-lib.so.

TODO confirm: furthermore, file /data/app/com.android.appname-*/oat/arm64/base.odex, says it is a shared library, which I think is the AOT precompiled .dex corresponding to the Java files in ART, see also: What are ODEX files in Android? So maybe the Java is actually also run via a native interface?

Example in the OpenJDK 8

We will conclude that it is implemented with a native call.

which leads us to jdk/src/share/classes/java/lang/Object.java#l212:

Now comes the hard part, finding where clone is amidst all the indirection. The query that helped me was:

which would find either C or C++ files that might implement Object's native methods. It leads us to jdk/share/native/java/lang/Object.c#l47:

which leads us to the JVM_Clone symbol:

which leads us to hotspot/src/share/vm/prims/jvm.cpp#l580:

After expanding a bunch of macros, we come to the conclusion that this is the definition point.

It marks a method, that it will be implemented in other languages, not in Java. It works together with JNI (Java Native Interface).

Native methods were used in the past to write performance critical sections but with Java getting faster this is now less common. Native methods are currently needed when

Straight from the Java Language Specification:

A method that is native is implemented in platform-dependent code, typically written in another programming language such as C, C++, FORTRAN,or assembly language. The body of a native method is given as a semicolon only, indicating that the implementation is omitted, instead of a block.

As SLaks answered, the native keyword is for calling native code.

It also used by GWT for implementing javascript methods.

The Java Native Interface (JNI) is a programming framework that enables Java code running in a Java Virtual Machine (JVM) to call, and to be called by, native applications (programs specific to a hardware and operating system platform) and libraries written in other languages such as C, C++ and assembly.

NATIVE is Non access modifier.it can be applied only to METHOD. It indicates the PLATFORM-DEPENDENT implementation of method or code.

native is a keyword in java , which is used to make unimplemented structure(method) like as abstract but it would be a platform dependent such as native code and execute from native stack not java stack.

Java native method provides a mechanism for Java code to call OS native code, either due to functional or performance reasons. 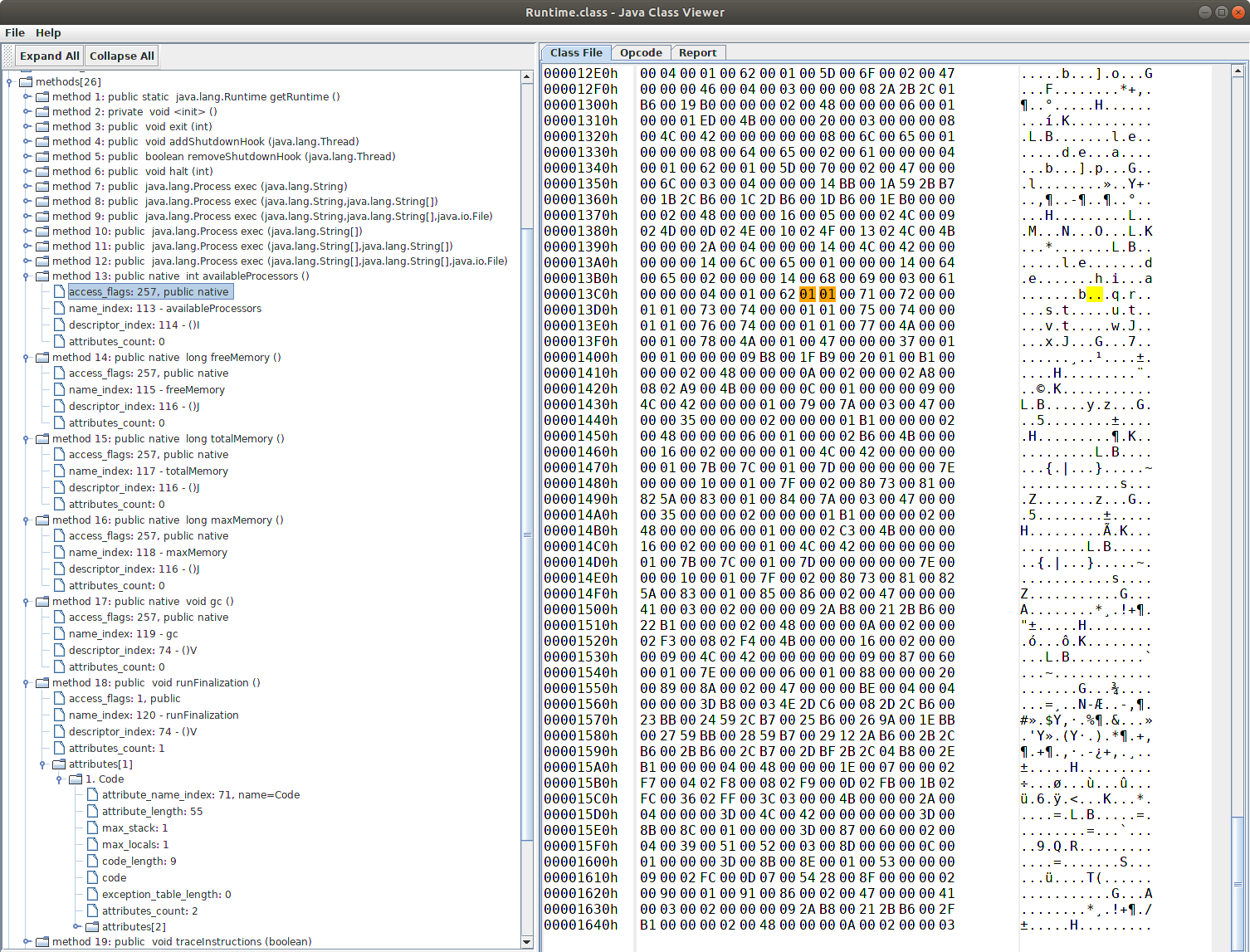 The in fact coding logic is in the corresponding Runtime.c file:

And these C coding is compiled into the libjava.so (Linux) or libjava.dll (Windows) file, located at JAVA_HOME/jmods/java.base.jmod/lib/libjava.so: 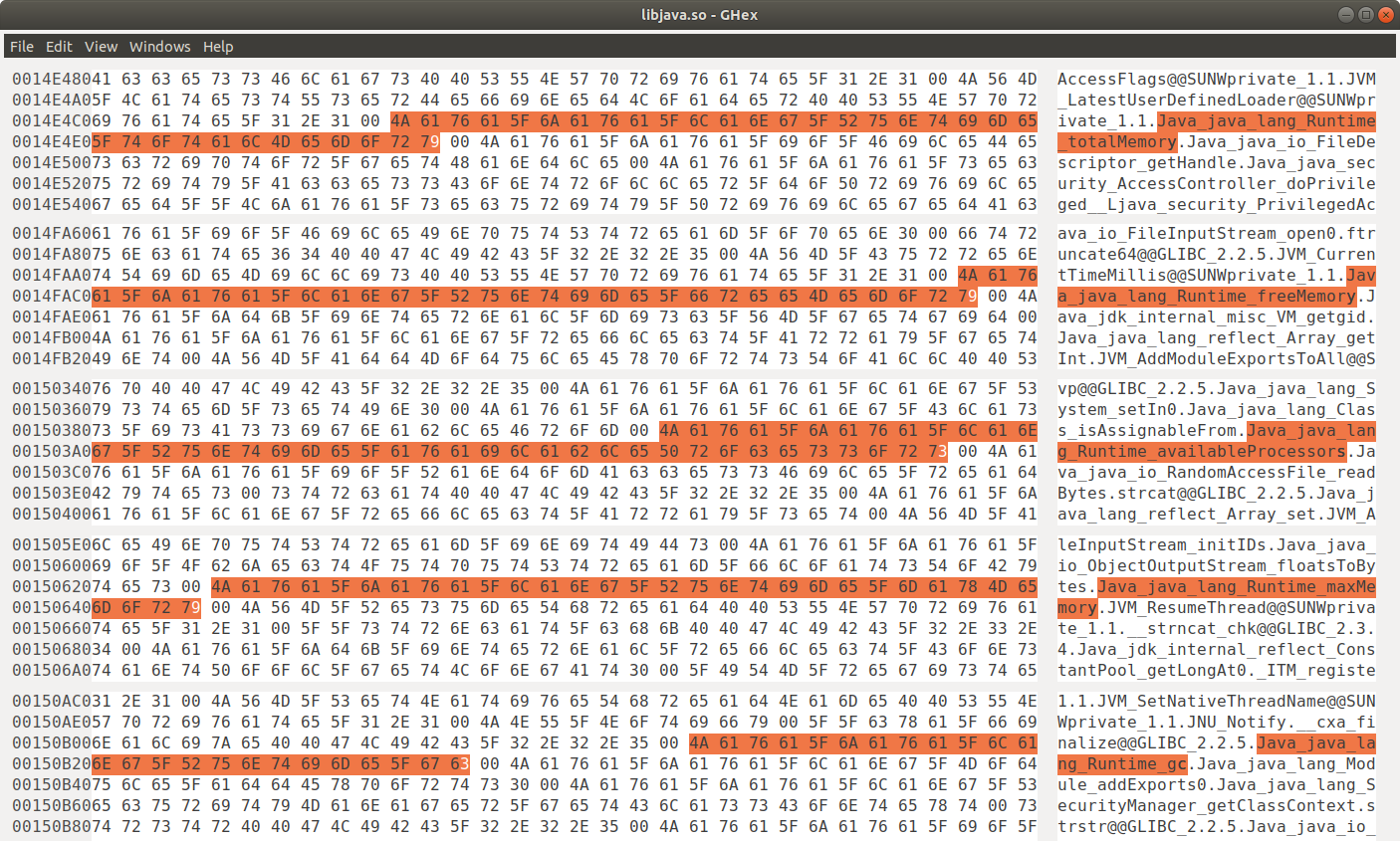 Not the answer you're looking for? Browse other questions tagged java java-native-interface native keyword or ask your own question.

72
What are native methods in Java and where should they be used?
35
What is a native implementation in Java?
7
Usage of native in Java
1
A method with no statements inside and ends with a semicolon
0
what is difference between Java Method And Native Method?
0
Why java.lang.Object class methods are native?
0
I don't understand how to DetectionBasedTracker functions
0
why the currentThread method does NOT have the method BODY?
82
What are ODEX files in Android?
49
How to call Java functions from C++?
See more linked questions

3871
What are the differences between a HashMap and a Hashtable in Java?
6882
Is Java “pass-by-reference” or “pass-by-value”?
1834
Java inner class and static nested class
704
What is the volatile keyword useful for?
3286
What is the difference between public, protected, package-private and private in Java?
4125
Avoiding NullPointerException in Java
1766
Does Java support default parameter values?
1583
What is the purpose of the var keyword and when should I use it (or omit it)?
1817
Comparing Java enum members: == or equals()?
3713
Proper use cases for Android UserManager.isUserAGoat()?