(firebase functions) Error: Forbidden Your client does not have permission to get URL /

Your client does not have permission to get URL / < Function Name > from this server.

Nothing has been changed to my role. It is strange that since yesterday, whatever function I deployed, threw those errors.

In gcp console/cloud functions, where you can see permissions of the function that was selected, I've noticed that "cloud functions invoker" was not assigned to that function. I thought this should be added to any function by default as long as I have an editor access but strangely it does not add them anymore. other functions that were deployed since yesterday have the same issue

any suggestions or advices will be appreciated. Thank you

As of January 15, 2020, HTTP functions require authentication by default. You can specify whether a function allows unauthenticated invocation at or after deployment.

So here's the answer from the firebase team

The issue you are experiencing is likely caused by the fact that after January 15, 2020, Google Cloud Functions automatically creates HTTP functions to be >private by default.

Please, update the CLI, by running the following command:

This will ensure that future HTTP functions that are created will be publicly accessible.

Lastly, for the existing functions that has the permission issues, you will need >to manually set a function to public using Cloud Console or gcloud CLI.

If you have any questions or you are still facing this issue, please, don’t >hesitate to write back.

edited* There could be several reasons to cause this issue.

Unfortunately, you can't do this in Firebase, you have to go into the Google Cloud project which 'hosts' your firebase project. You can follow this guide by Google, and have a look at the screenshots below: 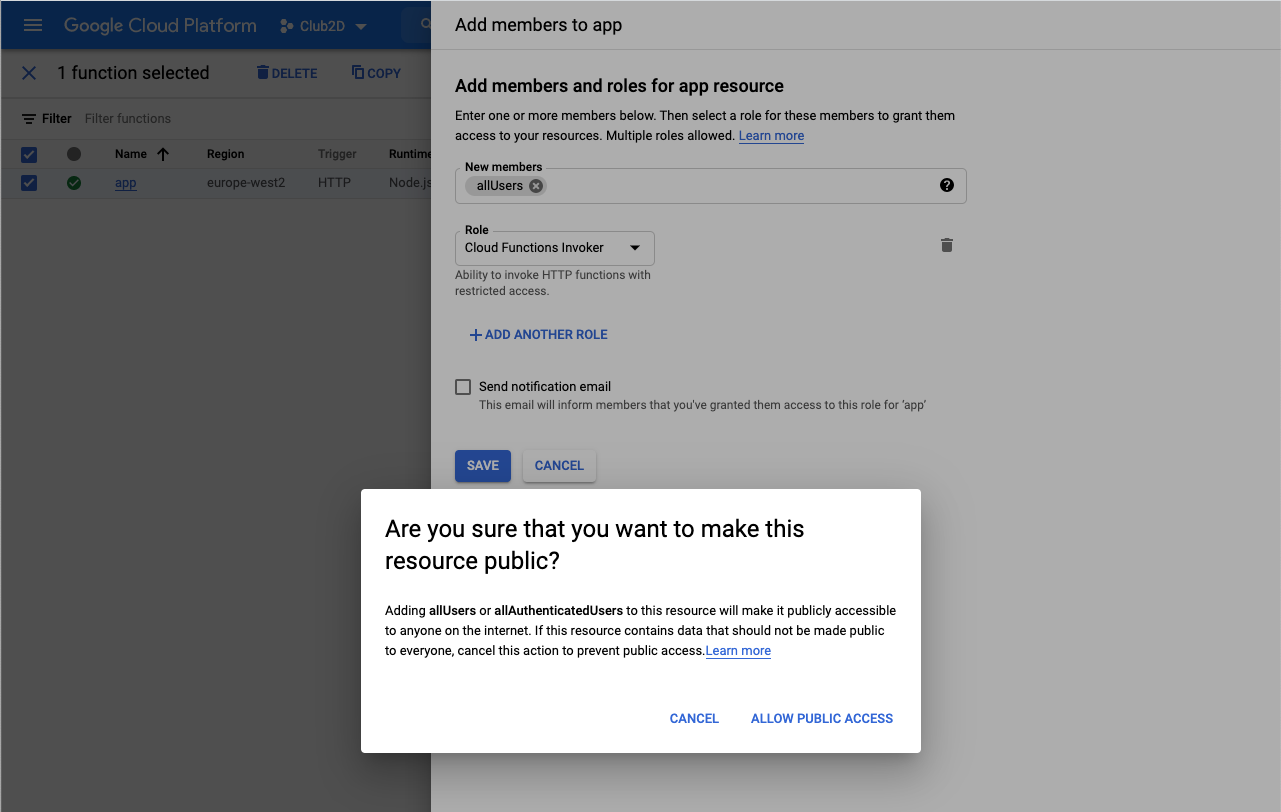 You should see Allow unauthenticated now

To allow unauthenticated invocation of a function, you add the special allUsers member id to the function and grant it the Cloud Functions Invoker role:

You can limit domain access in your function, for example:

I defined my Firebase cloud functions in typescript/JS and deploy using Firebase CLI. I got this error after customizing the deployment settings, and I fixed it by specifying invoker="public" - I did not need to dig into IAM settings or use the console or CLI to fix.

updating firebase-tools wasn't enough in my case because i already deployed that function and updating it didn't fix the issue, i had to delete it and deploy again

Not the answer you're looking for? Browse other questions tagged firebase google-cloud-functions or ask your own question.

Google Cloud Collective See more
This question is in a collective: a subcommunity defined by tags with relevant content and experts.

0
getting error : Your client does not have permission to get URL in firebase functions