macOS Big Sur itself is capable of using a Siri voice for TTS, as evidenced by the fact that you can select one as the system voice in System Preferences > Accessibility > Speech, e.g. in combination with the shortcut-key-based Speak selected text when the key is pressed feature.
(Curiously, though, a Siri voice selected as the system voice does not take effect if you right-click text and select Speech > Start Speaking from the context menu and possibly also not for other accessibility features - this discrepancy is the subject of this MacRumors forum thread.)

Unfortunately, it appears that this functionality isn't exposed through a utility or API.

[1] The bundle IDs of the installed Siri voices can be determined as follows:

Note: The above works for me as of macOS Big Sur, upgraded from an earlier version, with at least one Siri voice installed. Siu Ching Pong -Asuka Kenji- reports that on a freshly installed, non-upgraded Big Sur machine the System/Library/Speech/Voices directory is empty.

To find the bundle IDs of all available (downloadable) Siri voices:

In a WWDC20 talk, Apple says Siri voices are not available in AVSpeechSynthesizer.

The talk is called "Create a seamless speech experience in your apps." Apparently this applies to Catalina as well. 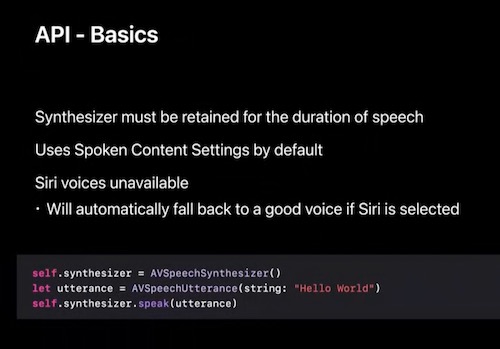 I started a thread at macrumors regarding similar problems configuring the system voice to speak text.

Not the answer you're looking for? Browse other questions tagged macos text-to-speech macos-catalina siri nsspeechsynthesizer or ask your own question.

1
C# SpeechSynthesizer - "No voice installed on the system"
14
How to get a list of ALL voices on iOS 9?
6
iOS text to speech: What decides the default voice returned by [AVSpeechSynthesisVoice voiceWithLanguage]?
10
NSSpeechSynthesizer get Siri voices on macOS
2
How to link to FreeGlut instead of Glut on macOS using cmake and find_package?
0
This package is incompatible