I am trying to run a simple HelloWorld C# .NET Core Console Application and I get this error. Being fairly new, I couldn't resolve it upon trying certain things mentioned in another answer. Please guide me on how to resolve it.

The error I get is:

The debug executable [PATH] specified in the [Project Name] debug profile does not exist. 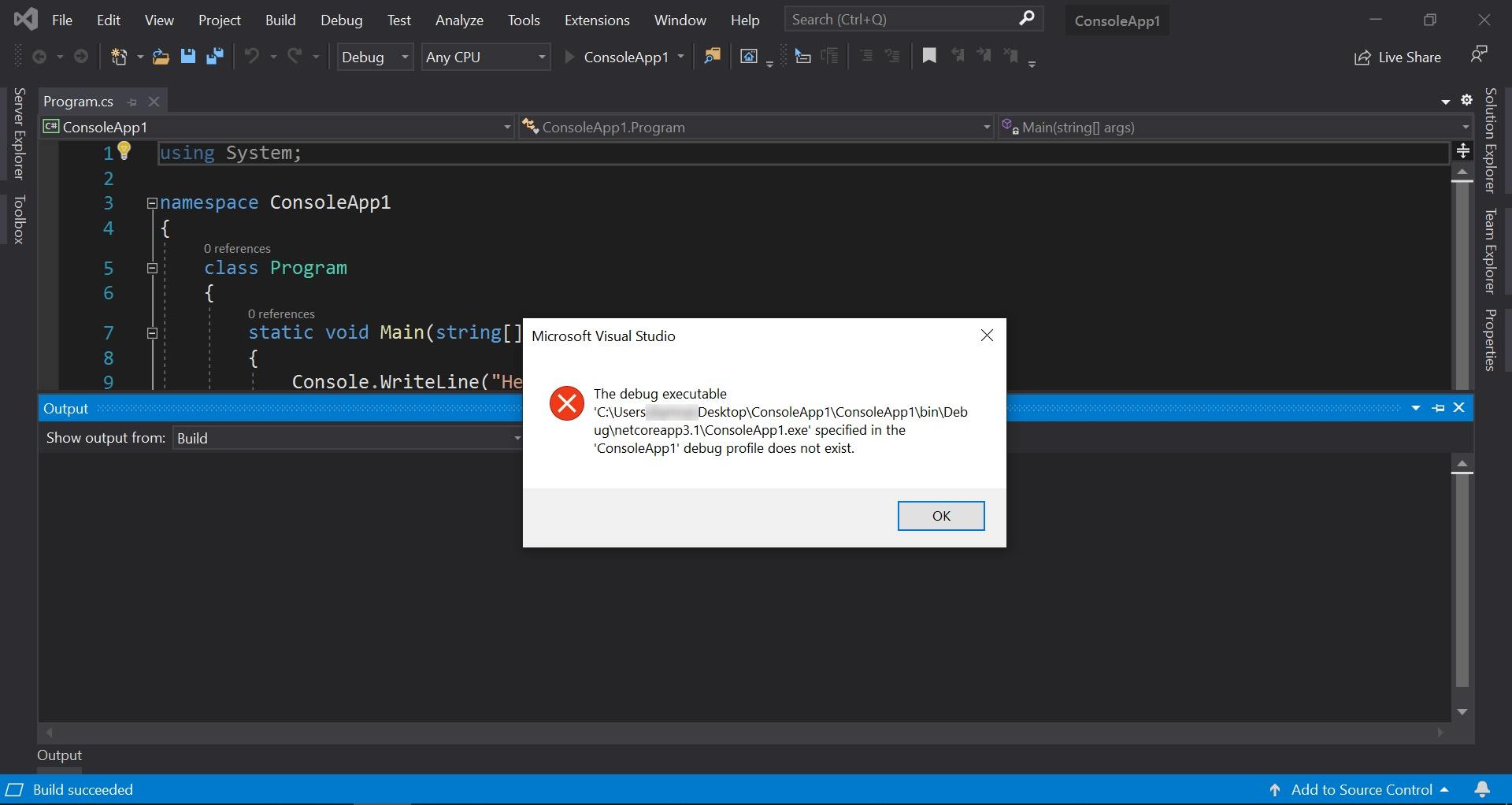 For me, all I needed to do was modify the Project Properties (right click the project in the Solution Explorer --> Project Properties), then under the Application tab, select an appropriate Target Framework. It was unset for me by default.

I had this problem very recently with a fresh installation of visual studio 2022. The error occurred when I attempted to run a project with the 5.0 DotNet Framework specified instead of the default which was 6.0. I fixed the issue by modifying my installation with the installer and manually selecting DotNet 5.0 Framework to be installed because apparently it is not installed by default and only 6.0 is. The error message wasn't in the least bit helpful at telling me what I had to do. But after that everything runs without error.

Like others here, (I upvoted a couple other answers) I tried multiple things for days and days, with no luck. In my case, a simple uninstall and reinstall of VS2019 didn't solve the problem. For me, the issue started with the VS2019 16.9.3 update, when suddenly projects that built fine before reported compile errors. The bizarre errors involved not being able to find references that were clearly there. I have a large solution with about 60 projects, of which 40 were .NET Framework 4.5.2, and 20 were .NET Core, a mix of 2.x, 3.x, and a few 5.x. At first, the compile errors affected both .NET Framework apps and .NET Core apps. I was not having this problem on my home computer, nor were my coworkers having this problem.

I tried tracking down potential NuGet configuration issues; I tried shortening the Win10 PATH statement, and nothing helped. Then, after the first uninstall/reinstall of VS2019 failed to make a difference, here is what I did that led to a successful result:

After all this, all the issues that weren't working, all the "Are you missing a using directive or an assembly reference" errors were now gone! Naturally, the needed steps will vary, based on your computer, and some of the steps I did may not have been truly necessary. After several unproductive days of nothing fixing the issue, it was time to go all-in. What a relief to have Visual Studio "just work" again!

To solve your problem, you need to start a VS2019 as administrator and with this the project build will work normally.

Note: In my case the vs2019 is professional.

For me, a wrong -path in the projectname.csproj.user was the problem. This drive me nuts! After deleting this file and rebuild the project, it finally worked.

I had a duplicate .AssemblyInfo.cs file within my project (one in the bin folder and one outside). This file is auto generated so what I did was removed both files, cleaned the project, ran a restore and then a rebuild. Fixed my issue.

I have changed my solution name, it occurs this error. Then I changed all using packagename to correct one, then rebuild it. It works correctly.

The reason you are getting this error is because you do not have an exe file in your netcoreapp folder. Try and create a new project called HelloWorld1 and if VS19 doesn't create the files, you will need to uninstall and reinstall the application.

Solution for Azure Functions in VS2022

I tried multiple solutions for many days, but the only thing that worked for me was completely removing VS 2019 and then re-installing.

For me it was just that I accidentally tried to open a project created in VS 2022 with Visual Studio 2017.

37
C# Debug - cannot start debugging because the debug target is missing
1
Taking an intro to programming/VB.NET class and my professor can’t open my sample program