I need to implement the following code however in a matrix form. I need to get the source vertex and randomly generate the connected graph. However, the pseudo-code is in the list form and I am not sure if I converted it to the matrix form correctly, for the output for some reason i keep getting all the nodes to be fully explored or the color of them all becomes black? 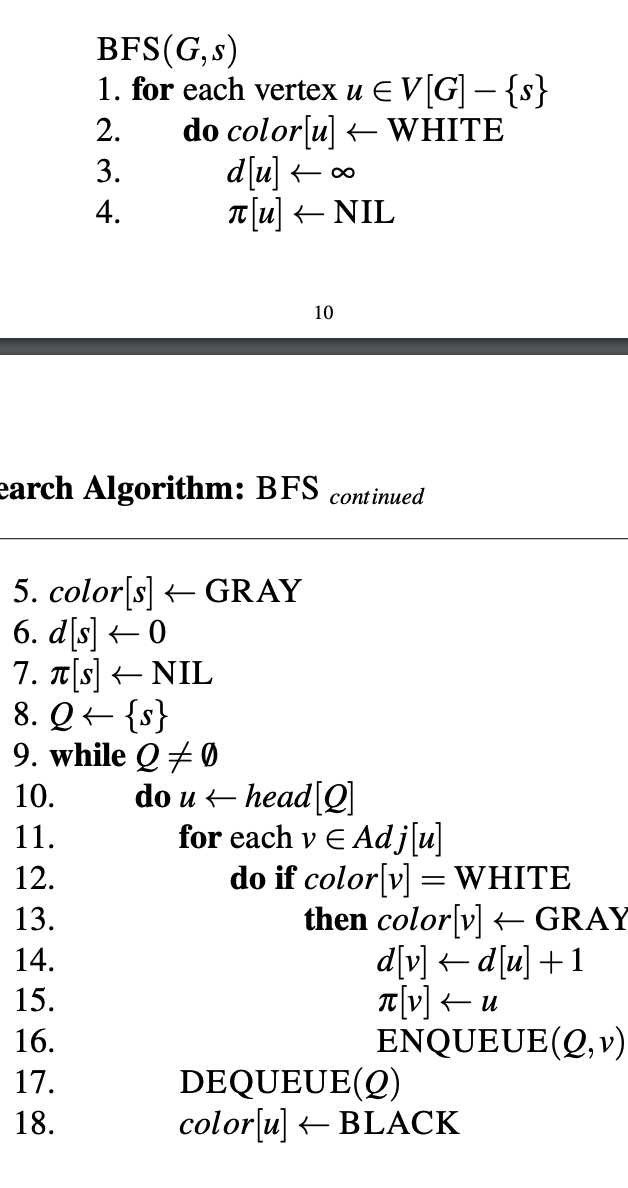 You just seem to have occasionally mistaken u with v and not taken into consideration the identation from the pseudo code.

was meant to be after the for. Also, you did

with u. Again, the same mistake earlier:

when you should have written this(with u):

with u instead of v. It doesn't really make any sense otherwise.

I deeply suggest reading the logic behind BFS. https://www.geeksforgeeks.org/breadth-first-search-or-bfs-for-a-graph/

In case you do actually know the logic behind BFS and just happened to do these mistakes, here are 2 debugging tips that helped me understand what was going wrong:

Edit: About the random generation, as is right now, it's not actually that random. You should use a random generator with a seed, such as current time, to actually get a new tree each time.

In c++, there is srand, and here you can see a quick example from https://www.cplusplus.com/reference/cstdlib/srand/ about getting actual random numbers from srand ( simply initialising it without argument will make it pick the same seed each time and therefore give the same result However, we can fix it with getting the current time, as the current time will always be different, and using it as seed):

Your q.pop() is in the wrong place. Since it is in the middle of your for loop, you remove size entries from the queue for each vertex processed from the queue. What you want to do is move the q.pop() to be right after the u=q.front().

Not the answer you're looking for? Browse other questions tagged c++ algorithm graph-algorithm breadth-first-search clrs or ask your own question.