I am having problems to translate UIKit architecture patterns to SwiftUI. My current pattern is mostly MVVM with Coordinators/Routers. The MVVM part seems quite easy and natural with the addition of @ObservableObject/@Published. But the coordinating/routing seems unintuitive. The View and the coordination (navigation) functionality are tightly coupled in SwiftUI. It seems like it's not really possible to separate them apart from using the helper struct AnyView.

Here one example: I want to create a reusable row/cell in SwiftUI. Let say that this row in Production is quite complex therefore I want to reuse it. I want to place it also in another module so I can reuse it in multiple targets. (like iOS, macCatalyst, etc...) 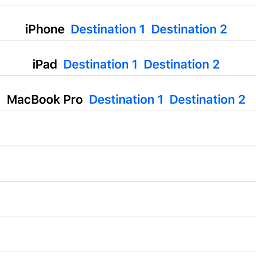 Now I want to control what happens when the user taps on that view or buttons in that view. Depending on the context I need to navigate to different destinations. As far I can see the possible NavigationLink targets have to be either hardwired into the view or AnyView has to be passed into the View.

Here some sample code. This cell/row contains two buttons. I want to navigate to some other view which is dependent on the context and not to be hardwired into the code:

This seems to be a major design flaw in SwiftUI. Reusable components with Navigation Links are basically not possible apart from using the AnyView hack. As far as I know AnyView is just used for specific use cases where I need type-erasure and has quite some performance drawbacks. So I do not consider this the idiomatic solution to create reusable, navigatable views with SwiftUI.

Is this really the only solution? Maybe I am totally wrong and this is anyway the wrong direction. I read somewhere (can't find the post anymore..) about using some central state which indicates which view to show but I saw no concrete example how to do this.

2nd challenge: Also I do not want the cell to react on any other taps then on the buttons. But it seems not to be possible to control where the cell Navigates to if tapped. (so not tapping on one of the buttons but anywhere in the cell) In the current sample code it navigates (for any reason) to "Destination 2".

It is better to use generics for your row, as below (tested with Xcode 11.4)

Update - added block for row highlight. List has auto detection for button or link inside row and highlights if any standard (!key) present. So, to disable such behaviour it needs to hide everything under custom button style.

Not the answer you're looking for? Browse other questions tagged ios swift mvvm swiftui coordinator-pattern or ask your own question.

252
How should the ViewModel close the form?
271
How to present UIAlertController when not in a view controller?
13
SwiftUI: Animate Text color - foregroundColor()
95
NavigationLink Works Only for Once
2
How do I reset a selection tag when pushing a NavigationLink programmatically?
8
SwiftUI Button inside a NavigationLink
94
SwiftUI - how to avoid navigation hardcoded into the view?
1
SwiftUI button inactive inside NavigationLink item area
1
Need help getting NavigationLink to work in SwiftUI