Git: Changes keep getting lost due to seemingly random merges

I have a feeling this will be an obvious answer, but I can't seem to work it out.

What appears to happen is that I commit/push some changes to the server and everything appears fine on my copy.

Another developer then pulls from the server from the same branch (allegedly seeing my changes, as far as I'm aware), makes some modifications, commits them to their own local copy then finally pushes it back to the server.

Somewhere in the middle of doing this my changes get lost as their push (326c8fd0...) causes a merge with lots of delete/add lines resetting the repository back to a much older revision. This has happened a few times now even with fresh copies of the repository.

The highlighted line below (8def6e9..) was a commit I made, the following commits should have been on this same branch assuming the other developer pulled the changes. A merge happens at 326c8fd0 which ends up resetting the repository incorrectly, losing previous changes. 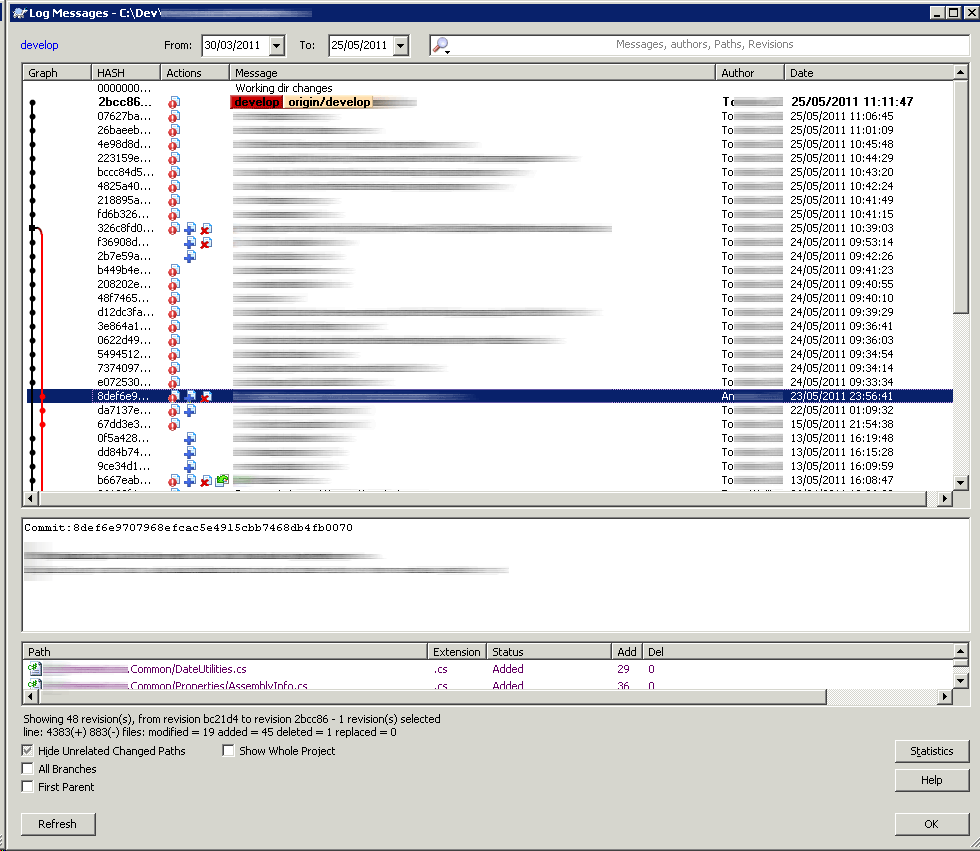 Am I missing something very obvious as to why this is happening? We're both using TortoiseGit.

Sorry for the probably vague explanation.

git version-control tortoisegit
Share
Improve this question
asked May 25 '11 at 22:33

The ours strategy completely ignores any content changes made in the history all parents but the first. You can usually identify this type of merge because the merge commit and its first parent (i.e. their changes) will have identical trees (i.e. git diff f36908d 326c8fd0 would show no differences).

The ours merge strategy option will also ignore changes from the history of the second parent (i.e. your changes), but only those that conflict with changes made in the history of the first parent (i.e. their changes). In this case, some changes from the second parent may make it into the result, but others may be dropped entirely.

The other likely alternative is that they are just making bad decisions while resolving conflicts generated during a default merge.

Either way, someone will probably have to talk to the user that did the merge to find out exactly what they did, and why they did it so that a policy can be devised to prevent the problem in the future.

To recover, you might redo the merge yourself and them merge the result into the current tip of the history:

Or, if you are okay with rewriting history:

If you are losing commits, ensure that neither of you is using --force or a force flag on your gui to get rid of rejected. Take a look at the explanation of the DAG.

Not the answer you're looking for? Browse other questions tagged git version-control tortoisegit or ask your own question.