So the description of the plugin is that it'll display suggestions of classes when am working on the markup, but it doesn't. I've reloaded the plugin countless times. I even restarted vscode and eventually re-installed it. Of course, I did the npm install tailwind and other utilities needed... I even have my tailwind.config.js file in my project if that helps to answer my question. Thank you.

I'm using tailwindcss in a react app. Tailwindcss Intellisense plugin was not working in my VSCode but then i installed HTML CSS Support extension and now i am getting suggestions of classes. 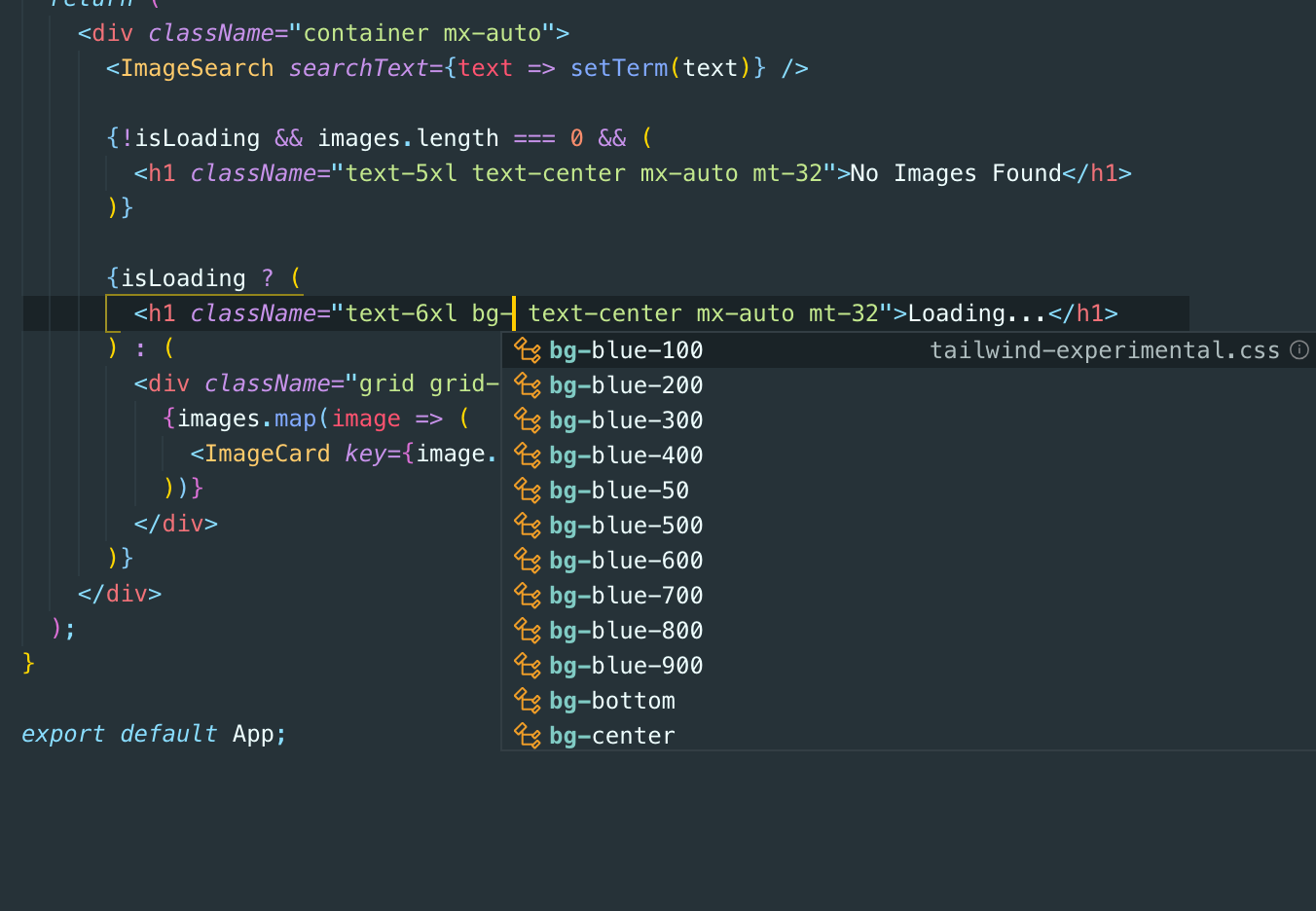 Its actually a pretty simple fix. open your settings.json file then add this to get the intellisense working on all files

This is the easiest way I found to get Tailwind IntelliSense to work with .js files to React. You need to do this every time you are adding a new class but it's quicker than checking the documentation every time.

What helped me was to check whether the plugin had any issue loading. You can do this by checking the output view:

For me the error was Failed to initialise: ReferenceError: defaultTheme is not defined - I was missing a require for the defaultTheme.

I installed 'IntelliSense for CSS class names in HTML', 'HTML CSS Support', 'CSS Peek' all together with reinstalling..

To anyone still facing this problem, I found that the tailwind extension doesn't recognize your tailwind.config.js file if it's untracked (not added to source control). Once I added the file and did git commit, the extension worked.

if you're using nuxt/tailwind module be sure to init tailwind.config.js as doc says.

then restart the vs-code. it should automatically be active.

I'm using tailwind + create-react-app + typescript, I solved it by changing the extension setting "Tailwind CSS: Include Languages", to {"plaintext": "ts"}.

I don't know why it didn't work in the first place, it was working for my other projects.

Just go to the Tailwind CSS IntelliSense extension in Vs code and install the old version and reload it. It works.

This is the solution for autosuggestion on typing. So you don't need to use space+ctrl or just space. In case anyone needs it.

Without pressing ctrl-space, I just need to press space and the classes will come out.

I am using Tailwindcss with Django.
Facing the same issue where Tailwindcss IntelliSense plugin is already installed and autocomplete wasn't working.

Finally I got the perfect solution.

For most projects (and to take advantage of Tailwind’s customization features), you’ll want to install Tailwind and its peer-dependencies via npm.

In my case the postcss and autoprefixer was not installed.
You can run the above command and npm will take care of it if you have Tailwindcss already installed.

Also don't forget to put these lines in your settings.json in VSCode (Recommended VS Code Settings for Tailwind CSS IntelliSense):

I disabled and re-enabled the plugin. Wait a bit for it to re-indexing. And it works.

I fixed it by creating a tailwind.config.js file with the help of npx tailwindcss init command. I was following tutorials of net ninja (youtube channel) and he mentioned this solution.

If you are using tailwind with react, typescript, javascript, styled-components, and twin-macro, you have to add classRegEx manually to get the IntelliSense

To achieve this edit the user settings as below

This setting is good working for react.js application

At first, write in your project npm install tailwindcss postcss-cli autoprefixer, Then write in your terminal npx tailwind init, at last write npm tailwind"postcss.config.js and then write in the file:

last step u can build your tailwindcss in packagein accordance with the package.json.

For more info u can visited this link.

Solution: We can therefore fix the issue by simply running

within our project directory.

Make sure that you open the project from its root folder. I happened to me that there were multiple package.json files in the a different folder, the VS code plugin will be confused with tailwindcss path.

Just open the Explorer view and you should see one and only one package.json file and tailwindcss is listed as the dependencies.

For React project with .tsx file, adding this works for me.

I did Smit @Barmase solution but also added "plaintext" and "tsx".

Now everything works when I hit space after previous class.

In my case, the code completion not working without the start tag >.

Strictly speaking, it doesn't work without the start tag >. But My best practice is to write the closing tag and then write the class.

I had the same issue I just fixed it by updating VS Code.

Had the same issue with Intellisense, the output in VSCode for the "TailWind CSS IntelliSense" had

This seemed to be coming from the postcss-nested plugin, however after reading a few other SO posts on the similar issue it actually came down to my setup.

The main project folder was failing to parse a file that existed inside a sub-project (td;lr. using a wordpress theme git repo that is build with the template as the root).

Not sure if that might be similar to your setup, but what is suggested is checking the package versions, and that your tailwind config files (if any) are setup right.

The moment you fix it, you should immediately be able to see in the Output tab for "TailWind CSS IntelliSense" something similar to the following....

Hope there's something you can take away from this. :)

The extension HTML CSS Support extension is not the correct way to go. As specified in the official installation section of the detail page in the extension page in VSC.

My issue was with the tailwind.config.js. Since I followed the Tailwind installation step by step, I put the content as

While I had no src folder, rather my html file was at the root. So I changed it to below and the IntelliSense started working.

So just in case someone is making this silly mistake like me :)

Just install the extension Tailwind CSS IntelliSense in VS Code and you are good to go.