I use WebClient type to upload *.cab files to my server. On the server side, I registered a HTTP handler for *.cab file with the PUT method as below:

But I always get a "405 method not allowed" error. The response said the allowed methods are as below:

Even if I explicitly allow the PUT method in the IIS Request Filtering for my web application, the same error still occurs.

I suspect this is a IIS related issue. I'm hoping someone could shed some light on this for me.

Often this error is caused by the WebDAV module that try to handle this kind of requests. An easy solution is to remove it from modules and from handlers of the system.webServer section just inside your web.config file. Here a configuration example:

I enabled the Failed Request Tracing, and got the following info:

So, I uninstalled the WebDAVModule from my IIS, everything is fine now~

I tried most of the answers and unfortunately, none of them worked in completion.

Here is what worked for me. There are 3 things to do to the site you want PUT for (select the site) :

Taken from here and it worked for me:

I had this problem with WebDAV when hosting a MVC4 WebApi Project. I got around it by adding this line to the web.config:

Best to just remove the unused WebDAV feature. Go to Programs and Features => Turn Windows Features On or Off and disable WebDAV Publishing under 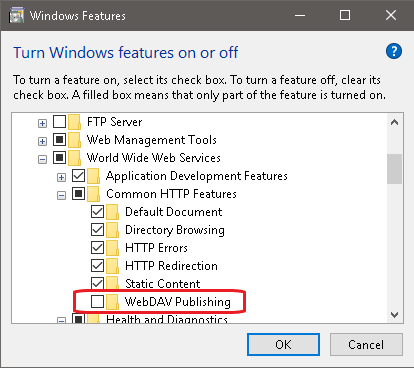 Removing the WebDAV-module should be sufficient. Just change your Web.config:

I was using Angular 8 and was .NET core API. I add the following in my service web.config file. That resolve my error.

Here is what worked for me:

I had the same problem, with a RESTful API running on aspnet core.

I didn't want to uninstall the WebDAV, and I tried most of the remedies described above. I tried to set the verbs="*" both on the site and on the server itself, but without success.

What did the trick for me was the following:

After that everything worked, even if I replaced the original WebDAV options.

For whatever reason, marking WebDAVModule as "remove" in my web.config wasn't enough to fix the problem in my case.

I've found another approach that did solve the problem. If you're in the same boat, try this:

This prevents WebDAV from rejecting verbs that it doesn't support, thus allowing a PUT to flow through to your RESTful handler unmolested.

I had the same issues with PUT, PATCH and DELETE but didn't have anything with WebDav installed. Resolution 1 in this article finally helped me: http://support.microsoft.com/kb/942051

Another tip from me. I have used PHP + IIS, and the Handler Mappings for PHP did not have the PUT verb.

For me this error wouldn't go away and allow PUT methods, whatever i did.. uninstalled webdav, put configuration in web.config to remove webdav from handlers and modules, and set up PUT as an allowed verb on the request filters on iis.. and ensure iis handler mappings handling the request had PUT configured..

My problem was eventually due to bad installation of ASP.NET 4.5 Extensions. Removed everything related to asp.net from server roles and features. restarted. readded the roles and restarted. everything worked with above config.

--- The below will make PUT be accepted, but will send it to the wrong handler. --ignore the below

finally, adding PUT verb as allowed verb on TRACE handler mapping on iis worked.. since i had enabled failed error tracing, and this verb was not allowing the verb.

last time i had the same problem on another server's IIS, it was due to a missing '/' at the end of the URL since it was using a default handler without using the default document probably and now i realize that.. so check IIS handler mappings if nothing else helps.

I had this problem but nothing related to WebDAV was the issue. In my case, the client was sending a POST to www.myServer.com/api/chart. This call should be handled by the "ExtensionlessUrlHanlder-Integrated-4.0", however, somehow a local file structure was created in my server directory "...\Server\api\chart\". This meant that the "StaticFile" handler was being called instead. Deleting those local files finally solved the problem.

I have a same problem for PUT and DELETE request in IIS10 for asp.net core 5.

I just added below lines in web.config and problem is resolve.

You can do solve by other way from IIS also.

In IIS, select the application

This is my solution, alhamdulillah it worked.

If IIS app pool is running under classic mode, make sure you have the following in your web.config

In my case I had relocated Web Deploy to another port, which was also the IIS port (not 80). I didn't realize at first, but even though there were no errors running both under the same port, seems Web Deploy was most likely responding first instead of IIS for some reason, causing this error. I just moved my IIS binding to another port and all is well. ;)

To prevent WebDav from getting enabled at all, remove the following entry from the ApplicationHost.config: <add name="WebDAVModule" />

The entry is located in the modules section.

Exact location of the config: C:\Windows\System32\inetsrv\config\applicationHost.config

If you are only developing on your machine, using IIS to run your application and you are not going to use WebDAV then just go to Control Panel > Add or Remove Windows features and disable WebDAV 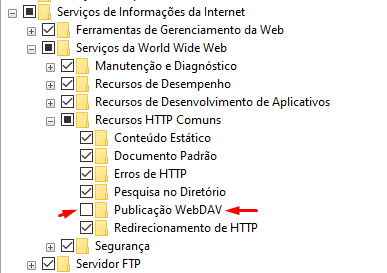 Not the answer you're looking for? Browse other questions tagged iis iis-7 or ask your own question.

98
enabling cross-origin resource sharing on IIS7
59
IIS 7.5 + enable PUT and DELETE for RESTFul service, extensionless
7
HTTP OPTIONS request on Azure Websites fails due to CORS
12
IIS7.5 Gives 500 Internal Server Error when trying to use DELETE verb
3
HTTP PUT not allowed in ASP.NET Web API2 with CORS and AttributeRouting
2
Okhttp Put method returning 'Method Not Allowed'
0
angular $resource works with IIS express but not IIS ? I think something is wrong with the PUT?
1
After uninstalling WebDav on Windows Server 2016 it pops back to life after a day
0
ASP.NET Web Site Not Allowing Axios PUT Access (405 Method Not Allowed)
0
How make a request in the browser to a DELETE http method in ASP.NET (.NET FRAMEWORK)
See more linked questions