Related to Is there a "null coalescing" operator in JavaScript? - JavaScript now has a ?? operator which I see is in use more frequently. Previously most JavaScript code used ||.

In what circumstances will ?? and || behave differently?

These operators are often used to provide a default value if the first one is missing.

But the OR operator || can be problematic if your left value might contain "" or 0 or false (because these are falsy values):

In many cases, you might only want the right value if left is null or undefined. That's what the nullish coalescing operator ?? is for:

While the ?? operator isn't available in current LTS versions of Node (v10 and v12), you can use it with some versions of TypeScript or Node:

When the nullish coalescing operator ?? is supported, I typically use it instead of the OR operator || (unless there's a good reason not to).

The Nullish Coalescing Operator distinguishes between nullish (null, undefined) and falsey but defined values (false, 0, '' etc.). See the graphic below for more information.

For || (logical OR) nullish and falsey values are the same.

I created a simple graphic to illustrate the relationship of nullish and falsey values in JavaScript: 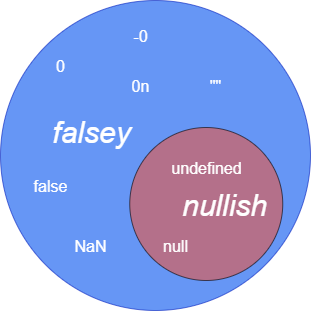 Using what we learned above we can create a few examples for different behavior:

Since the new Nullish Coalescing Operator can differentiate between no value and a falsey value, it can be beneficial if you, for example, need to check if there is no String or an empty String. Generally, you probably want to use ?? instead of || most of the time.

Last and also least here are the two instances where they behave the same:

As a very short rule, you could look at it the opposite way:

Here are few rules for how to determine which one you need. The simplest tests:

The second one is where it actually gets trickly. How do you know you need to discard falsy values? Well, the very first snippet shows what happens if you do that: f(0) will discard the zero and thus produce a different result. This is a somewhat common source of bugs. Since the construct a = b || c is common to introduce a fallback value (in this case c) it might accidentally fall back to it when you didn't mean to.

This works if you want to provide a fallback for calling updateAge() (no argument) but fails if you call updateAge(0) (no update). Similarly, you could have:

To generalise, if you are providing a fallback value that's different to the falsy value, then you might have a problem. However, if your fallback is the falsy value - num || 0 or str || "" then it doesn't really matter.

It's rare (or should be) that you might expect a mixed type (number, or string, or object, etc) and provide a fallback to it: input || fallback is valid but will reject empty strings and zeroes. It's usually going to be wrong unless you explicitly don't want any of those.

To put it simply, you should likely use the nullish coalescing operator ?? at all times. It will be less cognitive load to figure out whether it's a potential bug or not. There is also not much reason to avoid it. It's newer than the boolean OR, so it doesn't work on older environments, that's true, however nowadays you should likely be transpiling your code for those. If you cannot or prefer not to, then you don't have a choice and should use the boolean OR.

As described in the MDN:

Contrary to the logical OR (||) operator, the left operand is returned if it is a falsy value which is not null or undefined. In other words, if you use || to provide some default value to another variable foo, you may encounter unexpected behaviors if you consider some falsy values as usable (eg. '' or 0). See below for more examples.

And also in the answer to the question you linked:

Regardless of the type of the first operand, if casting it to a Boolean results in false, the assignment will use the second operand. Beware of all the cases below:

When the || is being used as a boolean conditional that goes to false. For example:

The logical OR will still give the next value for anything that doesn't evaluate to true. So it gives the value 21 in this case. Where ?? only handles null and undefined.

Base on MDN docs:

Contrary to the logical OR (||) operator, the left operand is returned if it is a falsy value which is not null or undefined.

Real Example: Assume, we have a phone variable that is not mandatory in our form and the empty string ('') is valid for us and we wanna doSomething() if the phone variable is null or undefined, now guess what:

Note: actually it is an example and in a real project you can have a better sense of this lovely operation usage.

Attention: for the undefined or null both of them act like each other.

Not the answer you're looking for? Browse other questions tagged javascript logical-or or ask your own question.

6
Difference between || and ?? operators
-1
Js difference between ?? and || with numbers
0
double question mark vs && in javascript
1498
Is there a "null coalescing" operator in JavaScript?
380
JavaScript OR (||) variable assignment explanation
287
What does the construct x = x || y mean?
244
Is returning out of a switch statement considered a better practice than using break?
102
What does "var FOO = FOO || {}" (assign a variable or an empty object to that variable) mean in Javascript?
3
Any difference between x || [] and x ?? [] in javascript?
0
Shorter way to write a ternary operator in JS
See more linked questions