In C#, what is the difference between public, private, protected, and having no access modifier?

All my college years I have been using public, and would like to know the difference between public, private, and protected?

Also what does static do as opposed to having nothing?

The type or member can be accessed by any other code in the same assembly or another assembly that references it.

The type or member can only be accessed by code in the same class or struct.

The type or member can only be accessed by code in the same class or struct, or in a derived class.

The type or member can only be accessed by code in the same class or struct, or in a derived class from the same assembly, but not from another assembly.

The type or member can be accessed by any code in the same assembly, but not from another assembly.

The type or member can be accessed by any code in the same assembly, or by any derived class in another assembly.

The static modifier on a class means that the class cannot be instantiated, and that all of its members are static. A static member has one version regardless of how many instances of its enclosing type are created.

A static class is basically the same as a non-static class, but there is one difference: a static class cannot be externally instantiated. In other words, you cannot use the new keyword to create a variable of the class type. Because there is no instance variable, you access the members of a static class by using the class name itself.

However, there is a such thing as a static constructor. Any class can have one of these, including static classes. They cannot be called directly & cannot have parameters (other than any type parameters on the class itself). A static constructor is called automatically to initialize the class before the first instance is created or any static members are referenced. Looks like this:

Static classes are often used as services, you can use them like so:

A graphical overview (summary in a nutshell) 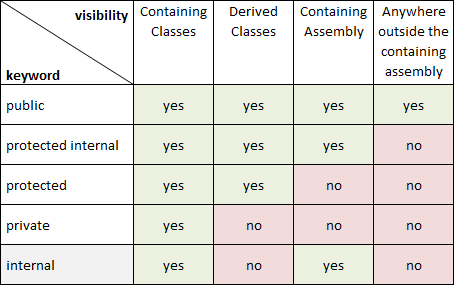 Actually, it's a little bit more complicated than that.
Now (as of C# 7.2), there's also private protected, and it matters whether a derived class is in the same assembly or not.

So the overview needs to be expanded:

See also the C#-dotnet-docs on the subject.

Since static classes are sealed, they cannot be inherited (except from Object), so the keyword protected is invalid on static classes.

For the defaults if you put no access modifier in front, see here:
Default visibility for C# classes and members (fields, methods, etc.)?

Also, there is the sealed-keyword, which makes a class not-inheritable.
Also, in VB.NET, the keywords are sometimes different, so here a cheat-sheet: 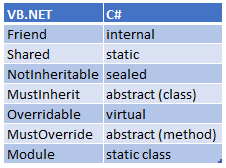 Private - If you are part of the class, then you can see the method, otherwise not.

Protected - Same as Private, plus all descendants can also see the method.

Static (class) - Remember the distinction between "Class" and "Object" ? Forget all that. They are the same with "static"... the class is the one-and-only instance of itself.

Static (method) - Whenever you use this method, it will have a frame of reference independent of the actual instance of the class it is part of.

Reposting the awesome diagrams from this answer.

Here are all access modifiers in Venn diagrams, from more limiting to more promiscuous: 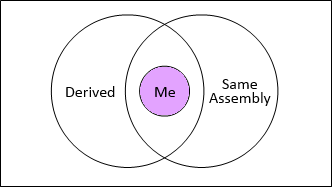 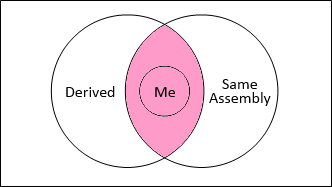 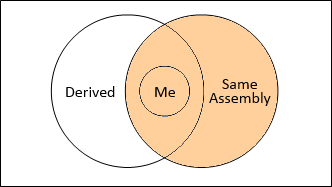 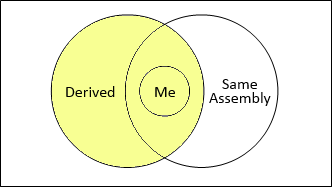 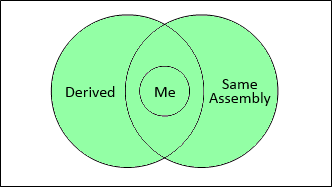 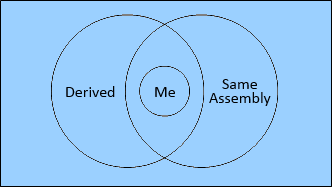 Yet another visual approach of the current access modifier (C# 7.2). Hopefully the schema helps to remember it easier
(click the image for interactive view.)

If you struggle to remember the two-worded access modifiers, remember outside-inside.

Regarding the question of Nothing

Public gives the method or type complete visibility from other types/classes.

Protected is similar to private except derived classes can also access protected methods.

"Nothing" is VB.NET's equivalent to null. Although if you're referring to "nothing" meaning "no access modifier", then it depends, although a very rough rule of thumb (certainly in C#) is that if you don't explicitly specify an access modifier, the method/variable declaration is usually as restricted as it can be. i.e.

is effectively the same as:

The linked MSDN article will offer a fully description when there's no access modifier explicitly specified.

Static means that you can access that function without having an instance of the class.

A status of Private indicates that variables can only be accessed by objects of the same class. Protected status extends that access to include descendants of the class as well.

"from the above table we can see the deference between private and protected... am think both are same ....so what the need for that two separate command"

In the above text 'accessed' means accessed via an object of the class type, which within a method of the class itself will be the implicit this object, or perhaps the method instantiates an explicit object of the current class type and accesses it through that object. Both are considered to be being accessed by the class itself and therefore the access rules are the same. This also applies to an access being performed from a static method, or when it is a static member / method being accessed, except the access is performed using the class scope and not and object. A member / method of a static class needs to be explicitly made static or it won't compile.

Classes that are not nested can either be public or internal and are internal by default. Classes that are nested can be any access type, and if the parent class is static, it does not need to be static and neither do its members. An internal class means that it can only be instantiated or its static members accessed from the current assembly.

Careful! Watch the accessibility of your classes. Public and protected classes and methods are by default accessible for everyone.

Also, Microsoft isn't very explicit in showing access modifiers (public, protected, etc.. keywords) when new classes in Visual Studio are created. So, take good care and think about the accessibility of your class because it's the door to your implementation internals.

Those access modifiers specify where your members are visible. You should probably read this up. Take the link given by IainMH as a starting point.

Static members are one per class and not one per instance.

I think it is related to good OOP design. If you are a developer of a library you want to hide the inner workings of your library. That way, you can modify your library inner workings later on. So you put your members and helper methods as private, and only interface methods are public. Methods that should be overwritten should be protected.

public: The member declared with this accessibility can be visible within the assembly containing this member, or any other assembly that references the containing assembly. i.e., access is not limited.

In C# 7.2, a new level of accessibility was added:

private The type or member can be accessed only by code in the same class or struct.

internal Internal types or members are accessible only within files in the same assembly.

private protected The type or member can be accessed by types derived from the class that are declared within its containing assembly.

With C# 11 you can also use the file access modifier.

I have created another type of visualization. Maybe this can be better way to understand for someone 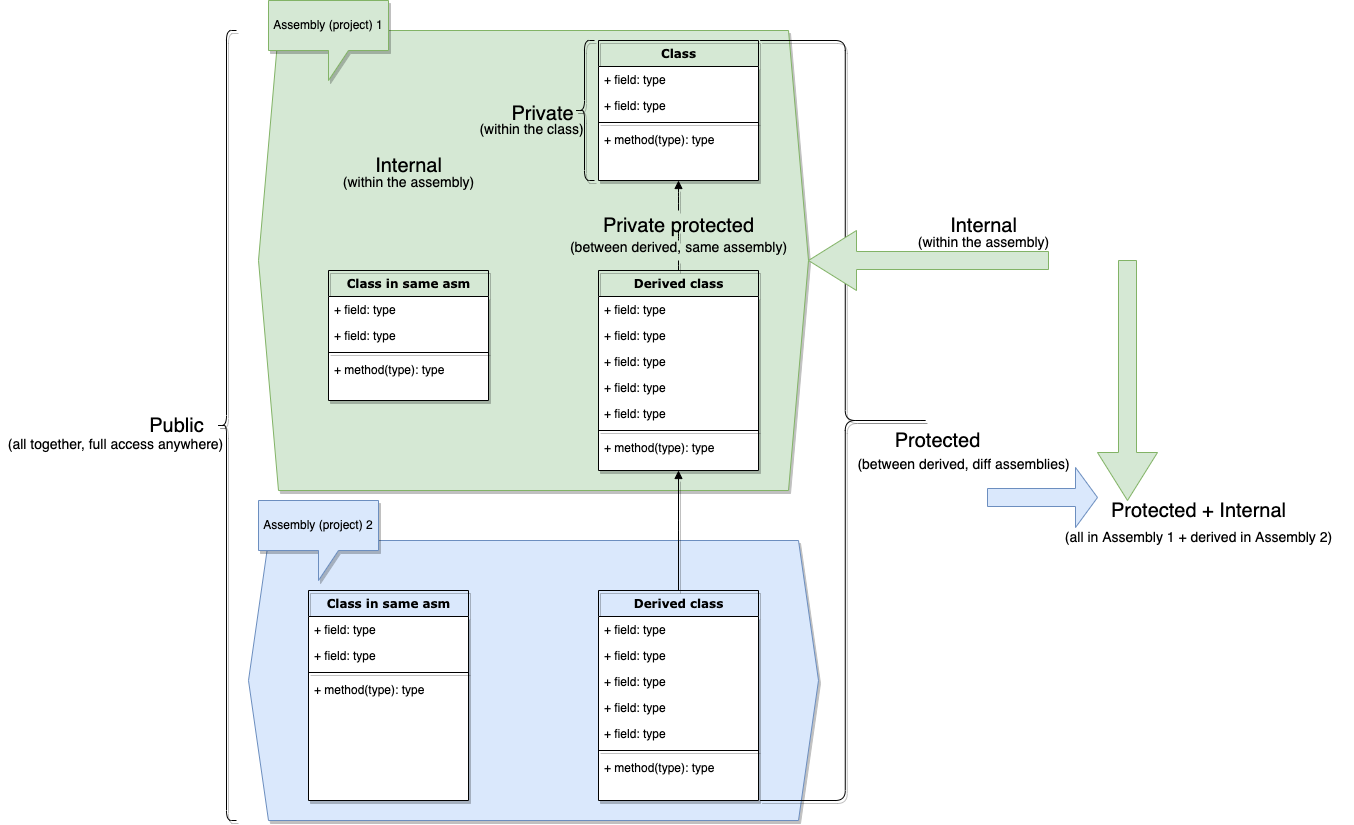 14
Confusion: Internal, Protected and Protected Internal
4
C# : Difference between method types
-4
Can someone please explain what is protected override void?
1
Could we use static method outside class in java
2
what is the difference between protected and private protected in c#?
2
What access modifier to use
-1
How to access private set properties in derived class
-6
I don't understand why a class is "public"
0
Method in another class 'does not exist' compiler error
0
Is There Any Capacity or Security matter With Class Formats?
See more linked questions