Can I show python code comments as markdown in jupyter?

Is there an extension which will allow you to convert this:

To be displayed in the next output cell as first the rendered markdown for A code *comment* and then the output of the second line?

Main use-case is for convenience when the markdown blocks are too small.

It'd be even better, though not required, if there is a way to only show some comments / comments in some cells like this and leave the others with their default behavior.

Inspired by @manisar's answer, I came up with a simple IPython magic that allows you to use an IPython / Juptyer notebook code cell to display markdown contained in the cell as a formatted string or f-string/string literal: fstring-magic 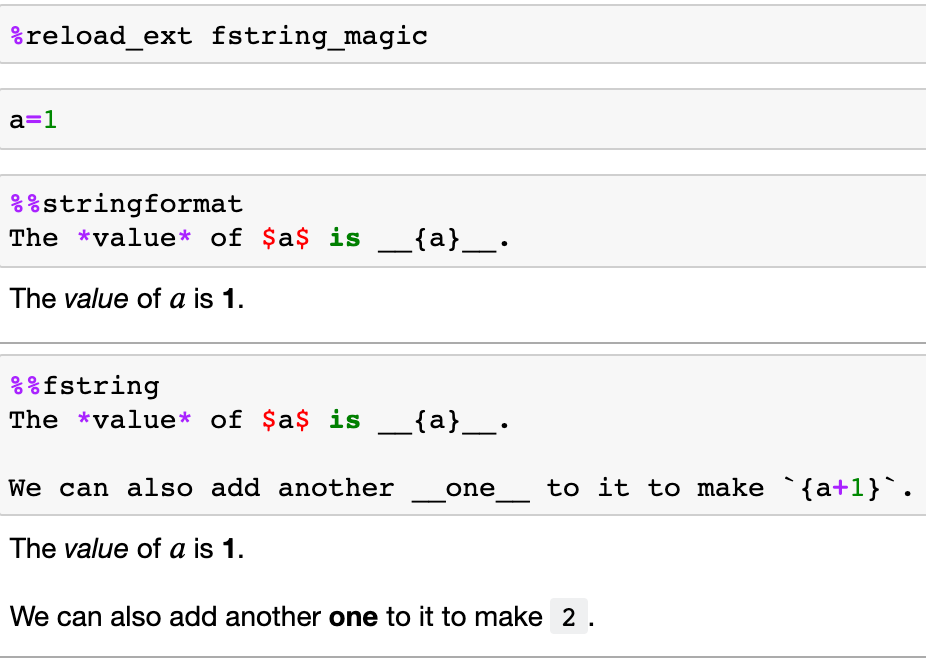 The following, not exactly doing what is asked, is a possible workaround. Until we get the requested extension, this may be used.

The code below will show markdown in IPython from within code cells, while ignoring it when run in normal Python (like usual comments). The constraint is to use strings instead of comments.

Note: I used forbiddenfruit just for aesthetics, that is not a requirement.

I placed the above in a separate file, and then I import it anywhere I need it.
After this, the following code (e.g.), when run as a normal script ignores the string-comments:

but when run in IPython, displays this (alongside executing the python code):

Considering that triple quoted strings are often used as multiline comments, this solution may be useful in many scenarios, and will not be a significant deviation from using normal comments.

On the plus side, there are two advantages:

Update: I created a github package with improved code and extra options that can be installed with pip. Check github.
Or you may copy the code.