What's the difference between deadlock and livelock?

Can somebody please explain with examples (of code) what is the difference between deadlock and livelock?

In concurrent computing, a deadlock is a state in which each member of a group of actions, is waiting for some other member to release a lock

A livelock is similar to a deadlock, except that the states of the processes involved in the livelock constantly change with regard to one another, none progressing. Livelock is a special case of resource starvation; the general definition only states that a specific process is not progressing.

A real-world example of livelock occurs when two people meet in a narrow corridor, and each tries to be polite by moving aside to let the other pass, but they end up swaying from side to side without making any progress because they both repeatedly move the same way at the same time.

Livelock is a risk with some algorithms that detect and recover from deadlock. If more than one process takes action, the deadlock detection algorithm can be repeatedly triggered. This can be avoided by ensuring that only one process (chosen randomly or by priority) takes action.

The main difference between livelock and deadlock is that threads are not going to be blocked, instead they will try to respond to each other continuously.

In this image, both circles (threads or processes) will try to give space to the other by moving left and right. But they can't move any further. 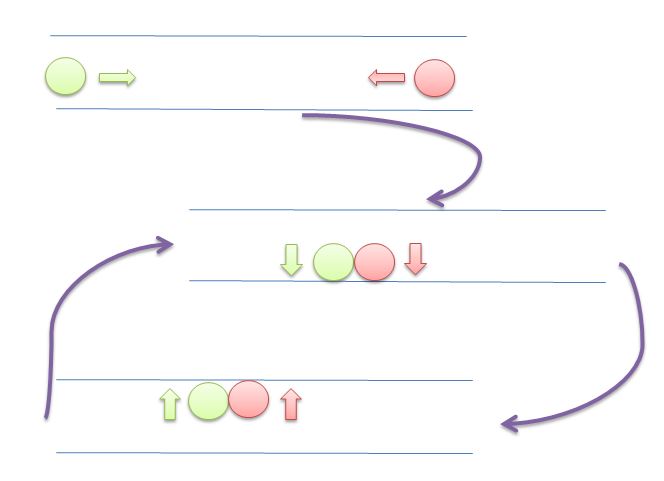 Deadlock: A situation in which two or more processes are unable to proceed because each is waiting for one the others to do something.

For example, consider two processes, P1 and P2, and two resources, R1 and R2. Suppose that each process needs access to both resources to perform part of its function. Then it is possible to have the following situation: the OS assigns R1 to P2, and R2 to P1. Each process is waiting for one of the two resources. Neither will release the resource that it already owns until it has acquired the other resource and performed the function requiring both resources. The two processes are deadlocked

Livelock: A situation in which two or more processes continuously change their states in response to changes in the other process(es) without doing any useful work:

Starvation: A situation in which a runnable process is overlooked indefinitely by the scheduler; although it is able to proceed, it is never chosen.

APPENDIX A - TOPICS IN CONCURRENCY

If both processes set their flags to true before either has executed the while statement, then each will think that the other has entered its critical section, causing deadlock.

[...] consider the following sequence of events:

And what about spinlocks?

Spinlock is a technique to avoid the cost of the OS lock mechanism. Typically you would do:

A problem start to appear when beginLock() costs much more than doSomething(). In very exagerated terms, imagine what happens when the beginLock costs 1 second, but doSomething cost just 1 millisecond.

In this case if you waited 1 millisecond, you would avoid being hindered for 1 second.

Why the beginLock would cost so much? If the lock is free is does not cost a lot (see https://stackoverflow.com/a/49712993/5397116), but if the lock is not free the OS will "freeze" your thread, setup a mechanism to wake you when the lock is freed, and then wake you again in the future.

All of this is much more expensive than some loops checking the lock. That is why sometimes is better to do a "spinlock".

If your implementation is not careful, you can fall on livelock, spending all CPU on the lock mechanism.

https://preshing.com/20120226/roll-your-own-lightweight-mutex/
Is my spin lock implementation correct and optimal?

Deadlock: situation where nobody progress, doing nothing (sleeping, waiting etc..). CPU usage will be low;

Livelock: situation where nobody progress, but CPU is spent on the lock mechanism and not on your calculation;

Starvation: situation where one procress never gets the chance to run; by pure bad luck or by some of its property (low priority, for example);

Spinlock: technique of avoiding the cost waiting the lock to be freed.

LIVELOCK Livelock conditions can arise when two or more tasks depend on and use the some resource causing a circular dependency condition where those tasks continue running forever, thus blocking all lower priority level tasks from running (these lower priority tasks experience a condition called starvation)

Maybe these two examples illustrate you the difference between a deadlock and a livelock:

Both examples force the threads to aquire the locks in different orders. While the deadlock waits for the other lock, the livelock does not really wait - it desperately tries to acquire the lock without the chance of getting it. Every try consumes CPU cycles.

Imagine you've thread A and thread B. They are both synchronised on the same object and inside this block there's a global variable they are both updating;

So, when thread A enters in the while loop and holds the lock, it does what it has to do and set the commonVar to true. Then thread B comes in, enters in the while loop and since commonVar is true now, it is be able to hold the lock. It does so, executes the synchronised block, and sets commonVar back to false. Now, thread A again gets it's new CPU window, it was about to quit the while loop but thread B has just set it back to false, so the cycle repeats over again. Threads do something (so they're not blocked in the traditional sense) but for pretty much nothing.

It maybe also nice to mention that livelock does not necessarily have to appear here. I'm assuming that the scheduler favours the other thread once the synchronised block finish executing. Most of the time, I think it's a hard-to-hit expectation and depends on many things happening under the hood.

Deadlocks occur when processes are granted exclusive access to resources.

These four conditions should be satisfied to have a deadlock.

If we found these conditions then we can say there may be occurred a situation like a deadlock.

Difference from deadlock and livelock

When deadlock happens, No execution will happen. but in livelock, some executions will happen but those executions are not enough to enter the critical section.

Not the answer you're looking for? Browse other questions tagged multithreading pthreads deadlock livelock or ask your own question.

400
Java: notify() vs. notifyAll() all over again
152
Good example of livelock?
175
How efficient is locking an unlocked mutex? What is the cost of a mutex?
39
Is my spin lock implementation correct and optimal?