Is there a way to do a checksum for a given Nuget package?

I've been looking for a way to check that a file hasn't been tampered. Is there a checksum for Nuget packages?

The files containing the 2 hashes mentioned above however are generated after the .nupkg file is retrieved from nuget.org and installed by the NuGet client, which kinda makes it impossible to check that the downloaded .nupkg hasn't been tampered with in the first place.

How is the integrity of the files ensured then ? Through a signature file called .signature.p7s, itself stored within the .nupkg file. The way to use the information in this file is by issuing a nuget.exe verify -all <nupkg_file>, as per the latest link above (nuget.exe can be downloaded from here).

Here's how the result looks like on a file that has been tampered with (for the test I've used the CommandLineParser NuGet package and had its license.md file removed from within the .nupkg file): 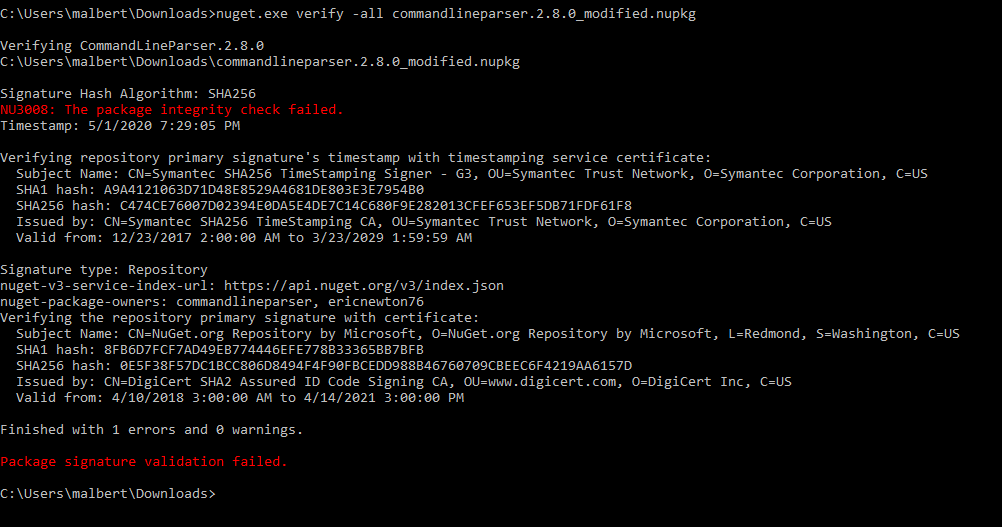 Not the answer you're looking for? Browse other questions tagged nuget checksum or ask your own question.

506
Getting a File's MD5 Checksum in Java
345
Generating an MD5 checksum of a file
907
Download old version of package with NuGet
673
How do I get NuGet to install/update all the packages in the packages.config?
164
NuGet Package Restore Not Working
92
Is there a way to automatically update nuget.exe in the .nuget folder when using package restore?
310
This project references NuGet package(s) that are missing on this computer
272
How do I enable NuGet Package Restore in Visual Studio?
295
NuGet Packages are missing
248
Assets file project.assets.json not found. Run a NuGet package restore