UIGestureRecognizer receive touch but forward it to UIControl as well

How would you allow a UIGestureRecognizer of a UIView to receive a touch event but also make sure that another, underlaying/overlaying UIView also receives that very same touch event?

Lets say I have got the following view-hierachie: 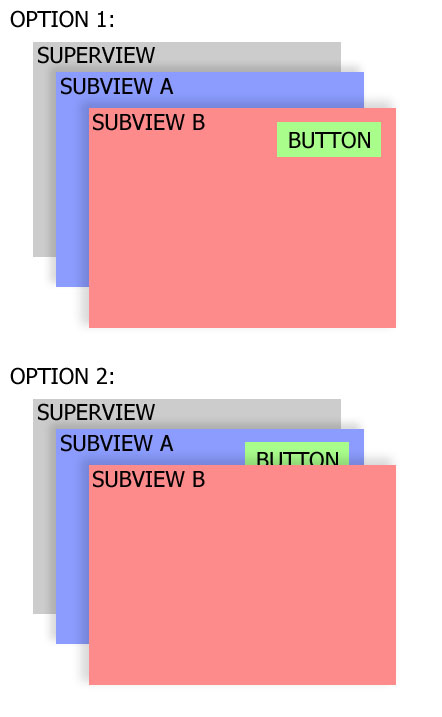 Views A (blue) and B (red) are both subviews of the same superview (gray). In other words, they are both siblings and the order decides on which of them covers the other.

If possible by any means, the solution should not involve extending the UIButton-class and manually forwarding any events from the button itself. Imagine view B would contain a lot more controls and not just a button. All of those controls should somehow allow view A to receive the touches on its UIGestureRecognizer.

I did provide two options as I do not care which of those views (A or B) comes first as long as both receive the touches.

All of my approaches so far abruptly reached dead-ends. Maybe a custom responder-chain would be a nice solution? I keep thinking that there must be an elegant solution within the entire UIKit/UIEvent/UIResponder stack.

Have you tried with this?

cancelsTouchesInView A Boolean value affecting whether touches are delivered to a view when a gesture is recognized.

58
Forwarding UIGesture to views behind