State.initState() must be a void method without an `async` keyword

![State.initState() must be a void method without an async keyword. how can i solve this probelms]1 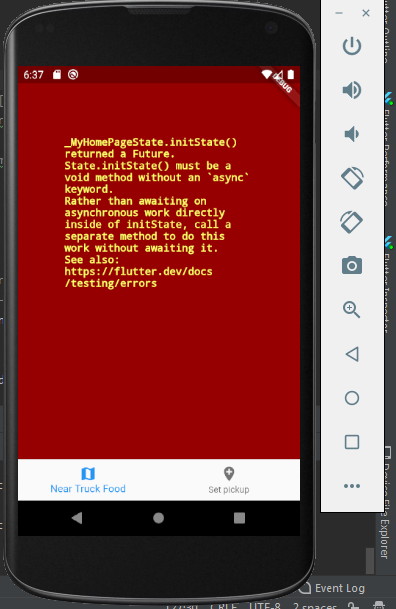 initState must be a method which takes no parameters and returns void. This is because it is overriding the method of the same name in the superclass (either StatelessWidget or State<StatefulWidgetType>. As such, this limitation is a contract which is fixed and binding; you cannot change it.

Of course, this also means that initState cannot be marked as async. This is because any method marked as async will implicitly return a Future, but if the method returns anything, then it cannot have a return type of void which breaks the override contract.

If you need to call an async method from within initState, you can do so simply by not awaiting it:

Instead, you need to have your widget build normally and then have a way to notify your widget to update when the Future has returned. This is most easily done with a FutureBuilder:

(Notice how instead of calling the async method from initState, I am calling it from the FutureBuilder during the build process.)

In these situations, instead of depending on snapshot.hasData to wait for data to appear, you can use snapshot.connectionState to monitor the state of the future itself:

Not the answer you're looking for? Browse other questions tagged flutter dart or ask your own question.

0
Error when filtering a List with data that came from json data, the method where was called on null

138
Flutter get context in initState method
248
Flutter: Run method on Widget build complete
140
Is there a way to load async data on InitState method?
59
How do I call async property in Widget build method
172
What's the difference between async and async* in Dart?
37
Good or Bad: Declaring main method async in Dart / Flutter
5
Why async keyword function without await keyword in Dart?
4
Flutter: Wait for async void method
6
Future<void> async vs simply void async in Dart
0
Dart async void