When the outter loop run about 150-200 times, chrome crashed.

How resolve this problem? Somewhere said that chrome maintain a deep history list, is the answer? 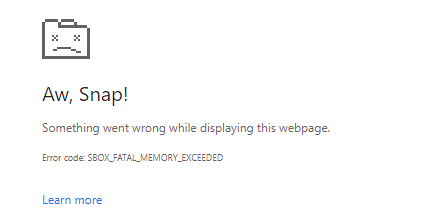 ...implies that there is a huge memory consumption issue in Chrome that cause tabs to crash with SBOX_FATAL_MEMORY_EXCEEDED error.

As per the article SBOX FATAL MEMORY EXCEEDED constantly and chrome is using large amounts of memory this issue of Chrome consuming huge memory is observed with all of the following instances:

As per the article Eset consumes major memory w/ Chrome with in ESET Security Forum:

As per the ESET support article KB3415 he most effective solution would be to enable pre-release updates in ESET Windows home products. Steps:

We have discussed this issue at length within the discussion ESET causing excessive renderer memory usage and the issue had been removed from the queue.