When I run Ruby commands like gem -v I get this error:

First of all I don't understand what this means. /Users/kristoffer is not in my path according to echo $PATH. The result of echo $PATH is:

As you can see, the PATH is pretty clean. Just the default path + what RVM added.

However, I'm pretty sure that it's a bad idea to make my Home folder non-writeable, right? I've repaired permissions using Disk Utility and it didn't find anything wrong with the permissions on my Home folder.

Any idea of what the problem is and how I can fix it?

Your home folder should only be writable by you, not by anyone else. The reason gem is complaining about this is that you have folders in your PATH that are inside your (insecure) home folder, and that means that anyone who wants to could hack you by renaming/moving your .rvm folder and replacing it with an impostor.

To fix your home folder, run chmod go-w /Users/kristoffer. If there are any other insecure folders on the way to anything in your PATH, you should fix them similarly.

BTW, the reason that Disk Utility didn't repair this is that it only repairs files installed as part of the OS (see Apple's KB article on the subject). There is an option to repair home folder permissions if you boot from the install DVD and run Password Reset from the Utilities menu, but I'm not sure if it resets the permissions themselves or just ownership.

I kept getting this in my prompt.

I couldn't get it quite right with my command prompt but this ended up working. 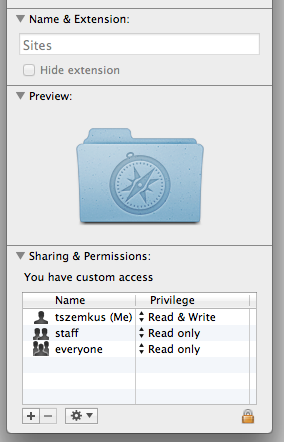 Recently this just happened to me and it has to do with a bug in upgrading to Mac OSX 10.9.3. Looks like the upgrade changes the permissons to the User folder. Here's an explanation and a fix:

Should fix the problem...

Not the answer you're looking for? Browse other questions tagged ruby macos permissions path or ask your own question.