How to highlight SQL keywords using a regular expression?

This of course is not comprehensive (can ignore escapes within a string), but I'd like to start here.

Here are a few examples:

The only way I thought to do it in a single regex would be with a negative lookbehind...but then it would not be fixed width, as we don't know when the string starts. Something like:

But this of course won't work:

Would something like this be possible to do in a single regex?

A suitable regular expression is likely to get pretty complex, especially as the rules evolve further. As others have noted, it may be worth considering using a parser instead. That said, here is one possible regex attempting to cover the rules mentioned so far:

As can be seen in the above visualisation, the regex looks for either a double or single quote at the start (saved in capturing group #1) and then matches this reference at the end via \1. The SELECT and FROM keywords are captured in capturing groups #2 and #3. (The (?:x|y) syntax ensures there aren't more groups for other choices as ?: at the start of a choice excludes it as a capturing group.) There are some further optional details such as limiting what is allowed between the SELECT and FROM and not counting the final quotation mark if it is immediately succeeded by a word character.

It might also be necessary to exclude quotation marks from the "any character" parts. This can be done at the expense of increased complexity using the technique described here by replacing both instances of .* with (?:(?!\1).)*:

You could use capturing groups:

In this case $2 would refer to the first keyword and $3 would refer to the second keyword. This also only works if there are only two keywords and only one string on a line, which seems to be true in all of your examples, but if those restrictions don't work for you, let me know. 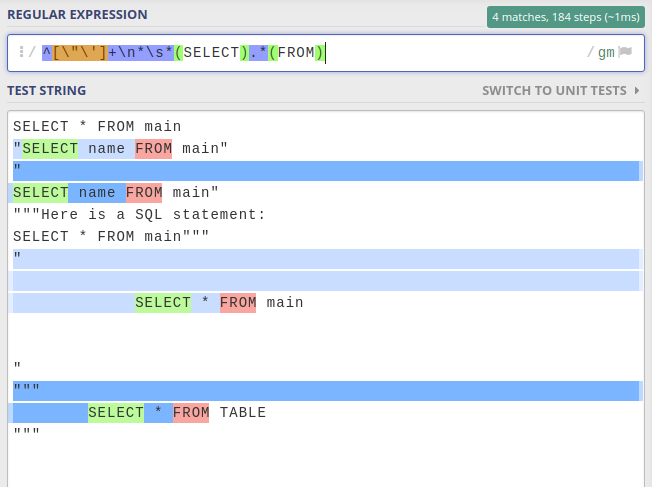 If you need to add other commands the thing may get a little trick, because some keywords doesn't apply. Eg: ALTER TABLE mytable or UPDATE SET col = val;. For these scenarios you will need to create subgroups and the regexp may become slow.

If I understand your requirements well I suggest that:

Update:
If you need to capture any special keyword after verifying existence of SELECT keyword after start of your string, I can update my solution to this:

Not the answer you're looking for? Browse other questions tagged regex parsing keyword or ask your own question.

50
Negating a backreference in Regular Expressions